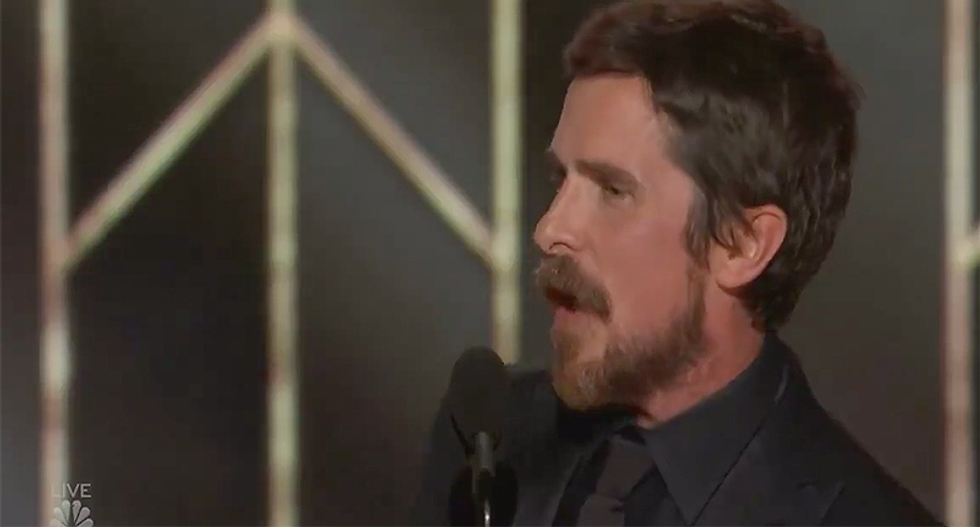 Actor Christian Bale accepted the Golden Globe award from the Hollywood Foreign Press Association for his role in the film "Vice."

Bale plays former Vice President Dick Cheney in a story that details the unique role he had in George W. Bush's White House.

According to Rotten Tomatoes, "Bale's transformation is a sight to behold." He donned prosthetics to achieve some of the key characteristics of Cheney, but capturing the so-called "evil" of Cheney was all Bale.

“Thank you Satan for the inspiration," Bale said about the biographical drama-comedy role.

He then offered a challenge to other actors, saying it was a kind of "competition."

"I will be cornering the market on charisma-free assh*les," he said. "What do you think, Mitch McConnell next? That would be good, wouldn't it?"

Rep. Liz Cheney (R-WY) tweeted an article about Bale's trouble with the law and an alleged assault on a woman and her mother. Cheney said that Satan probably inspired him to do that too.

It isn't surprising that conservatives lost their minds over the knock over the former vice president.

Naturally, the Church of Satan also responded with their own statement:

See the meltdown below. Clearly they haven't seen the film:

And the inevitable prediction:

Fox News will be coming after Christian Bale all day tomorrow Which means Trump will have some bizarre tweet about… https://t.co/htKDiHkvNd
— Don DiMello (@Don DiMello) 1546829255.0

And then there's the denial by Satan's publicist: