CNN's Cuomo zaps Women for Trump founder: 'You have crises all over the country that you don't give a damn about' 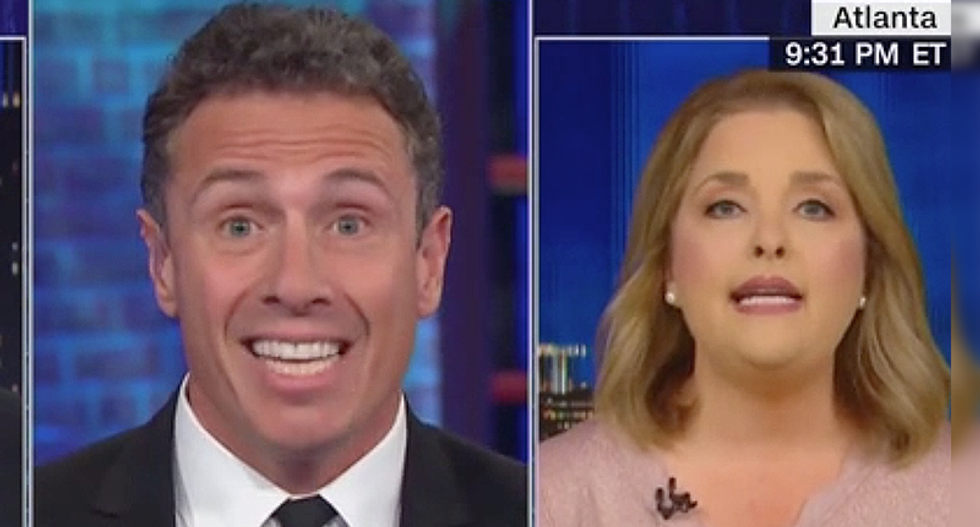 The founder of Women for Trump went down in flames during a panel discussion with CNN's Chris Cuomo.

"Then you have crises all over this country you don't seem to give a damn about," Cuomo said.

Indeed, Trump hasn't done anything for two years about human trafficking or the opioid crisis. In fact, the chief of the panel dealing with the opioid crisis was a former intern until Kellyanne Conway was put in charge. At that point, scientists and anyone involved in the panel reported they couldn't get her to respond to them.

"What about the opioid crisis, what about the human trafficking going on? Atlanta is one of the number one cities in the country dealing with this issue and it's happening across our southern border. Why would you not want to deal with that?" Kramer said.

"The question is not about what you want to deal with, it's how," Cuomo clapped back.

In an earlier segment, Cuomo had on a mother with her baby talking about how she can't afford to care for her family due to the shutdown. Cuomo asked Kreamer to explain how this shutdown is "an acceptable mechanism for change for this president."

"So this president has been trying to deal with this issue for the past two years," she said. "And last year in the spring he brought Democrats and Republicans to the White House and the Democrats wanted no part of it."

Cuomo cut in to tell them that the Democrats offered Trump a deal and offered funds for the wall. Trump wanted none of it because he wanted $20 billion. Now that he wants less money, he's refusing to take the previous deal.

Kreamer said that Trump plans to do other things with the money but Cuomo asked why he only talks about the wall. Kreamer explained the wall was "symbolic."

"What does that mean? Symbolic? This woman is worried about whether or not she can feed her kids because of his symbolism," Cuomo shot back.

That's when it got heated. Kreamer rejected Cuomo's assessment, saying that he was trying to "pit Americans against each other."

"What are you talking about? Who am I pitting against?" Cuomo asked.

"You tell me that one person is more important than the other. What about officer Singh's wife that just buried her husband two days ago that was murdered at the hands of an illegal immigrant in California?" she asked.

Cuomo said that if she wanted to talk about stopping wrongful homicides in the U.S. then the biggest concern shouldn't be undocumented immigrants. She turned to talk about fentanyl and drugs and again, such drugs come in from the ports of entry hidden in vehicles or through tunnels that go under the fence and barriers.

"Let's just slow down for a second because I want to get to solutions," Cuomo said. "The shutdown I posited to you is a lousy mechanism to get your wall and your money, you've got no answer for this."

"I think the objective is not to reopen the government but to secure our nation. That's the objective," she replied.

"Why do it on the backs of these American families?" Cuomo retorted.

"It shouldn't be done on the backs of the American families," she replied.

Cuomo explained that the mother with the baby is just one of many struggling to deal with this shutdown. So, Trump is indeed funding the wall on the backs of nearly a million federal workers and contractors who are not being paid.

"I'm just saying, doing it on the backs of American people with this shutdown, it should have never gotten to it and it's got to stop, Amy, I'm always happy to have you on the show even when you demonize," Cuomo said, telling her not to accuse him of doing something he isn't.

"You met that mother and her kid and there are many like her and she's doing this because the shutdown is hurting her family," he continued. "That's not pitting her against anybody, it's putting the facts out against a farce. There's a lot of Americans hurting. It's about not using them as a scapegoat for your inability to get a deal done. Luis, good first appearance. I'll see you again soon."