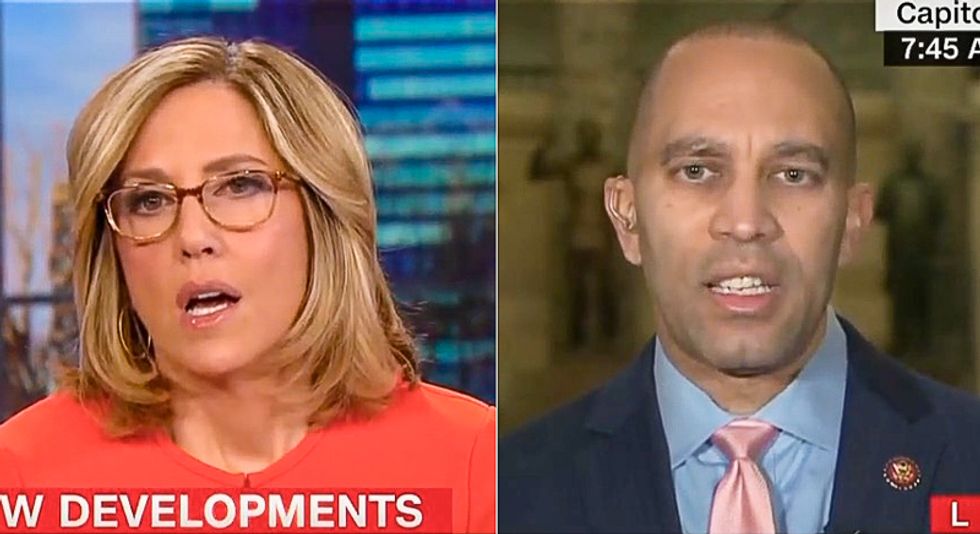 Rep. Hakeem Jeffries (D-NY) on Wednesday defended his assertion that President Donald Trump is the "grand wizard" of the White House by citing examples of racism by the commander in chief.

In a contentious interview on CNN, host Alisyn Camerota grilled Jeffries for calling Trump calling Trump "the grand wizard of 1600 Pennsylvania Avenue" at an MLK Day event on Monday.

"Do you regret going that far in your comments?" Camerota asked.

"But you called the president the 'grand wizard,'" the CNN host interrupted. "That's language of the KKK. You think the president of the United States is connected to the KKK? He's a klansman?"

But as Camerota pressed, Jeffries responded with examples of racism exhibited by Trump.

"Of course I don't believe that the president is a card-carrying member of the KKK," Jeffries said. "But it did capture a troubling pattern of racially insensitive and outrageous, at times, behavior that spans, not months, not years, but decades."

The congressman pointed out that Trump's bigotry dated back to the 1970s when the Trump Organization was sued by the federal government for housing discrimination.

Camerota tried to interject but Jeffries continued: "We haven't even gotten into the behavior that took place in the aftermath of Charlottesville or the s-hole comments about African nations or the fact that he's hired Steve Bannon, Sebastian Gorka, Steven Miller and a parade of other individuals connected to xenophobia and the alt-right."

"You make good points," Camerota conceded. "But, you know, the grand wizard? The reason that I ask you about it... isn't that inflaming the situation? Is that helpful, likening someone to the head of the KKK?"

"He has presided over and engaged in directly a series of racially insensitive remarks," Jeffries stated. "We cannot whitewash that, we cannot hide it. And on King Day, we should be able to have that candid discussion."