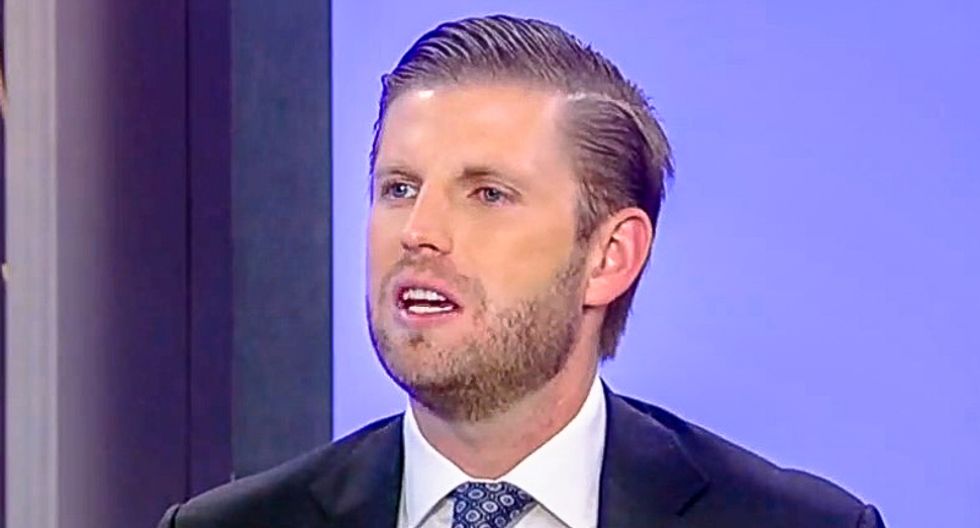 Eric Trump on Monday complained that NBC News had focused on the firing of undocumented workers at Trump National Golf Club after President Donald Trump shut down the government in a failed attempt to fund his border wall.

In a report published over the weekend, NBC said that at least 12 workers were fired from the Westchester County golf club. According to the workers, people at the "highest levels" of the golf club knew that they were living in the U.S. illegally.

The firings came as President Trump shut down the government in hopes of forcing Democrats to fund a border wall. The gambit proved to be a failure in the short term.

According to Eric Trump, NBC should not have covered the firings in its evening newscast on Sunday, calling the decision "truly heartbreaking."

"To think that a dam broke in Brazil (with 37 fatalities & many missing), Venezuela is in shambles, and so much more, yet @NBCNews leads with another anti-Trump story (that among 10,000+ hospitality employees, a few admitted to giving fake IDs to gain unlawful employment)," he wrote on Twitter.

"[It] just shows how pathetic the #MSM has gotten," he added. "I must say, for me personally, this whole thing is truly heartbreaking. It demonstrates our immigration system is severely broken and needs to be fixed immediately. Congress, stop going to Hawaii on vacation and do your damn job!"

Absolutely Kate - this why we need our incompetent “lawmakers” to fix this broken (and very sad) system. #FixThis https://t.co/ybcObDHmFW
— Eric Trump (@Eric Trump)1548693789.0