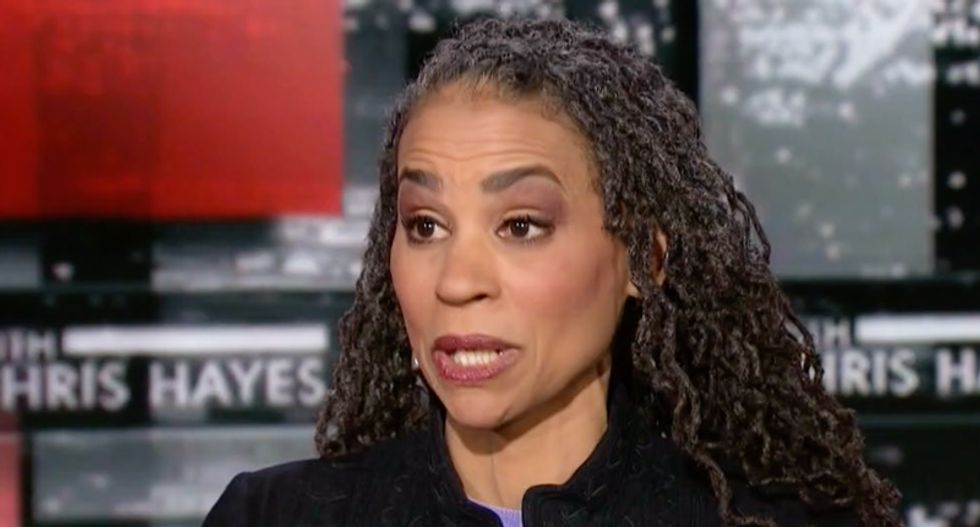 Wiley, the senior vice president for Social Justice at The New School, explained her theory on MSNBC's "All In" with Chris Hayes on Thursday.

"Three days after a stammering Attorney General indicated the special counsel's investigation was wrapping up, Robert Mueller's own court filings seem to be saying not so fast," Hayes noted.

The host detailed "three data points" on the state of the investigation.

"We know they're fighting about the subpoena with the secret company owned by the secret nation," Hayes noted. "They've told Andrew Miller, who is a Stone associate, you're not off the hook because we still need your testimony and the filing today."

"What does it add up to you?" Hayes asked.

"If you're the prosecutor only looking at perjury, witness tampering, obstruction, you don't have to make reference to contact with the Trump Organization -- with the Trump campaign," she explained. "So they're signaling something there, because it's not necessary for those indictments. It doesn't mean they're saying they're going to charge something but it's a signal."

"Remember, we have Rick Gates, whose sentencing was postponed because they were not done with him," she noted.

"That's another data point in the delay category," Hayes chimed-in.

"And remember that Roger Stone is connected, at least in relationship to [Paul] Manafort and Rick Gates -- particularly Manafort -- because of their forming a lobbying firm together," Wiley added.

"What this does tell me, is I would expect we may see superseding indictments when it comes to Roger Stone," she predicted.

Makayla Cox, a high school student in the US state of Virginia, thought she was taking medication that her friend had procured to treat pain and anxiety.

Instead, the pill she took two weeks after her sixteenth birthday was fentanyl, a synthetic opioid 50 times more potent than heroin. It killed her almost instantly.

Karen Brooks Harper, The Texas Tribune
A Texas jury has awarded a nearly $50 million judgment in a defamation trial against extremist talk show host Alex Jones for claiming the 2012 Sandy Hook Elementary School shooting was a hoax. He was sued by the parents of a 6-year-old boy killed in the tragedy.

The question is, will Texas law spare the Infowars host and his company Free Speech Systems tens of millions under a 19-year-old statute limiting the amount that a jury can make a plaintiff pay?

The answer is likely to be decided during the appeals process, but if the statutory limit is applied by the courts to Jones’ case, he could be forced to pay less than $5 million in total damages, legal experts say.

His persona could ricochet from sweetly paternal to icy menace whenever Rev. Rony Denis suspected disloyalty. Former followers said Denis reminded the disenchanted that his father was once a leader of Haiti’s vicious Tonton Macoutes — the legendary death squad named for a Haitian fairytale boogeyman who kidnaps and devours rebellious children. Denis warned malcontents that he learned from his dad how to destroy traitors, even those trained by the U.S. military.

Denis is the leader of the House of Prayer Christian Church, a nationwide network of 12 congregations, 11 of which are located near military bases where HOPCC recruited members. Founded in 2003, former members are now accusing HOPCC of being a cult. In June, the FBI raided at least four HOPCC churches in Texas, Georgia and Washington—all near military bases---seizing computers, files and records.