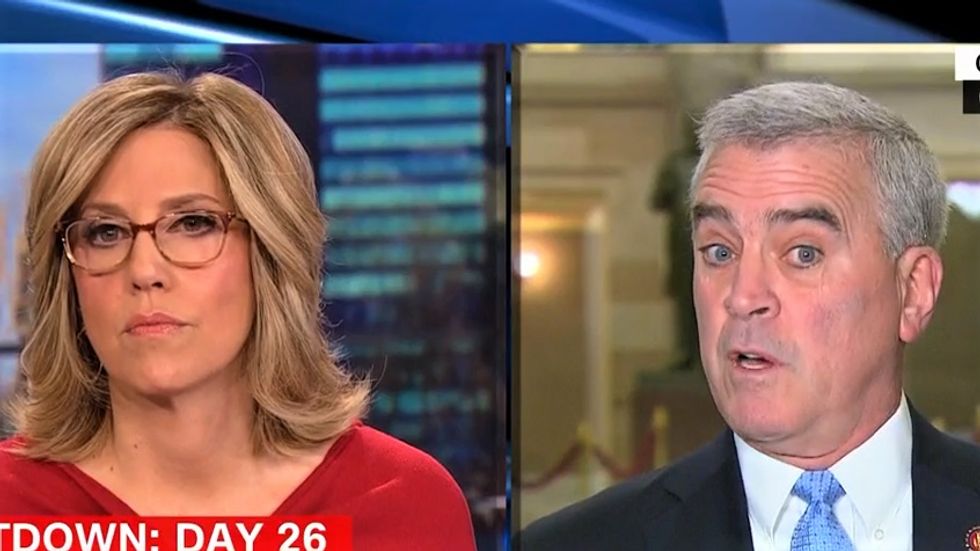 Rep. Brad Wenstrup (R-OH) on Wednesday tried to claim that a wall along the U.S.-Mexico border was needed to stop drugs and "diseases" from entering his community -- but he quickly crumpled after being fact checked by CNN host Alisyn Camerota.

During his interview, Wenstrup insisted that the proposed border wall was not a partisan issue and was just about "trying to find what's actually going to work best to keep Americans safe and secure" and to "stop the flow of any diseases coming into our country," as well as illegal drugs.

Camerota, however, quickly called him out for lying.

"Diseases are not pouring into the country," she said. "And one more thing about what you keep saying about drugs: As you know, the DEA says that the heroin that is coming into our country comes through legal ports of entry through private passenger cars and through tractor trailers. A wall won't solve that!"

Wenstrup totally dodged Camerota's point about the wall not being able to stop drugs and instead said he would "invite people to come to my district, ground zero for the heroin problem in our country, and talk to the addicts... talk to the family who have lost someone."

Camerota countered by telling him that "drug addicts and their families in your district will be sorely disappointed when you build 234 miles in the wall and the drug problem is not solved."

A sandstorm engulfed Saudi Arabia's capital and other regions of the desert kingdom Tuesday, hampering visibility and slowing road traffic.

A thick grey haze made iconic Riyadh buildings such as Kingdom Centre nearly impossible to see from more than a few hundred metres (yards) away, though there were no announced flight delays or cancellations.