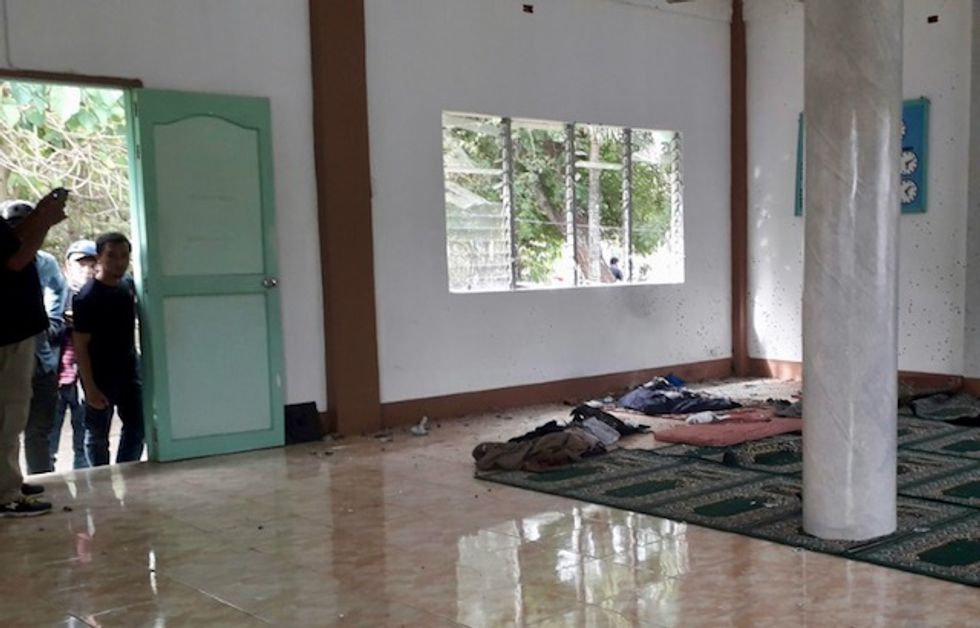 A grenade attack on a mosque in the troubled southern Philippines killed two people early Wednesday, authorities said, just days after a deadly Catholic cathedral bombing and a vote backing Muslim self-rule in the region.

The latest blast prompted worries of sectarian retaliation in the majority Catholic Philippines, but authorities urged unity across faiths as investigators hunted a motive.

The grenade explosion tore through the mosque as the victims were sleeping in the predawn darkness on the insurgency-plagued island of Mindanao, which is home to the Philippines' Muslim minority.

Four people were wounded in the attack.

Just three days earlier, a bombing at a cathedral on the neighboring island of Jolo claimed 21 lives at Sunday mass in an assault claimed by the Islamic State.

Authorities warned against speculating the mosque attack was an act of revenge, adding they had no indication it was retaliation for the cathedral bombing.

"We're still looking at it, but we have not found any connection," Defense Secretary Delfin Lorenzana told reporters. "In the past when churches were bombed ... there were no revenge attacks."

Authorities have not publicly identified any suspects and no one has claimed responsibility for the mosque attack.

"Regardless of one's faith (we) must resist becoming a victim of this vicious cycle of violence these terrorists are now attempting to create," Zia Alonto Adiong, a politician in the Philippines south, wrote on Twitter.

"Let us not fall into their trap and give them the satisfaction of turning ourselves (Muslims & Christians) into enemies."

Authorities are also hunting for those behind the cathedral assault, which security forces initially said was not a suicide bombing.

On Tuesday, however, President Rodrigo Duterte contradicted them, saying one of the bombers had blown himself up outside the cathedral.

Lorenzana appeared to walk back the president's comments on Wednesday, saying: "The final conclusion is not there yet. It's still being investigated."

The probe was zeroing in a group tied to the notorious Islamist kidnap-for-ransom group Abu Sayyaf, which has pledged allegiance to the Islamic State.

Police said they tried to arrest one of the suspects on Tuesday, but he got away and an armed man was shot dead by officers in the process.

The attacks have cast a shadow over hopes that a vote to give Muslims in the south more control over their own affairs would help quell long-running separatist violence.

Rebels and the government in Manila have expressed hope the new so-called Bangsamoro area will finally draw the investment needed to pull the region out of the brutal poverty that makes it a hotspot for recruiting radicals.

However, hardline factions aligned with IS were not part of the decades-long peace process with the nation's largest separatist group, the Moro Islamic Liberation Front, that culminated January 21 with the resounding approval of a new Muslim led-region in the south.

Jolo, which is home to hardline Islamist factions, is the only area in the southern Philippines that voted against the Bangsamoro.

The grenade attack on Wednesday drew immediate condemnation from authorities.

"There is no redeeming such blasphemous murder. It is the highest form of cowardice and obscenity to attack people who at prayer," said regional leader Mujiv Hataman.

"We call on people of all faiths ... to come together to pray for peace."