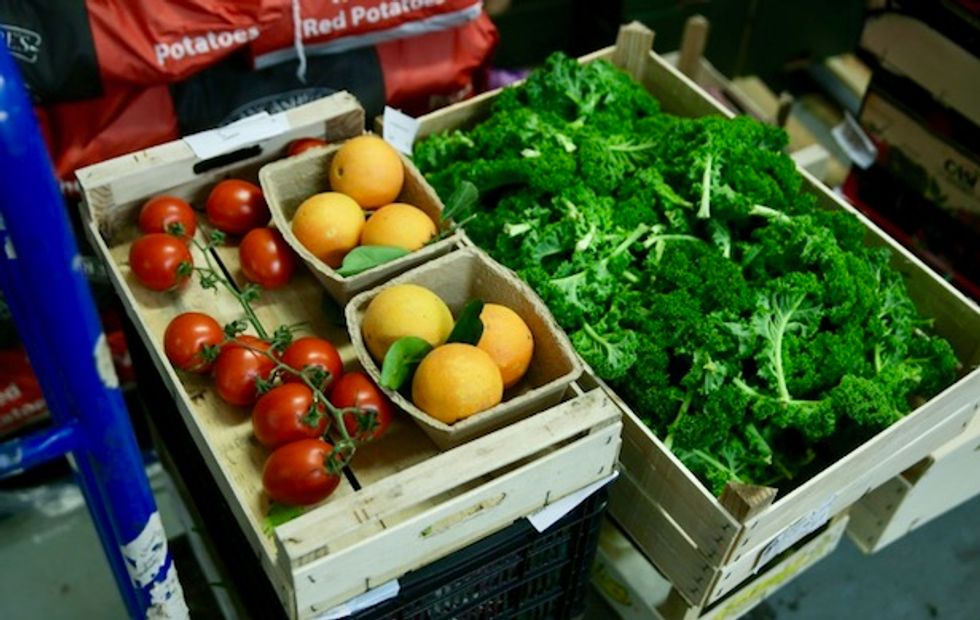 The landmark health study in The Lancet calls on people to double their consumption of vegetables, fruits and nuts AFP/File / Daniel LEAL-OLIVAS

The way humanity produces and eats food must radically change to avoid millions of deaths and "catastrophic" damage to the planet, according to a landmark study published Thursday.

The key to both goals is a dramatic shift in the global diet -- roughly half as much sugar and red meat, and twice as many vegetables, fruits and nuts, a consortium of three dozen researchers concluded in The Lancet, a medical journal.

"We are in a catastrophic situation," co-author Tim Lang, a professor at the University of London and policy lead for the EAT-Lancet Commission that compiled the 50-page study, told AFP.

Currently, nearly a billion people are hungry and another two billion are eating too much of the wrong foods, causing epidemics of obesity, heart disease and diabetes.

Unhealthy diets account for up to 11 million avoidable premature deaths every year, according to the most recent Global Disease Burden report.

AFP/File / YASUYOSHI CHIBA Not only do cattle pass massive quantities of planet-warming methane, but huge swathes of carbon-absorbing forests –- mostly in Brazil -– are cut down every year to make room for them

At the same time the global food system is the single largest emitter of greenhouse gases, the biggest driver of biodiversity loss, and the main cause of deadly algae blooms along coasts and inland waterways.

Agriculture -- which has transformed nearly half the planet's land surface -- also uses up about 70 percent of the global fresh water supply.

"To have any chance of feeding 10 billion people in 2050 within planetary boundaries" -- the limits on Earth's capacity to absorb human activity -- "we must adopt a healthy diet, slash food waste, and invest in technologies that reduce environmental impacts," said co-author Johan Rockstrom, director of the Potsdam Institute for Climate Change Impact Research.

AFP/File / Robyn Beck Beef alternatives like the Impossible Burger 2.0, a plant-based vegan burger that tastes like real beef, are one answer to decreasing the consumption of animal products

"It is doable but it will take nothing less than global agricultural revolution," he told AFP.

The cornerstone of "the great food transformation" called for in the study is a template human diet of about 2500 calories per day.

"We are not saying everyone has to eat in the same way," Lang said by phone. "But broadly -- especially in the rich world -- it means a reduction of meat and dairy, and a major increase in plant consumption."

The diet allows for about seven grammes (a quarter of an ounce) of red meat per day, and up to 14. A typical hamburger patty, by comparison, is 125 to 150 grammes.

For most rich nations, and many emerging ones such as China and Brazil, this would represent a drastic five-to-ten-fold reduction.

Beef is the main culprit.

Not only do cattle pass massive quantities of planet-warming methane, huge swathes of carbon-absorbing forests –- mostly in Brazil -– are cut down every year to make room for them.

"For climate, we know that coal is the low-hanging fruit, the dirtiest of fossil fuels," said Rockstrom. "On the food side, the equivalent is grain-fed beef."

It takes at least five kilos of grain to produce a kilo of meat.

And once that steak or lamb chop hits the plate, about 30 percent will wind up in the garbage bin.

Dairy is also limited to about one cup (250 grammes) of whole milk -- or its equivalent in cheese or yoghurt -- per day, and only one or two eggs per week.

AFP/File / JUAN MABROMATA A humble lentil stew - here being served for the homeless in Buenos Aires, Argentina - is rich in iron and protein, and a nutritious alternative to meat

At the same time, the diet calls for a more than 100 percent increase in legumes such as peas and lentils, along with vegetables, fruits and nuts.

Grains are considered to be less healthy sources of nutrients.

"We can no longer feed our population a healthy diet while balancing planetary resources," said The Lancet editor-in-chief Richard Horton.

"For the first time in 200,000 years of human history, we are severely out of sync with the planet and Nature."

The report drew heavy fire from the livestock and dairy industry, and some experts.

"It goes to the extreme to create maximum attention, but we must be more responsible when making serious dietary recommendation," said Alexander Anton, secretary general of the European Dairy Association, noting that dairy products are "packed" with nutrients and vitamins.

Christopher Snowdon of the Institute of Economic Affairs in London said the report "reveals the full agenda of nanny-state campaigners."

AFP / Jonathan WALTER The diet to save the planet and yourself, according the Lancet medical journal

"We expected these attacks," said Lang. "But the same food companies pushing back against these findings realise that they may not have a future if they don't adapt", he said.

"The question is: does this come by crisis, or do we start planning for it now?"

Some multinationals responded positively, if cautiously, to the study.

"We need governments to help accelerate the change by aligning national dietary guidelines with healthy and sustainable requirements, and repurposing agricultural subsidies," the World Business Council for Sustainable Development said in a statement.