Kentucky teens' harassment of indigenous man 'qualified as the legal definition of assault': Attorney who observed incident to CNN 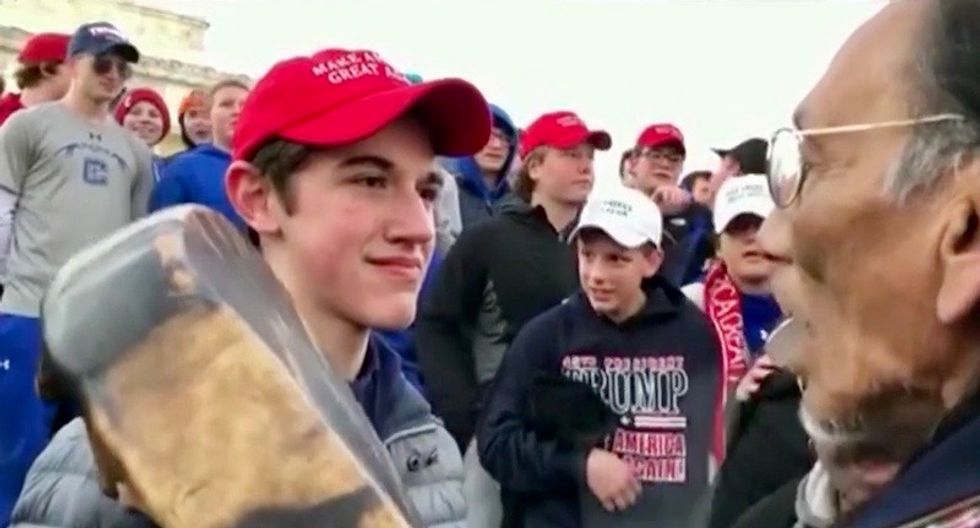 Elder Nathan Phillips is harassed and intimidated by a smirking Catholic school student in Washington, D.C./Screenshot

The Kentucky teens who dressed in MAGA garb and were filmed in a confrontation with an indigenous protester met the legal definition of assault, an attorney who observed the confrontation told CNN on Saturday.

The white Catholic students were originally harassed by group of black protests before Nathan Phillips, a Native American elder of the Omaha tribe who is a veteran of the Vietnam War, walked into the middle of the group. He said he was trying to diffuse the situation.

Attorney Chase Iron Eyes of the Lakota People's Law Project witnessed the entire event and told CNN's S.E. Cupp that the teens could face legal problems as a result of their actions.

"As an attorney, I felt that this qualified as the legal definition of assault," Iron Eyes said. "They were causing an apprehension, an objective fear of offensive contact or harm."

Iron Eyes said that the students were mimicking President Donald Trump's attitude and "expressing a lot of internal fear and angst" about "losing some of their privilege."

"They were very loud, very aggressive, very vocal, and they were disrupting—they were trying to drown out not only the group of African Americans but Nathan Phillips, Raymond Kingfisher, some of our elders who were closing out a beautiful day of the indigenous people's march," he said. "It's unfortunate that it had to end this way but it's emblematic of, I think, where we're at in terms of race relations in this country. We feel that President Trump is giving license to this behavior, in his rhetoric in his behavior. He sets the tone."