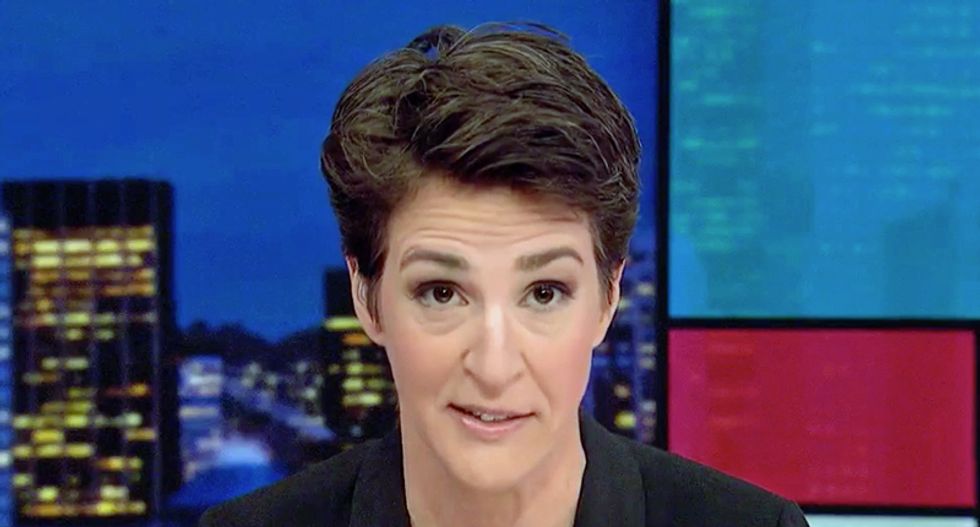 On day 30 of President Donald Trump's government shutdown, MSNBC anchor Rachel Maddow explained how the president's actions were threatening the ability of FBI agents to investigate the White House.

"If you ever wanted to put the FBI out of business, one cheap and cheerful way to do that is organize a federal government shutdown that went on, I don't know, for some really long period of time like more than 30 days," Maddow explained.

"One of the things that you endure regularly, if you work for an agency like the FBI is that they routinely do financial background checks on you," she noted. "A big part of the way they assess you in terms of whether some adversary or crook might be able to leverage something against you, part of the way they check that, is to check your finances."

"If you're going to have access to sensitive national security or intelligence-related information, they want to make sure you're not going to be sub susceptible to bribery, literally selling your country for cash," she explained.

"If you are in financial dire straights, if you're in debt up to your eyeballs and have financial burdens of any kind that might cause you real stress, that's a big red flag," she continued. "So they stress test you financially before you can get a security clearance and if you are an FBI agent, looking at the outset of your career while employed as an agent at the FBI, they will go back and frequently recheck that aspect of your life to make sure your financial situation has not changed to open you up to that pressure or leverage."

"Given that reality, one easy peasy way to screw up the whole FBI, not even just the FBI, everybody involved in law enforcement and national security, intelligence work, if you want to take a part in the U.S. government, it's easy, just start taking away paychecks from all of those people all at once," Maddow noted. "Not just one paycheck, it would really help if it was multiple paychecks -- let them go multiple pay periods with zero income while still requiring them to work every day."

"With that one genius move, you can break the family finances of basically every single federal law enforcement and national security agent in the country," she concluded. "And even better than that, in one foul swoop with just this one neat trick, you screw up all of their careers. you can create security clearance problems for all of them -- all at once -- by putting them all under financial strain."