Man versus condor: the king of the Andes under threat 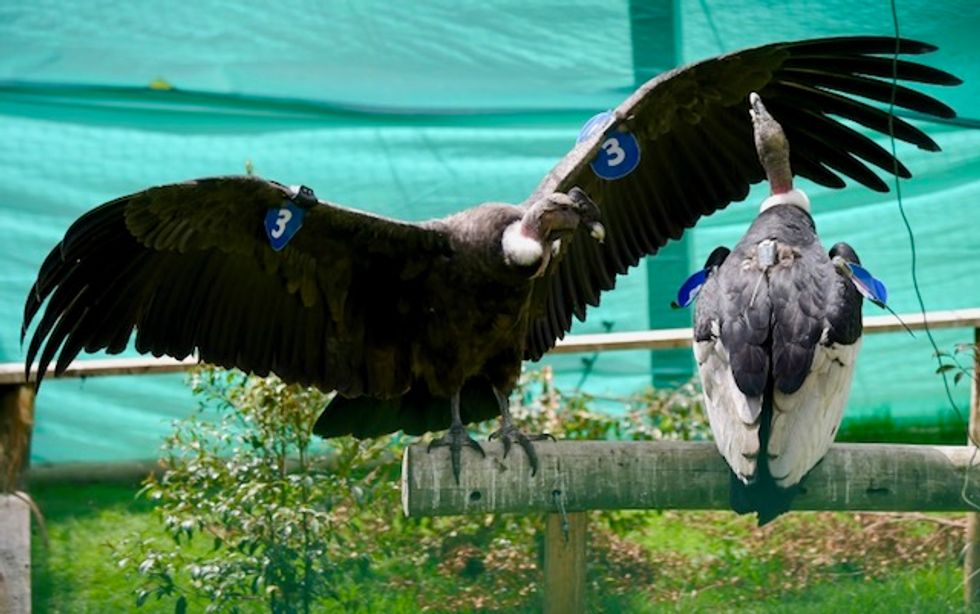 By all accounts, Dasan and Illika should have died of poisoning.

But they are back on their feet, poking their beaks through the bars of their cages, impatient to return to the skies over Colombia, which have been transformed into hostile territory for the so-called king of the Andes -- the condor.

Then Illika, an older female, was found just 200 meters (650 feet) from that spot, showing the same symptoms of poisoning -- which may have been intentional.

According to the Neotropical Foundation, the incident marks at least the fifth time that ranchers have used poisoned carrion to eliminate the birds of prey, which they see as dangerous to their herds of cattle, sheep and goats.

AFP / Raul ARBOLEDA A view of Cerrito, in Colombia, where the wounded Andean condors were found

In the Andes, the paramo ecosystem -- at an altitude of about 4,000 meters -- is a tropical mountainous area with hardy vegetation, prone to retaining moisture and resisting temperature changes.

It is not conducive to serving as a grazing pasture for livestock. But with development and the gradual disappearance of native wildlife, the Andean condor's habitat has been forever changed.

AFP / Raul ARBOLEDA Sheep are herded in Cerrito by Eduin and Gilberto Conde -- they are fans of the condor, but some farmers and ranchers say the birds of prey are dangerous to their livestock

"In Andean nations, the paramos serve as our reservoirs. Without this tropical heathland, we would literally be parched and dead," Sebastian Kohn, director of the Andean Condor Foundation in Ecuador, told AFP.

"The livestock is having a negative impact, but if we pull them all out in one fell swoop, the condor will have nothing to feed itself," he added, highlighting the complexity of the problem.

The Andean condor, one of the biggest birds in the world with a wingspan of up to 3.2 meters and a weight of 9-15 kilograms (20-33 pounds), is considered to be in critical danger of extinction in Colombia, a nation that has adopted the predator as its national symbol.

But the bird is not at risk on a global scale, even if its numbers are dwindling, according to the International Union for Conservation of Nature (IUCN).

Experts say there are only about 150 Andean condors left in all of Colombia, where there is no official count of the birds.

Condors typically only feed on dead animals, but it appears that some have taken to attacking live prey, according to residents of Cerrito.

"If the condors see an animal move, they hit it with their wings, two or three times. When they see it's no longer moving, they start eating it," explained Eduin Conde, a 38-year-old sheep farmer.

In all, 80 percent of Cerrito's total surface area is made up of wet heathland. Many rivers begin there, including the Arauca, which provides part of Venezuela with its water.

AFP / Raul ARBOLEDA Dasan and Illika, the sick condors, were cared for for months before being released back into the wild, with new tags for tracking and monitoring

At least 30 condors soar over the Cerrito area, according to Fausto Saenz, scientific director for the Neotropical Foundation.

The foundation worked with the Andean Condor Foundation in Ecuador, the US non-governmental organization The Peregrine Fund and the Jaime Duque zoo outside Bogota to rehabilitate and release Dasan and Illika back into the wild.

Researchers, firefighters and police officers took care of the birds at first. Then a helicopter airlifted them to the veterinary clinic at the Jaime Duque zoo.

"They were not reacting to any stimuli," recalls Saenz. The two birds also had the exact same symptoms -- an indication that "they had both eaten from the same poisoned source."

Cerrito's mayor, Carlos Romero, told AFP that an investigation was ongoing to determine whether the birds were intentionally poisoned.

Dasan and Illika remained in isolation for two months, with only minimal human contact and regular tests to monitor the toxicity in their systems. Slowly, they regained their strength.

During their convalescence, a contest was launched on social media to choose their names.

AFP / Raul ARBOLEDA In the Andes, the paramo ecosystem -- at an altitude of about 4,000 meters (13,120 feet) -- is a tropical mountainous area with hardy vegetation, prone to retaining moisture and resisting temperature changes

"Dasan means 'head of the birds,' while Illika means 'lucky one' in the Uwa dialect," Saenz said, referring to an indigenous group native to northeastern Colombia.

Poisoning is the top threat to condors in Colombia. The species is present throughout the Andes, from Venezuela to Argentina and Chile. Experts say there are about 6,700 left in the wild.

But the bird, which only lays an egg every two years, also faces risks from hunting and electrocution on power cables.

Andean bears and jaguars, whose natural habitats have been encroached upon by the expansion of farming and ranching, encounter the same risks.

About 100 people showed up at the spot where Dasan and Illika were found ill to watch the two majestic birds return to the wild.

AFP / Raul ARBOLEDA Environmentalists carry the two injured Andean condors to the spot in Cerrito where they were found, to be released back into the wild

They took flight before their admirers -- with newly fitted tags so they can be tracked and monitored for research purposes.

Eduin Conde and his family were among those who defended the birds, which they say are useful for clearing the area of carrion -- and thereby removing possible sources of infection for their herds.

Gilberto, Eduin's brother, is lobbying other locals against buying into stereotypical misconceptions about the king of the Andes.

"I tell them that we must protect the condor... as it's an emblematic, sublime bird that is on the road to extinction," he said, watching the skies with his binoculars.

Behind him, a fresco adorns the wall of the hotel that he runs in the mountains at an altitude of more than 3,000 meters.

It depicts a condor and bears the message: "The paramo lives on" -- a warm welcome to those courageous enough to climb this far.