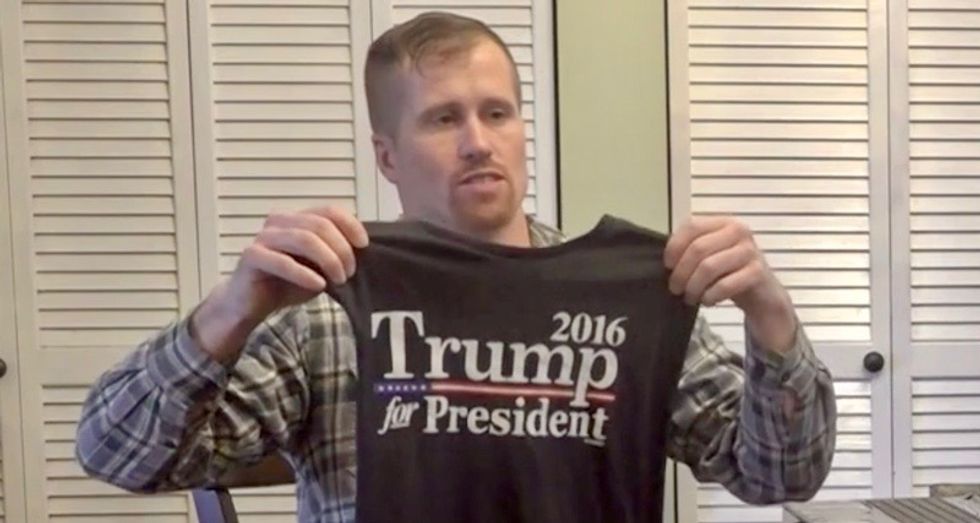 A Missouri man took to social media to whine after he was asked not wear his Trump 2016 campaign shirt to a local gym.

Jake Talbot was working out at a 24-hour gym in Troy, Missouri, outside St. Louis when the owner asked him to please not wear his Trump shirt to the gym again because it made other customers uncomfortable.

Talbot was told that other customers felt the shirt was racist.

“I hate that word whenever people use it," Talbot says he told the gym owner. "It’s thrown around way too loosely. It’s 2019. Get the hell over it. It’s not racism.”

"That word gets thrown around way too much," he said. "I don't like it, I hear it all the time."

The gym owner says that she doesn't want her space to be a "political forum for anyone."

Talbot, however, said that everyone should support Trump, because he's president.

"Everybody needs to support him," Talbot said. "I'm tired of the split, the divide, in the whole country. We need to come together."

The owner of CDY Fitness says she makes no apologies and will stand by what she believes regardless of the blowback.

"I am deeply saddened by the amount of hate this event has garnered," she wrote. "I will personally and publicly continue to defend my stance for tolerance and against hate no matter the financial consequence."