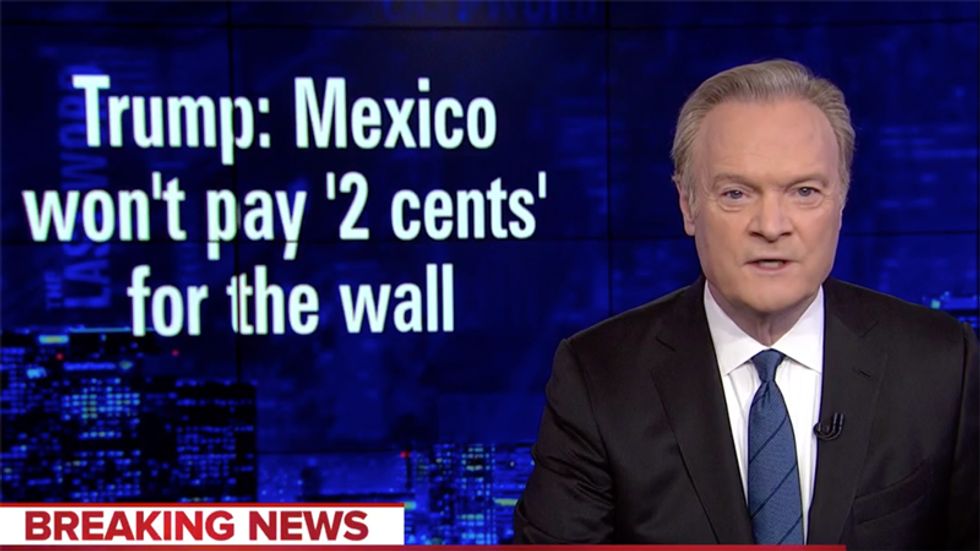 Lawrence O'Donnell is host of 'The Last Word' on MSNBC (screengrab)

President Donald Trump's admission that Mexico will not be paying for his wall marks a defining moment in the government shutdown -- and his presidency -- MSNBC's Lawrence O'Donnell explained on "The Last Word" on Thursday.

"On this date, January 10th, 2019, the big lie of the Trump presidency collapsed," O'Donnell reported. "And it collapsed in public."

"The big lie of the Trump presidency was in Donald Trump's presidential campaign announcement, three-and-a-half years ago," he noted.

The host played Trump's promise from his campaign kickoff, which went on to be chant at his rallies.

"I would build a great wall. And nobody builds walls better than me, believe me. And I build them very inexpensively," Trump promised. "I will build a great, great wall on our southern border and I will have Mexico pay for that wall -- mark my words."

At rally after rally during the 2016 campaign, the crowd chanted that "Mexico" would pay for his wall.

"And now Donald Trump himself is finally saying Mexico will not pay for the wall," he continued.

The host played a clip of the president at his photo-op along the southern border.

"Not even 2 cents," O'Donnell observed.