Nathan Phillips and the boys from Covington: What does this ugly encounter say about America? 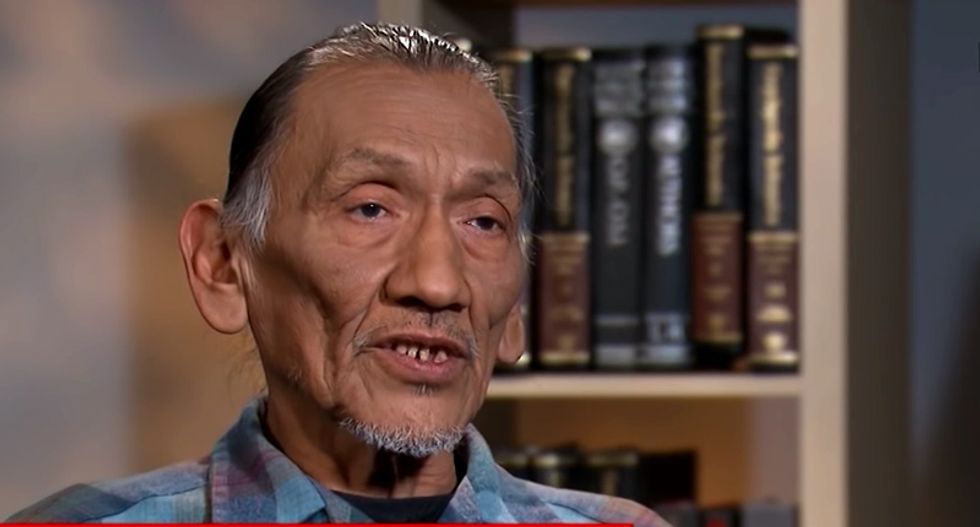 On Friday, in a widely viewed video, dozens of white teenagers in MAGA hats appear to surround, verbally harass and physically confront a Native American man named Nathan Phillips who was attending the Indigenous Peoples March at the Lincoln Memorial.

Phillips, a Vietnam veteran who served in the military for four years in the 1970s, told CNN that his confrontation with a group of boys from Covington Catholic High School in northern Kentucky felt like "hate unbridled." He continued, "What the young man was doing was blocking my escape. I wanted to leave. I was thinking, 'How do I get myself out of this? I want to get away from it."

There has been considerable back and forth over the last few days about this encounter, but the boys' behavior has been widely condemned as another example of the waysDonald Trump's presidency has encouraged racism in America. This disgust is good and necessary, but we cannot overlook the extent to which racism and white supremacy are foundational, centuries-old aspects of America's national character and political project.

Donald Trump is not "Patient Zero" for racism in America. But he is a plague carrier. On Monday, Trump proved this to be true again. On Twitter, he defended his devotees from Covington Catholic High School (while, true to form, misspelling the name of the young man seen confronting Phillips in the viral video).

Looking like Nick Sandman & Covington Catholic students were treated unfairly with early judgements proving out to be false - smeared by media. Not good, but making big comeback! “New footage shows that media was wrong about teen’s encounter with Native American.”

This is the same American president who has defended the neo-Nazis, Ku Klux Klan members and other white supremacists who killed Heather Heyer in Charlottesville as "very fine people" and routinely makes racist and other denigrating comments about Native Americans. He has repeatedly slurred Sen. Elizabeth Warren as "Pocahontas" and joked about the genocide of Native Americans with his recent references to the ignominious massacre at Wounded Knee.

A more important and more useful question remains: What does this racist mob action by pro-Trump youth reveal about American society?

Hate crimes and other forms of violence against nonwhites, Jews, Muslims, gays and lesbians and other marginalized groups have dramatically increased in the United States beginning with Donald Trump's presidential campaign and through the first two years of his presidency.

Political violence -- including physical assaults, murder and other hate crimes -- has repeatedly been committed by Donald Trump supporters wearing his trademark regalia or shouting his slogans.

Young white people are not significantly less racist than their parents or grandparents. Instead, many young white people have learned to alter their public behavior in order to appear more "tolerant" and "inclusive." In private, racist attitudes, beliefs and other behavior are still very common among white people.

Bullying and other types of antisocial behavior has increased in America's schools since Donald Trump's campaign and his election as president. New research demonstrates that this type of violent behavior (especially against nonwhites) is worse in areas of the country that largely voted for Trump.

The young people who accosted Nathan Phillips were in Washington to participate in a rally against women's reproductive freedom. White conservative Christians are among Donald Trump's most loyal and enthusiastic supporters. This group of Trump voters is also more likely to hold nativist and racist attitudes than other white Americans.

Donald Trump has harmed America's collective emotional and mental health. He has done this both through public policy and the way his leadership style and explicit directives have encourage violence and other harm by his followers directed groups they perceive as "other." A 2017 article in The New England Journal of Medicine demonstrates that Trump has actually created feelings of "psychological well-being, pride, and hope for the future" among his followers -- while doing the opposite among those he has targeted for harassment and suffering.

The teen MAGA mob is one example of how hypocrisy is a central pillar of racism. If a group of black, Hispanic or Muslim young people had accosted and physically threatened an elderly white Trump supporter the public reaction -- especially by white conservatives -- would be angry, panicked and hysterical.

When young white people act badly -- even when they commit heinous crimes like mass murder -- no one asks any of the following questions: Where are their parents? What values are they learning in their homes? What lessons and values being taught in their schools? Where and how are these young white people being radicalized? Is there a "cultural problem" in the white community? When will white leaders condemn this behavior?

White young people are also protected from the consequences of their behavior because of such absurdities as "affluenza" and the presumption that they are inherently "good kids" who "made a mistake" and deserve "the benefit of the doubt" and a "second chance."

This kind of white privilege often extends to white male adults as well. Brett Kavanaugh threw a juvenile, angry temper tantrum before the Senate Judiciary Committee during his Supreme Court confirmation hearing and was still confirmed.

Donald Trump routinely behaves like an adult baby yet remains extremely popular among his public and in all likelihood will not be impeached or otherwise punished for either his public or private violations of democratic norms, the Constitution and the law.

By comparison, black and brown young people and children are treated like adults by American society. The 10-year-child Tamir Rice, executed on the street by Cleveland police, is one example. Trayvon Martin, a 17-year-old unarmed boy, was killed by a street vigilante for the "crime" of walking home and not being sufficiently deferential to a stranger who was stalking. There are countless other examples we could list. Negrophobia and "adultification" are lethal for black children and young people in America.

Racism is an intergenerational legacy in White America. It is a taught and learned behavior. At least 4,000 black Americans were lynched in America following the Civil War through to the second half of the 20th century. Hundreds of black communities were destroyed by racial terrorism and pogroms in America during that same period. Thousands of black Americans were killed and injured by white mob actions and coordinated campaigns of ethnic cleansing. Young white people like the ones who tried to intimidate Nathan Phillips on Friday were taught hatred through that history.

In lynching photographs from 60 or 70 years ago, we can see images of smiling, mocking and smug young white people, not dissimilar from the images of the MAGA mob last Friday in Washington.

Honestly. I'm still scared. I'm still feeling vulnerable. But I'm not gonna back down. Those young people from that school, that song was a prayer for their future and my children’s future. We’re facing critical times and we’ve got to make choices, and they're going to be some hard choices....

I see a future though. I do see a future. I see a bright, beautiful future if we want it, if we're willing to pray for it, it's there for us. It's ours to pass on to the next generation, but we got to be willing for it.

Will the Trump-loving young people and other members of Trump's political cult internalize Nathan Phillips' wisdom? Most likely not.

Donald Trump has empowered and championed the worst in America. Too many of those lost souls will become dead-enders for the cause of Trumpism, convinced that their bad behavior and betrayal of American democracy are in fact a noble project.

Racism and white supremacy are America's native form of fascism, and that fascism has many adherents both young and old. Those ideologies and the people who believe in and practice them are not going away. The spiritual and cultural pathologies that plague this country will not be easily vanquished.