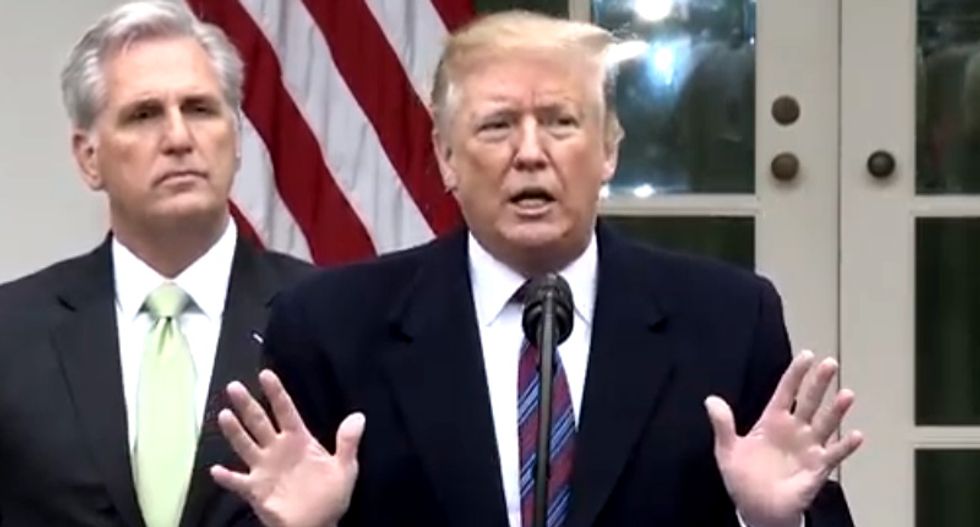 If President Donald Trump's shutdown of the federal government over Democrats refusal to provide funding for the border wall he promised voters that Mexico would pay for continues for another month there are a number of "nightmare scenarios" that could unfold, reports Bloomberg.

“Shutdowns don’t get bad linearly; they get bad exponentially,” Sam Berger, who worked in the Office of Management and Budget under President Barack Obama, told Bloomberg.

It could also tank the economy, experts warn, as "economists say the shutdown threatens to shake consumer confidence and chip away at retail sales, particularly as unpaid federal workers and contractors forgo spending on cars, new homes and even entertainment."

Another piece of fallout is the Department of Agriculture warning that there may not be enough money to give food stamps to 38 million recipients past February. One analyst estimates that this alone could mean the loss of 0.53 percent of the total GDP.

The TSA is concerned that its workers could leave during an extended shutdown given the strength of the job market and that it would be impossible to hire replacements given there was no way to pay them.

“Now is the time when people are going to start looking for other options,” said Steve Lenkart, who directs a union that represents 110,000 federal employees. “The rent is due, and a lot of these feds live paycheck to paycheck.”

Another thing that is sure to anger wealthy Republicans is that while the federal government is shuttered there can be no new initial public offerings on public stock exchanges.

With the Securities and Exchanges Commission closed companies like Uber aren't able to go public as they have long planned.