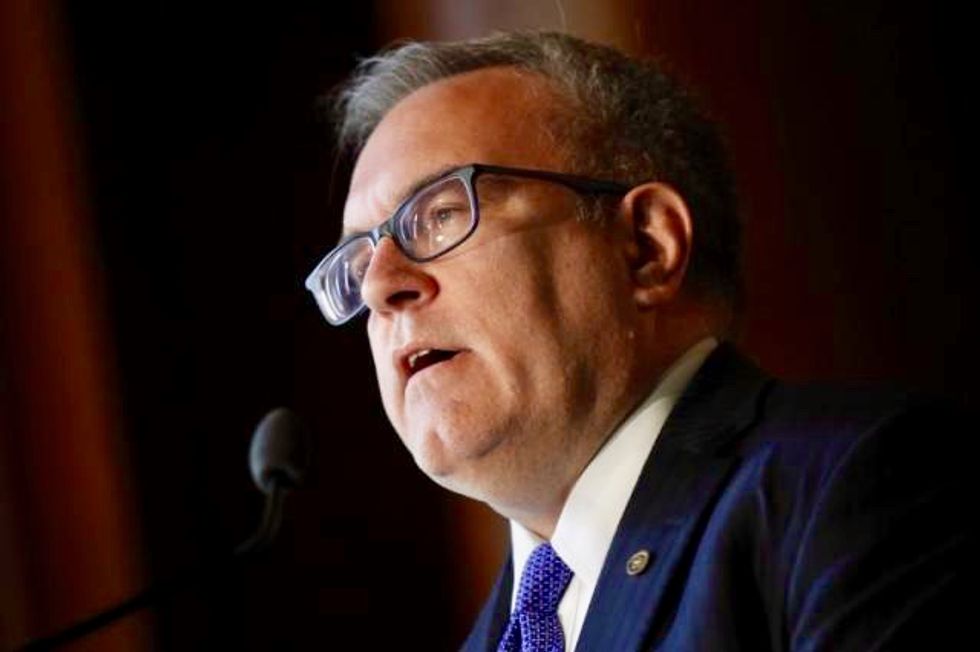 U.S. President Donald Trump’s new pick to run the Environmental Protection Agency told lawmakers on Wednesday he does not believe climate change is a major crisis, and would continue to undo Obama-era emission limits if confirmed.

“I would not call it the greatest crisis,” Wheeler said at his confirmation hearing when asked if he believed the increasingly urgent warnings from scientists about the threats from global warming.

Wheeler’s confirmation is expected to sail through the Republican-controlled Senate despite Democratic opposition. A Washington insider with years of experience, he has been running the EPA since July when his predecessor Scott Pruitt resigned in a flurry of criticism over his use of resources and staff for personal matters.

Democratic lawmakers focused on Wheeler’s record at EPA, his past lobbying work for energy companies, and his stance on global warming - casting him as a pro-business extremist not fit to run the nation’s top environmental regulator.

Democrat Senator Ed Markey of Massachusetts and Senator Bernie Sanders of Vermont, an independent who caucuses with Democrats, asked Wheeler his view of global warming, which scientists say is driven by fossil fuels consumption and is leading to sea level rise, and more frequent flooding, wildfires and extreme weather.

Wheeler said he believed global warming is an important issue that needs to be addressed, but that far-reaching federal regulation forcing deep emissions cuts was the wrong approach and more faith should be put in the hands of states and private enterprise.

“You are putting up a smokescreen to ensure there is an advancement of Donald Trump’s dirty policies,” Markey said, in one of the hearing’s most heated exchanges. “That’s why it is relevant that you are a former coal industry lobbyist.”

A federal report written by 13 government agencies late last year said climate change will cost the U.S. economy hundreds of billions of dollars by the end of the century, damaging everything from human health to infrastructure and agricultural production.

Trump, who has repeatedly cast doubt on climate change and has indicated his intention to withdraw from a global pact to fight it, dismissed the report after its release, saying “I don’t believe it”.

Wheeler said he had been briefed on the assessment, but was waiting for further briefings from his staff before taking a public position on its findings.

Wheeler defended his record at EPA, which has been largely defined by moves to undo or weaken Obama-era environmental regulations. He cast the agency’s rollbacks as a way to reduce the regulatory burden on business while also protecting air and water quality for Americans.

Among his accomplishments, Wheeler last year finalized a proposal to replace Obama-era federal curbs on carbon dioxide emissions from power plants with a new rule placing much of that power in the hands of states.

He has also overseen the EPA’s gutting of the justification for Obama-era mercury emissions limits, a proposal to reduce the number of waterways under federal protection, and efforts to lower targets for vehicle fuel efficiency.

Democrats pressed Wheeler on whether his EPA work was in any way linked to his previous lobbying on behalf of energy companies like underground coal giant Murray Energy, a vocal proponent of reduced environmental and safety regulation.

Senator Sheldon Whitehouse, a Rhode Island Democrat, held up photos of Wheeler attending meetings between Murray’s Chief Executive Robert Murray and Trump administration officials, and asked Wheeler for a full accounting of the number of such meetings he had arranged for the coal company.

Wheeler said he would provide a written response.

Industry representatives and Republican lawmakers have largely praised Wheeler for his deregulatory stance.

“He understands how the regulatory process works and the type of effort that is required to develop effective and legally defensible regulatory reforms,” said Jeff Holmstead, a partner at industry-focused law firm Bracewell and a former EPA air administrator.

Activists briefly interrupted Wheeler’s testimony on Wednesday shouting “Shut down Wheeler, not the EPA,” and several were arrested after demonstrating outside the hearing room.