Paul Ryan and Mitch McConnell tried to talk Trump out of shutdown standoff explaining there was 'no way to win': Report 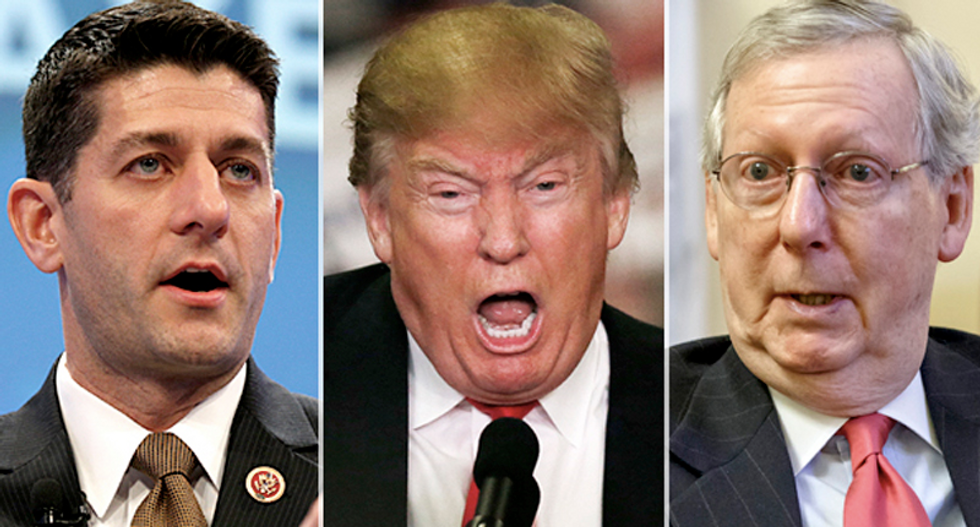 Senior Republicans tried to talk President Donald Trump out of his planned standoff over the border wall, the Washington Post reported in a deeply sourced article about the start of the shutdown published Saturday afternoon.

According to the report, Trump was "warned repeatedly about the dangers of a shutdown but still opted to proceed."

Among the GOP officials who tried to talk Trump out of the standoff were Senate Majority Leader Mitch McConnell (R-KY) and then-Speaker of the House Paul Ryan (R-WI).

McConnell "told the president that he had no leverage and that, without a clear strategy, he would be 'boxed in a canyon,'" the report says. McConnell pointed out that even if Rep. Nancy Pelosi (D-CA) wanted to make a deal with Trump her caucus would forcefully oppose it.

"Then-House Speaker Paul D. Ryan (R-Wis.) talked with Trump by phone for 45 minutes the day before the shutdown, warning that he saw no way to win as he paced in a Capitol hallway just outside a conference room where House Republicans were meeting. House Majority Leader Kevin McCarthy warned about the perils of a shutdown during the Christmas season," the report says.

Trump's own aides are “freaking out," the report says.

"Current and former aides said there is little strategy in the White House, and people are frustrated," the report reads.