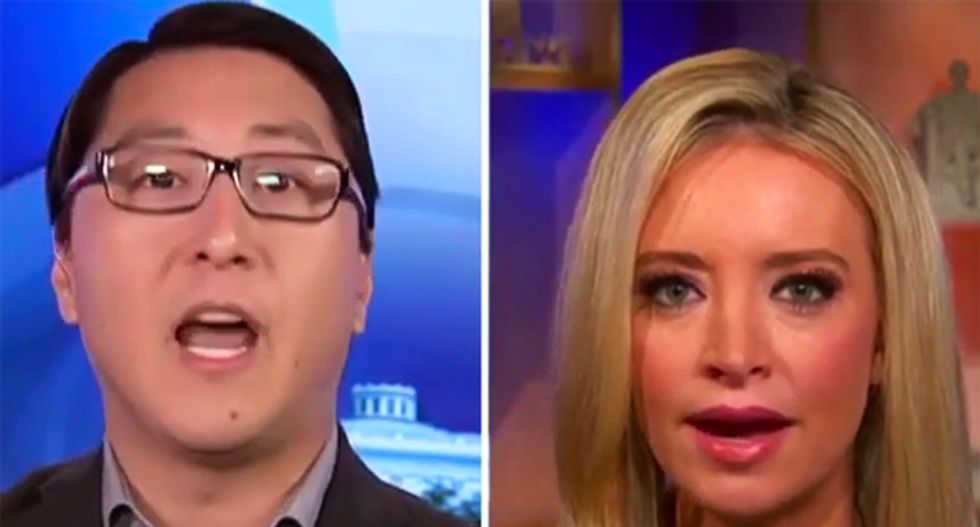 Republican National Committee spokesperson Kayleigh McEnany had a furious meltdown on Saturday afternoon while trying to use the death a police officer to push for Donald Trump's wall -- only to have a former Republican point out the thousands of Americans who die due to gun violence.

Appearing on MSNBC with host Alex Witt, McEnany frantically pointed to the death of Newman Police Department Cpl. Ronil Singh, who was shot to death by an undocumented immigrant the day after Christmas, as evidence for the need for a multi-billion dollar wall at the border.

Asserting that Trump is concerned about the border, McEnany stated, "It’s being concerned about the citizens of our country, all of them. When you have Officer Ron Singh, who lost his life to an individual with known gang ties who should not have been in this country -- we have to care about those victims."

Jumping into the fray, ex-Republican Kurt Bardella -- who worked for former GOP Rep. Darryl Issa (CA) -- brought up a major factor that led to his departure from the party.

"What about all the people who have been shot and murdered by white Americans in this country?" he asked. "Where is the concern for Homeland Security and for law enforcement when people are getting killed by guns every day? I don’t see Republicans doing anything about that."

"You're deflecting!" McEnany shouted over him as he continued to call her out.

"You’re proving my point, you don’t want to talk about the Americans who lost their lives," the RNC spokesperson ranted during the crosstalk.

Watch the fireworks below: