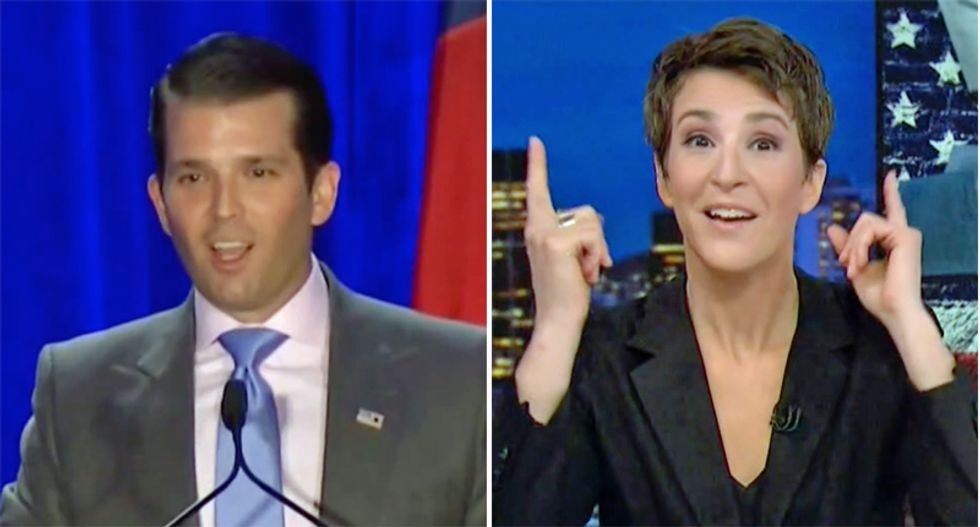 MSNBC anchor Rachel Maddow connected the dots to present a fascinating theory on one aspect of the ongoing special counsel investigations into President Donald Trump.

In her theory, both Donald Trump, Jr. and Republican congressional leadership may be directly implicated.

The host explained the six-month extension of the Grand Jury used to indict Roger Stone.

Maddow noted "under Justice Department rules, once a Grand Jury has indicted somebody, that Grand Jury is not allowed to keep collecting more evidence randomly about that person who they brought an indictment against. The Grand Jury serves a specific purpose."

"All Grand Juries do is indict people," she explained. "If the Grand Jury is still working on this, still taking more testimony on this after Roger Stone has already been indicted, if this is still a live case before that Grand Jury, that means they are still working on another potential indictment related to Roger Stone and Wikileaks and what Russia stole from the Democrats.

"And it could mean that it's just that Roger Stone will get indicted again -- there could be some superseding indictment coming for Roger Stone on top of the seven felony counts he's looking at," she noted. "It could be that."

"I feel like I would be remiss not to note that the one other person associated with the Trump campaign, besides Roger Stone, who admits to having months of communication with Wikileaks during the campaign ... the only other person other than Roger Stone we know of that had months of communications with Wikileaks is ... the president's eldest son and namesake, Donald Trump, Jr.," she reminded.

She played clips by Sen. Richard Blumenthal (D-CT) and Rep. Jackie Speier (D-CA) both publicly airing concerns on MSNBC that Trump, Jr. lied to their committees.

Speier sits on the House Intelligence Committee. While Republican leaders have appointed members to 23 other Congressional committees, they have not yet appointed their members to Intel, preventing the committee from meeting.