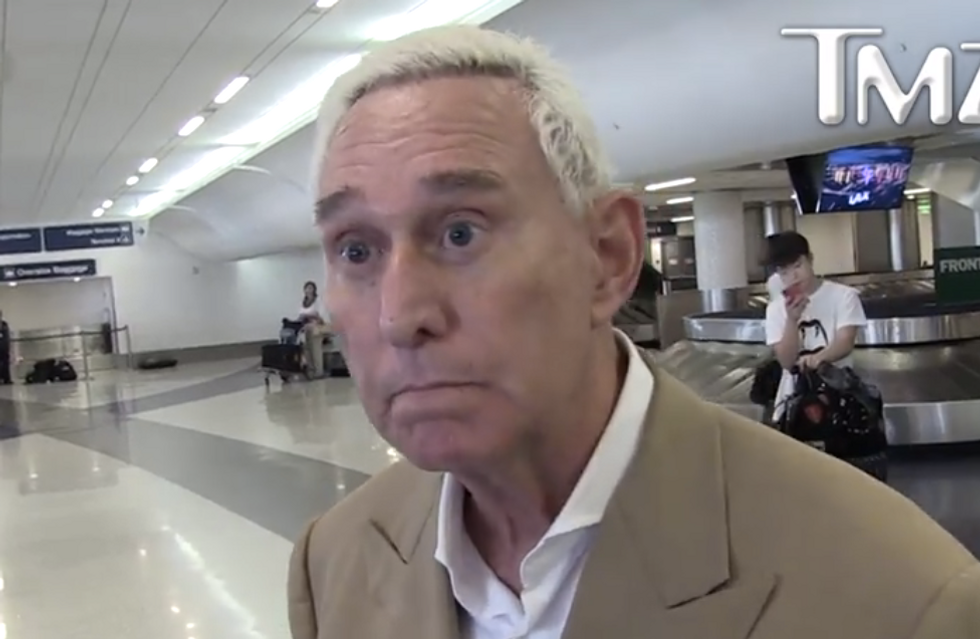 Roger Stone speaks to a reporter at LAX (Screen capture)

During a panel discussion led by CNN's Kate Bolduan, the host noted that Trump this week questioned whether the FBI went too far in its decision to conduct an early-morning raid on Stone's house last Friday.

Honig, however, said there was absolutely nothing to question about the FBI's tactics in this particular case.

"Roger Stone brought this on himself, period," he said bluntly. "Any time you need to arrest somebody... you have two options as a prosecutor and FBI. You can allow them the courtesy of surrendering at some future time and date, or you can do exactly what was done with Roger Stone. You knock on the door at 6 a.m."

He then went on to explain that Stone couldn't have reasonably expected better treatment given the allegations being leveled against him.

"Roger Stone is charged with very strong counts of obstruction, of witness tampering -- in the indictment we saw he told the witness, 'Prepare to die,' he threatened to kidnap a witness's dog!" he said. "When you do that kind of thing, you give away the right to that courtesy."

According to a report from USA Today, a PAC affiliated with Donald Trump's attempt to allege election fraud in the 2020 presidential election paid out $60,000 to the fashion consultant for former first lady Melania Trump.

The report from USA Today's Erin Mansfield explains that fashion consultant Hervé Pierre Braillard received four payments starting April 7 and ended on June 24 for what was described as "strategy consulting" with no further explanation as to that means.

Strategic ambiguity? The US, Taiwan and China -- a guide

Pelosi's pledge Friday that the United States will "not allow" China to isolate Taiwan comes just months after President Joe Biden repeatedly said US forces would defend the island militarily if China attempted to take control of it.

There’s a video going around of Jon Stewart confronting a highly influential right-wing propagandist with millions of followers inside and outside the GOP, including supporters of the former president.

I don’t need to tell you his name. I don’t need to explain the context in depth or why they found each other face-to-face or even why the former host of “The Daily Show” was blue face vein-popping angry.