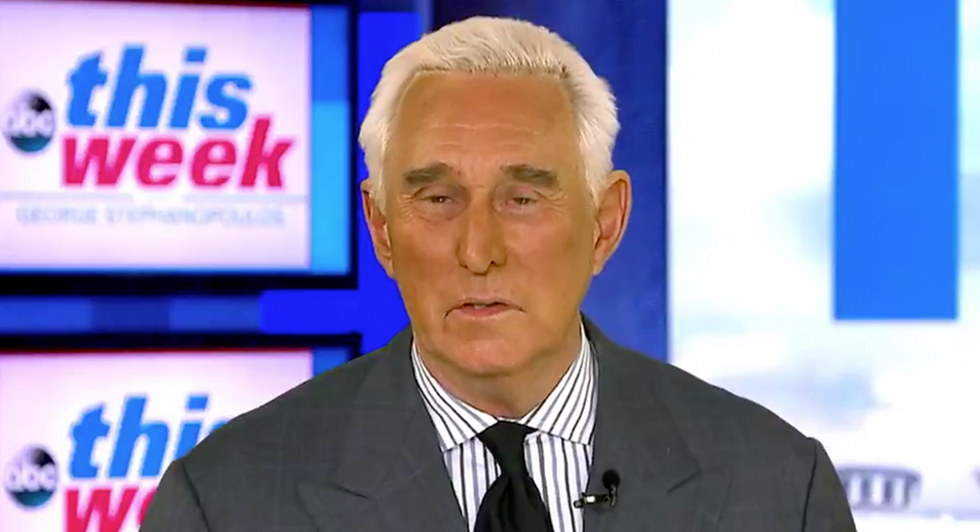 On today's episode of This Week with George Stephanopoulos, guest Roger Stone seemed to signal an interest in cooperating with the Special Counsel.

"You know, that’s a question I would have to –- I have to determine after my attorneys have some discussion," said Stone in response to host Stephanopoulos asking if he would cooperate with Robert Mueller.

"If there’s wrongdoing by other people in the campaign that I know about, which I know of none, but if there is, I would certainly testify honestly. I’d also testify honestly about any other matter, including any communications with the president. It’s true that we spoke on the phone, but those communications are political in nature, they’re benign, and there is –- there is certainly no conspiracy with Russia. The president’s right, there is no Russia collusion," he continued.

Stone has long painted himself as a "political trickster" for many years. He has been involved in the president campaigns of Richard Nixon, Ronald Reagan, Jack Kemp, Bob Dole and Donald Trump. He also co-founded the lobbying firm Black, Manafort, Stone along with Charles R. Black Jr. and Paul Manafort. The latter has also been indicted by Robert Mueller.

Stone also said that the President has "absolutely, positively not" offered him a pardon for any wrongdoing.

Donald Trump himself has attempted to distance himself from Stone, claiming he did not work for him during the election, and trying to change to focus to his then opponent, Hillary Clinton.

Stone’s answers on This Week seem to show that he may be open to cooperation with the Special Counsel, in spite of his defiant actions both before and after his arrest.

Stone was arrested in a pre-dawn FBI raid of his Florida home this Friday. He will be arraigned on Tuesday on seven counts -- one count of obstruction of an official proceeding, five counts of false statements, and one count of witness tampering -- in connection with the investigation into interference into the 2016 election.