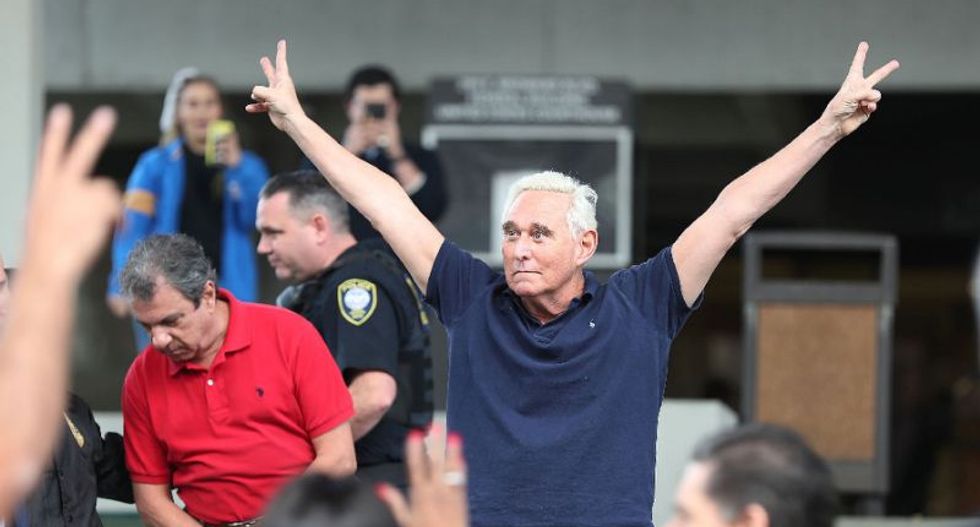 Roger Stone, pictured exiting a federal courthouse in Florida on January 25, 2019, is a renowned political dirty trickster who has consulted with Trump for four decades, (AFP Photo/JOE RAEDLE)

On Tuesday, Trump associate Roger Stone was arraigned in federal court. He entered a plea of not guilty.

Stone has maintained his innocence throughout Special Counsel Robert Mueller's probe into whether the Trump campaign colluded with Russia.

In fact, the website for his legal defense goes so far as to wonder "Who framed Roger Stone?" a reference to the movie "Who Framed Roger Rabbit?"

On the site, Stone claims to have been unjustly targeted by Mueller.

"Despite a lack of evidence of Russian Collusion, Wikileaks collaboration or any other illegal activity in the 2016 election, long time Trump advisor Roger Stone has been targeted by Special Counsel Robert Mueller," the website reads.

"Mueller seeks to criminalize normal political activities by Roger Stone while ignoring the blatantly illegal activities of the Clinton campaign and the Obama NSA,DOJ and FBI."

CNN justice correspondent Evan Pérez pointed out that Stone should probably be taking the charges a little more seriously, given the preponderance of evidence against him.

"If you go to Roger Stone's fundraising websites one question is, 'Who framed Roger Stone?" Pérez points out.

"Roger Stone framed Roger Stone because there are his text messages. There are his e-mails. The investigators have a lot of proof to back up these allegations, these seven counts that he is charged with,' Pérez said.

"At some point he will have to treat these extremely seriously," he added.

"His legal team certainly does. He has lawyers that came up from Florida that had a bit of a delay of getting waved in. They are treating this extremely seriously because there is a lot of evidence that is stacked up against him."

"While Roger I think you will hear when he comes out of court will try to minimize and try to create a circus atmosphere around this, I think this judge, she will treat this extremely seriously."