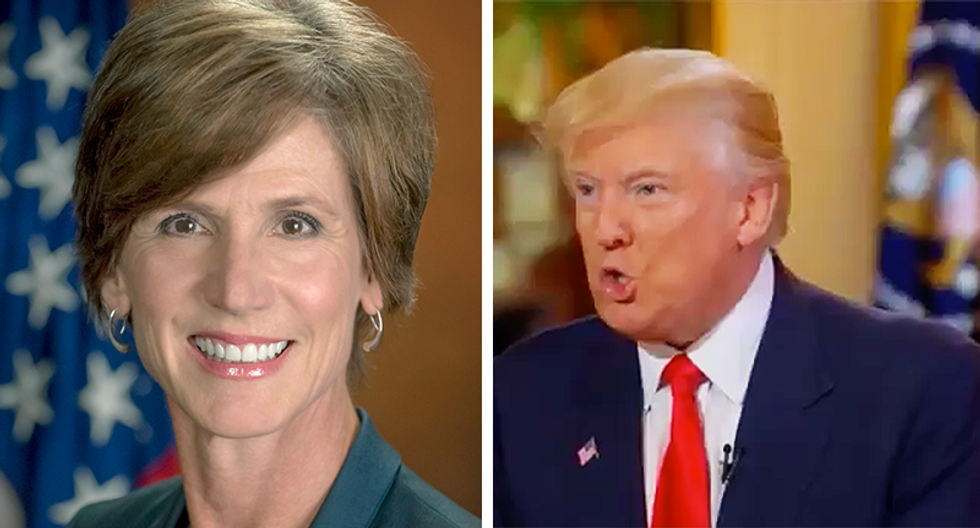 The day before President Donald Trump fired FBI director James Comey to allegedly relieve pressure on himself over the investigation into Russia's meddling in the 2016 election, acting Attorney General Sally Yates testified to Congress about the activities of Trump's national security adviser, Michael Flynn.

As Yates explained, she was concerned that Russia knowing about Flynn's lies allowed him to be easily blackmailed.

"We weren’t the only ones that knew all of this... the Russians also knew about what General Flynn had done," she said. "And that created a compromise situation, a situation where the national security adviser essentially could be blackmailed by the Russians."

As national security analyst Marcy Wheeler explains in a new post, at the time Yates knew that Flynn had lied about Russian sanctions. But what Yates did not know was that Trump himself may have ordered Flynn to get rid of the sanctions, as many believe happened based on conversations between Flynn, Trump and Flynn's aide KT McFarland, who was stationed at Mar-a-Lago with the president.

"Neither Yates nor the FBI would have known that the Russians were offering a Trump Tower deal and dirt on Hillary Clinton to induce Don Jr to commit to revisit sanctions," Wheeler writes.

Yates believed Flynn was compromised and sounded a warning bell, Wheeler writes, but based on what we now already know, Trump may have been "more susceptible to blackmail than Flynn, because Flynn had just been doing what he was told, didn’t have a prior bribe to hide, and might expect a pardon if he successfully protected the President."

Based on what we've learned since, it appears Yates' testimony foreshadowed Trump's increasingly unhinged actions.

"Trump would be stuck committing one after another act of obstruction in an attempt to prevent the FBI from discovering the full truth," she writes. "Each of those acts would put him deeper in the hole, because each time he engaged in obstruction, the Russians would measure his increasing vulnerability."

A Friday filing with the Federal Election Commission shows that Sidney Powell, the Texas lawyer and conspiracy theorist so extreme that Donald Trump's campaign fired her, has launched a new super PAC which will allow her to raise an unlimited amount of money and put it towards virtually any political cause — including paying herself. The PAC, called "Restore the Republic," lists its physical address as a UPS dropbox about half an hour from the former president's residence Mar-a-Lago.

Powell rode her ludicrous allegations about election fraud to international notoriety in November, joining the Trump campaign's "elite strike force" alongside former LifeLock spokesperson Rudy Giuliani and legal adviser Jenna Ellis. Her off-the-wall performance at a now-infamous Nov. 19 press conference, where she declared, among other things, that voting machines across the country had been rigged on behalf of former Venezuelan president Hugo Chávez (who died in 2013), drew so much backlash that the Trump campaign cut her loose. Powell was back in the White House weeks later, however, with Trump floating her as a possible special counsel tasked with investigating his election defeat.

Trump impeachment article to be sent to Senate, triggering trial