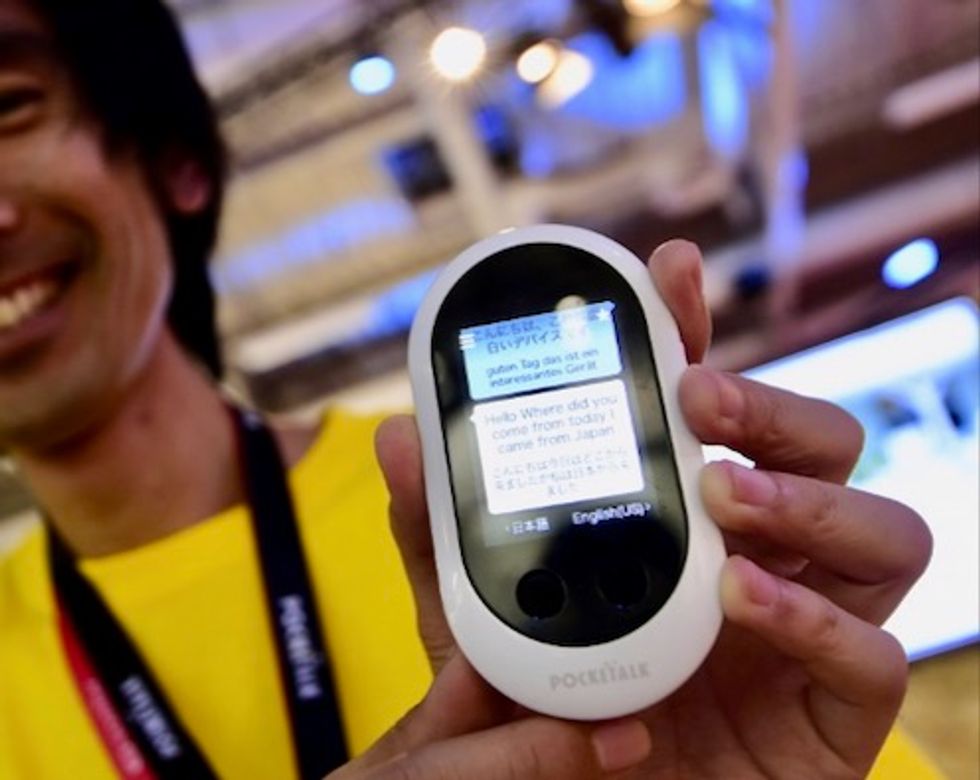 Pocketalk, which appeared reminiscent of an early-generation mobile phone, could translate 74 languages and was priced at $299 AFP/File / Tobias SCHWARZ

Once confined to the realms of science fiction, near real-time translation devices that whisper discretely into your ear during a conversation are finally coming of age thanks to leaps in AI and cloud computing.

An array of companies at the Consumer Electronics Show are promoting increasingly sophisticated devices that allow people speaking different languages to converse with the help of handheld devices or wireless earpieces.

Waverly Lab's "Pilot" headphones translate 15 languages and are priced from $180 and $250.

If each person in a conversation is wearing a Pilot, they can speak directly to one another using their own language.

During a brief demonstration in Las Vegas, an AFP journalist speaking French was ably translated into the ears of English-speaking Andrew Ochoa, boss of Waverly Labs.

The company was founded in 2014 in New York. Translation work was routed to the cloud by Ochoa's smartphone, where an application can also create a written transcription of a conversation.

Computer power in online data centers interpret what is said, and send the appropriate translations to listeners taking part in conversations, Ochoa explained.

As a result, there could be lag of a few seconds to allow for interpretations.

Universal translators have long been a fixture of science fiction, from shows like "Star Trek" to the babel fish that sits inside the ear canal and feeds off brain wave energy in "The Hitchhiker's Guide to the Galaxy."

But they have only recently become viable in the real world thanks to the increasing power and speed of mobile devices, machine learning, and wireless connections.

"We apply some features of AI, such as machine learning and neural network, to translation models," Ochoa said.

"Those technologies have matured enough to make this possible."

Software neural networks can be trained to understand phrases even if words are new to them, eliminating the need to feed entire dictionaries into systems.

Some 35,000 pairs of Pilot headphones have sold in less than a year, with customers including businesses such as hotels with keen need to engage customers speaking various languages, according to Ochoa.

China-based TimeKettle was at CES with WT2 earbuds that worked in a way similar to Pilot.

A Pocketalk device being shown off here by Japanese firm Sourcenext took smartphones out of the translation equation and hoped to be a hit during the Tokyo Olympics in 2020.

"We realized that, thinking about the 2020 Olympics, many Japanese only speak Japanese," said Sourcenext spokesman Richard Gallagher.

Pocketalk, which appeared reminiscent of an early-generation mobile phone, could translate 74 languages and was priced at $299, according to Gallagher.

"Thanks to machine learning, it progressively understands you better; your pronunciation," he said.

"It can adapt to the user."

Chinese company iFlytex, a heavyweight in AI and voice recognition in Asia, presented a Translator 2.0 at the show capable of translating between Chinese and 30 other languages.

The latest Translator model was priced about $400.

This week at CES, Google announced it was building translation capabilities into an array of new products through its virtual assistant software.