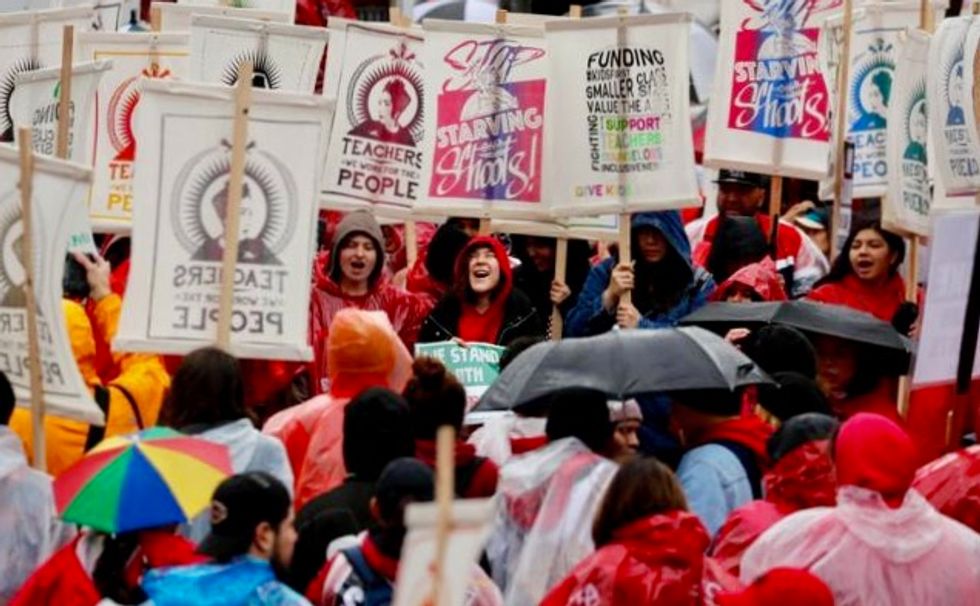 FILE PHOTO: Students attend a march by some of the more than 30,000 teachers in the Los Angeles public school system who held a rally at the City Hall after going on strike in Los Angele, California, U.S., January 14, 2019. REUTERS/Mike Blake/File Photo

Union leaders urged striking Los Angeles teachers to turn out en masse for a rally on Friday marking the fifth day of their walkout against the second-largest U.S. school district, seeking to boost their bargaining position in marathon labor talks.

Some 30,000 teachers who have gone without a contract for nearly a year walked off the job on Monday demanding higher pay, smaller classes and more support staff. It was the first such work stoppage to hit the Los Angeles Unified School District in three decades.

The labor strife in Los Angeles follows a wave of teacher strikes last year across the United States over salaries and school funding, including walkouts in West Virginia, Oklahoma and Arizona.

Another key point of contention in Los Angeles has been the teachers’ calls for restraint in LAUSD’s steady expansion of independently managed charter schools that the union argues are diverting resources from traditional classroom instruction.

School District Superintendent Austin Beutner has said the demands, if fully met, would inflict too great a budget strain. The union’s president, Alex Caputo-Pearl, has insisted sufficient funding is available given the right priorities.

The two sides returned to the bargaining table around midday on Thursday, meeting for the first time since 21 months of talks broke off a week ago with the union’s rejection of what was then management’s latest offer.

Mayor Eric Garcetti, who has no direct authority over the school district, was acting as a mediator in the talks.

A union spokeswoman told Reuters by email Thursday night that negotiators were still at it some nine hours after they started. It was not clear how long they would continue to work before taking a break.

At a news conference earlier in the evening, Caputo-Pearl said bargaining would likely extend into the weekend. “An agreement is not going to take shape overnight,” he said, but added, “This is not going to be months.”

Caputo-Pearl said it was crucial for union rank-and-file to achieve a major turnout at a rally planned for Friday morning in downtown Grand Park.

The strike has disrupted classes for nearly 500,000 students, though support for teachers was running high among parents and among the public at large as reflected in a recent survey of Los Angeles residents.

District officials have kept all 1,200 schools open on a limited basis with a skeleton staff, but attendance was running well below normal.

Caputo-Pearl cited teachers’ demands to reduce class size by hiring more teachers as “arguably the most fundamental” stumbling block. The parties are closer on salary.

Caputo-Pearl said California Governor Gavin Newsom has weighed in with both sides and would likely “play a key role” in helping clinch a deal.