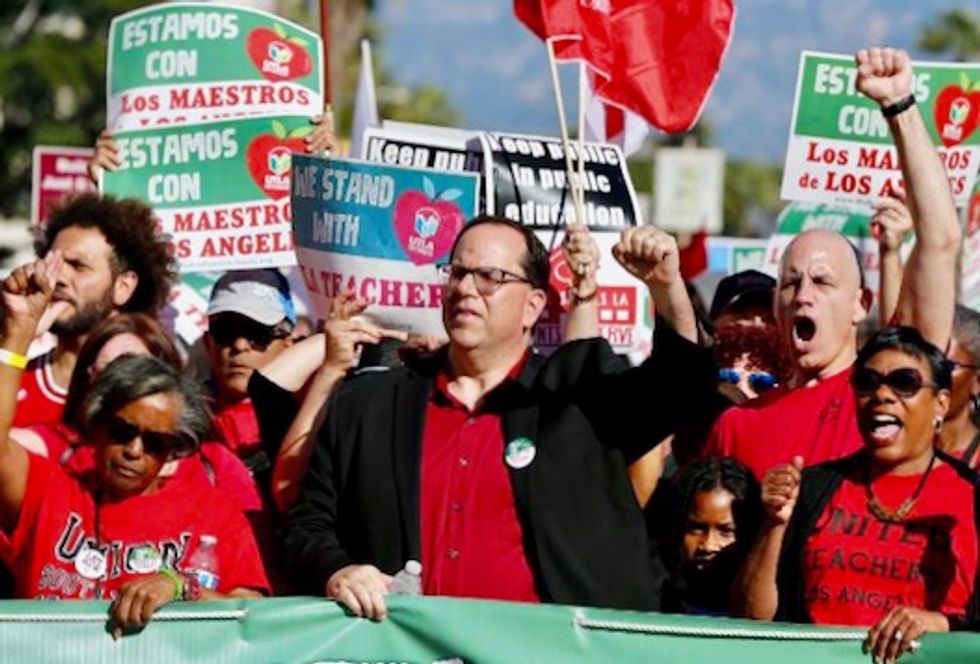 The growing number of charter schools in the Los Angeles County school system - and the school board’s support for them - is one of the most contentious issues in this week’s teachers’ strike in America’s second-largest school system.

School Superintendent Austin Beutner says that claim is baseless, but his supporters have strongly promoted charter schools, which are publicly funded but privately operated.

A 2017 school board election that pitted teacher unions against charter school backers resulted in a pro-charter majority on the board.

Most charter school employees are not unionized.

At a rally on Tuesday, teachers from three charter schools joined the UTLA strike, the first time that has happened. The teachers at those three schools run by Accelerated Schools, are represented by the UTLA.

“What they’re demanding is basically fairness with other teachers in California, like having a voice and not being afraid of being fired the moment they use that voice on behalf of student needs or their own professional judgment,” American Federation of Teachers President Randi Weingarten told Reuters. “They have an astronomical turnover rate.”

Thousands of protesters, many of them wearing red shirts and jackets in solidarity with their union, flooded the streets around the California Charter Schools Association in Los Angeles on Tuesday, chanting “We are the union, the mighty, mighty union.”

Charter schools have grown in response to demand from parents for school options. The schools usually offer different approaches than traditional public schools, including programs that emphasize math, science or the performing arts, according to the California Charter Schools Association.

Nationwide, students at most charter schools perform about the same as their peers at traditional public schools, according to research from Data First at the Center for Public Education, which is funded by the Bill and Melinda Gates Foundation.

“However, research also shows that students in charter high schools score higher on college entrance exams and are more likely to graduate high school and attend college than similar students in traditional public schools,” it said.

District officials have kept schools open in Los Angeles and will offer regular after-school programs, mindful that working-class parents cannot afford independent child care during the strike. The district has hired about 400 substitute teachers, a move the union has called “illegal.”

Many parents have expressed support for the teachers and only around a third of the affected half-million students are showing up at school.