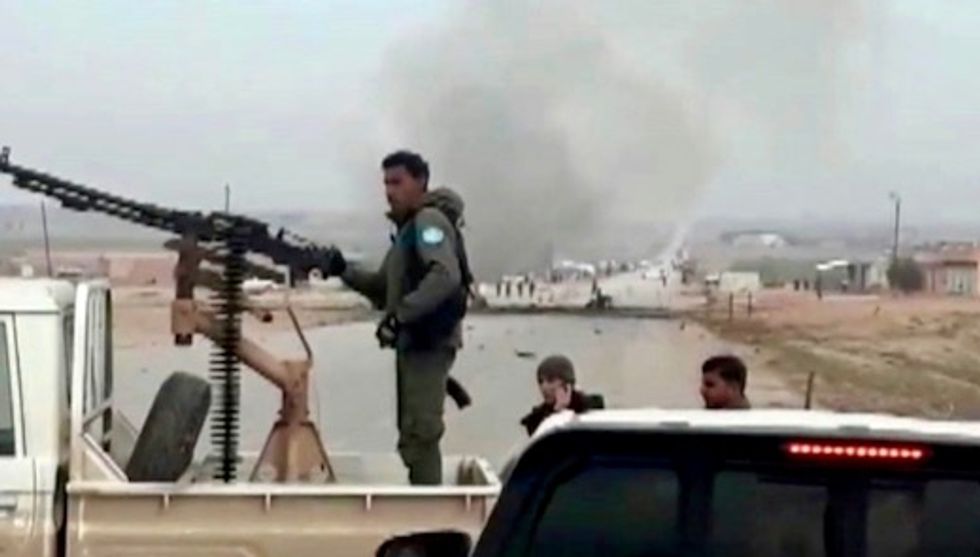 An image grab taken from a video published by Hawar News Agency (ANHA) on January 21, 2019 shows the scene of a suicide car bomb attack on an anti-jihadist coalition convoy in Syria's northeastern Hasakeh province ANHA/AFP /

A suicide bomber attacked a convoy of US troops and their allies in Syria on Monday, killing five members of a Kurdish-led force fighting the Islamic State group, a monitor said.

The assault, claimed by IS jihadists, came less than a week after another deadly attack on US forces in Syria, and a month after Washington announced a US troop pullout from the war-torn country.

The Britain-based Syrian Observatory for Human Rights said five fighters from the US-backed Syrian Democratic Forces were killed in the blast on a road in northeastern Hasakeh province.

"A suicide attacker driving a bomb-laden car targeted a convoy of American forces accompanied by the SDF on the Hasakeh-Shadadi road," said the Observatory, a monitor that relies on a network of sources inside Syria.

Shadadi lies to the south of Hasakeh, capital of the eponymous province, which has been relatively spared by the war that erupted in Syria nearly eight years ago.

The coalition confirmed the attack by a vehicle-borne improvised explosive device (VBIED), but said there were no US casualties.

"A combined US and Syrian partner force convoy was involved in an apparent VBIED attack today in Syria," coalition spokesman Sean Ryan tweeted.

"There were no US casualties."

Footage on Kurdish media showed a plume of grey smoke rising from a road flanked by dry land.

ANHA/AFP / -An image grab taken from a video published by Hawar News Agency (ANHA) on January 21, 2019 shows the scene of a suicide car bomb attack on an anti-jihadist coalition convoy in Syria's northeastern Hasakeh province

A witness told AFP the blast happened by a checkpoint held by Kurdish forces 12 kilometres (eight miles) outside Shadadi as the convoy drove past.

The witness said he heard planes fly overhead, before the area was completely cordoned off by Kurdish fighters.

The Kurdish security forces known as Asayesh said the attack hit 10 metres (yards) from a checkpoint outside Shadadi, but unlike the Observatory it said no one had died.

"A bomb-laden car driven by a terrorist tried to target a coalition convoy as it passed by, lightly wounding a female member of the Asayesh," the statement said, reporting no other injuries.

The reason for the conflicting casualty tolls was not immediately clear.

The car bombing came less than a week after another attack, also claimed by IS, on the US-led force and its local partners in the strategic city of Manbij.

Four Americans -- two members of the military, a Pentagon civilian and a contractor -- were killed in a suicide bombing targeting a restaurant in the city centre on January 16.

That attack cost Washington its worst combat losses since it deployed in the war-torn country to combat IS jihadists, who established a self-proclaimed "caliphate" across swathes of Iraq and Syria in 2014.

Ten civilians and five SDF fighters were also killed in the Manbij attack.

The US had previously reported only two American personnel killed in combat in Syria, in separate incidents.

Later on Monday, IS threatened US forces and their allies with new attacks, saying on the Telegram messaging app that "what happened to them in Hasakeh and Manbij is only the beginning".

This month's attacks targeting the US-led coalition and its allies follow US President Donald Trump's shock December announcement that he had ordered a complete troop pullout from Syria, as IS had been "largely defeated".

Trump and other senior US officials have since sent mixed messages about the pace and scope of the withdrawal.

On Sunday, a former envoy to the US-led coalition said the United States had no plan for Syria after the pullout.

Brett McGurk, who quit in protest after Trump's pullout announcement, told an interview with CBS "there's no plan for what's coming next" and this is increasing the risk to US forces.

Turkey has repeatedly urged Washington to make way for its own military plans in northern Syria, where the beleaguered Kurds are increasingly turning to the regime and its Russian sponsor for support.

In a phone call with Trump on Sunday, Turkey's President Recep Tayyip Erdogan said Ankara was ready to take over ensuring the security of Manbij.

He said last week's deadly attack was a "provocation" aiming to impact the decision to withdraw US troops from Syria, where a civil war has killed more than 360,000 people since 2011.

The SDF is fighting to expel IS fighters from the remaining shreds of their "caliphate" in eastern Syria near the Iraqi border, but the jihadists have continued to claim attacks nationwide and abroad.