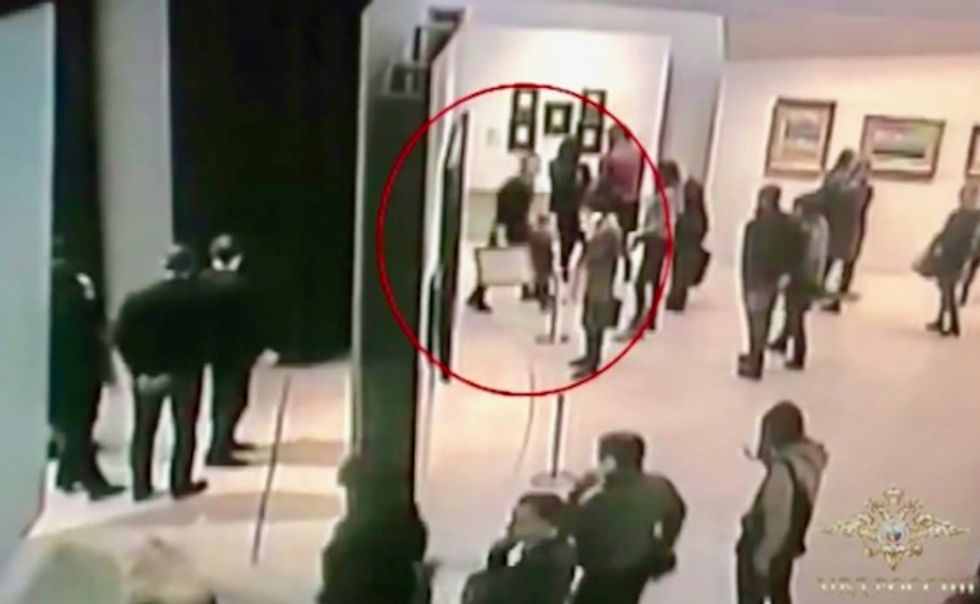 A man who snatched a 19th-century painting off the wall in a busy Moscow museum and calmly walked out has been arrested, authorities said Monday.

The suspect took a Crimean landscape by Russian artist Arkhip Kuindzhi and carried it through a room filled with visitors on Sunday, footage aired on state television showed.

It is the second security incident to hit the capital's Tretyakov gallery in a year, after a visitor in May seriously damaged a painting of Ivan the Terrible.

The Russian interior ministry said a 31-year-old man was detained Monday in a village outside Moscow.

He admitted hiding it on a construction site from where it was recovered, a ministry statement said.

The painting, depicting the Ai-Petri mountain in Crimea, was completed between 1898 and 1908.

The ministry published a video of his arrest that showed armed police holding the man to the floor and recovering the painting, that appeared not to be damaged.

Russian Interior Ministry/AFP / Handout It's the second security incident to hit the capital's Tretyakov gallery in a year, after a visitor in May serously damaged a painting of Ivan the Terrible

Authorities said the man had previously been charged with drug possession and was currently not allowed to leave Russia. Police are working to establish if he had accomplices.

"Security measures at the Arkhip Kuindzhi exhibition and all sites of the Tretyakov Gallery have been strengthened," it added.

The Kremlin on Monday said the gallery is "protected at a proper level" but added that "conclusions must be drawn".

It also praised authorities for recovering the painting.

"Thank God, thanks to the energetic efforts of our law enforcement officers, the painting was found quickly and efficiently," Kremlin spokesman Dmitry Peskov said.

The theft comes after a man slashed a painting by celebrated Russian artist Ilya Repin, depicting 16th-century Tsar Ivan the Terrible after he killed his son.

Police arrested a 37-year-old who used a metal pole to break the glass covering the picture, damaging the work in three places.

The gallery is currently hosting an exhibition with more than 120 Kuindzhi paintings that will run until February 17.

On its website, the gallery calls Arkhip Kuindzhi, who died in 1910, "one of the most memorable figures in Russian painting of the second half of the 19th century."