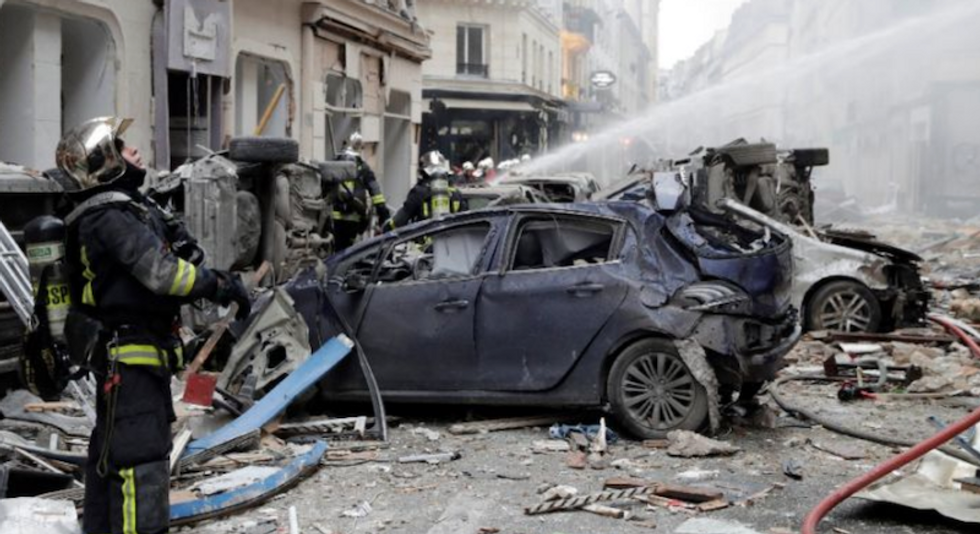 A powerful gas explosion tore through a building in central Paris on Saturday killing a Spanish woman and two firefighters hailed as heroes by French President Emmanuel Macron.

Dozens more were injured in the blast which also badly damaged nearby apartments, officials said.

Around 200 firefighters were mobilised to battle the fire that broke out after the explosion and evacuate victims and residents in the area, Interior Minister Christophe Castaner told reporters at the scene.

The explosion came with the city on edge during the latest "yellow vest" anti-government demonstrations, which have often degenerated into violence and vandalism in Paris and other cities in recent weeks.

Cars were overturned by the blast and glass and rubble was strewn across large swathes of the street after the explosion gutted the lower part of the building. Dozens of residents were treated by rescue workers on the road.

"I was sleeping and was woken up by the blast wave," Claire Sallavuard, who lives on the Rue de Trevise where the explosion occurred, told AFP. "All the windows in the apartment exploded, doors were blown off their hinges, I had to walk on the door to leave the room, all the kids were panicking, they couldn't get out of their room."

"Firefighters advised us to leave but the elevator shaft had been blown out, there was no railing, nothing, and there was too much smoke," she said.

As well as the three dead, 47 people were injured in the blast, 10 of them seriously, the Paris prosecutor's office said.

The two firefighters who died were aged 27 and 28, it added.

A source in the Spanish foreign ministry said a woman who was holidaying with her husband in Paris died in hospital after the blast while another Spanish national was also injured.

Macron tweeted his condolences to the "families, loved ones and comrades of the two hero firefighters", adding that his thoughts were with all the victims.

Around 100 police officers blocked off several streets in the area, home to restaurants and tourist attractions including the Musee Grevin wax museum and the popular Rue des Martyrs.

The explosion occurred shortly after 9:00 am (0800 GMT) in a building that housed a bakery as well as a restaurant on the ground floor.

"It happened when there were people in the street, and firefighters inside," the interior minister said.

The cause was thought to be accidental, "but at this stage we do not exclude any hypothesis", Paris public prosecutor Remy Heitz added.

The shockwave was felt as far as four blocks away, Commander Eric Moulin of the Paris fire service said, adding that rescuers were still searching for other victims.

Firefighters had been responding to an alert of a gas leak at the site when the explosion occurred, Paris prosector Heitz said at the scene.

"First there was a gas leak and the firefighters arrived, then there was an explosion that caused the fire," he said.

Dozens of tourists, suitcases in hand, were evacuated from the many nearby hotels in the area.

Other residents were in bathrobes or quickly dressed in the street as police helicopters circled overhead.

One man found himself barefoot in the street, his hair completely white from the dust.

Another resident, an elderly woman, still dressed in her pyjamas and dressing gown had to be evacuated from her second floor apartment using a firefighters ladder.

"We were sleeping when we heard the noise, it sounded like an earthquake," a teenager who lives on a nearby street told AFP.

"We came downstairs and we saw a building on fire," her brother said.

Many homes and buildings in Paris use gas for heating and cooking, though explosions due to leaks are relatively rare.

"The Parisian gas network is in a state of advanced state of dilapidation," local councillor Alexandre Vesperini told the Le Parisien newspaper, likening the blast to "a truly murderous cannon ball".

While Osama bin Laden was escaping Afghanistan — Rumsfeld was in a meeting planning the Iraq war: book

The late former Defense Secretary Donald Rumsfeld is generally regarded to be one of the architects behind the war in Iraq even though Osama bin Laden, who was being given shelter in Afghanistan at the time, was the primary architect of the 9/11 attacks.

In a new biography by CNN reporter Peter Bergen about Osama bin Laden, it was revealed that Rumsfeld was ignoring what was happening on the ground in Afghanistan, allowing bin Laden to escape the country.