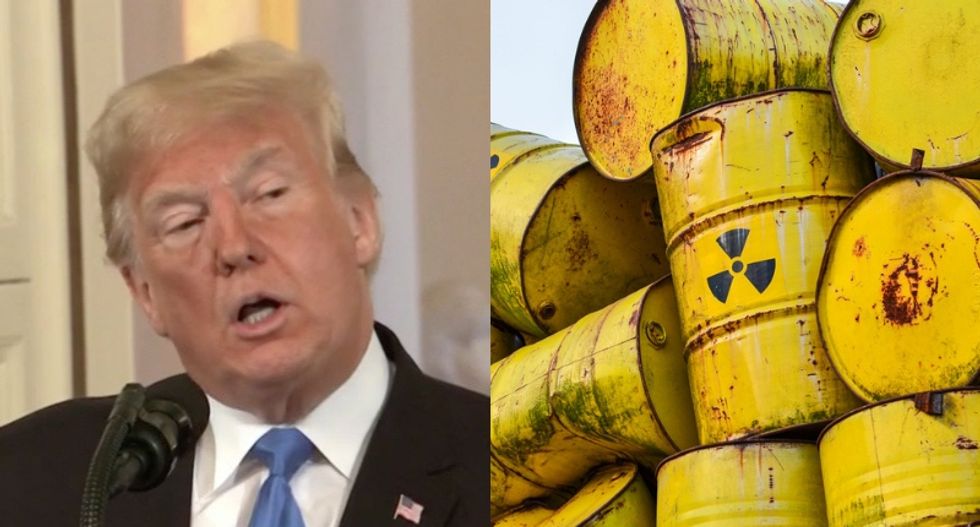 President Donald Trump (left, via screengrab) and a pile of nuclear waste barrels (right, via Shutterstock).

The Trump administration was caught shipping radioactive plutonium to Nevada — in spite of the state's opposition to a plan to store the toxic chemical in the state.

The Nevada Independent reported Wednesday that Nevada Gov. Steve Sisolak said he is "beyond outraged" after the National Nuclear Security Administration admitted in court to sending half a metric ton of "weapons-usable plutonium" to the Sagebrush State.

"I am beyond outraged by this completely unacceptable deception from the U.S. Department of Energy,” the governor wrote in a statement. “The Department led the State of Nevada to believe that they were engaging in good-faith negotiations with us regarding a potential shipment of weapons-grade plutonium, only to reveal that those negotiations were a sham all along."

As first reported by DC-based defense reporter Dan Leone on Twitter, NNSA General Counsel Bruce Diamond said in a court filing that the agency shipped the plutonium to Nevada sometime before November 2018, when the state sued the Trump administration over what was then considered a proposed move.

"The transfer was done after a U.S. District Court in South Carolina ordered the material be removed from that state," the Independent report noted.

"They lied to the State of Nevada, misled a federal court, and jeopardized the safety of Nevada’s families and environment,” Sisolak said. “My administration is working with our federal delegation, and we will use the full force of every legal tool available to fight back against the federal government’s reckless disregard for the safety of our state.”