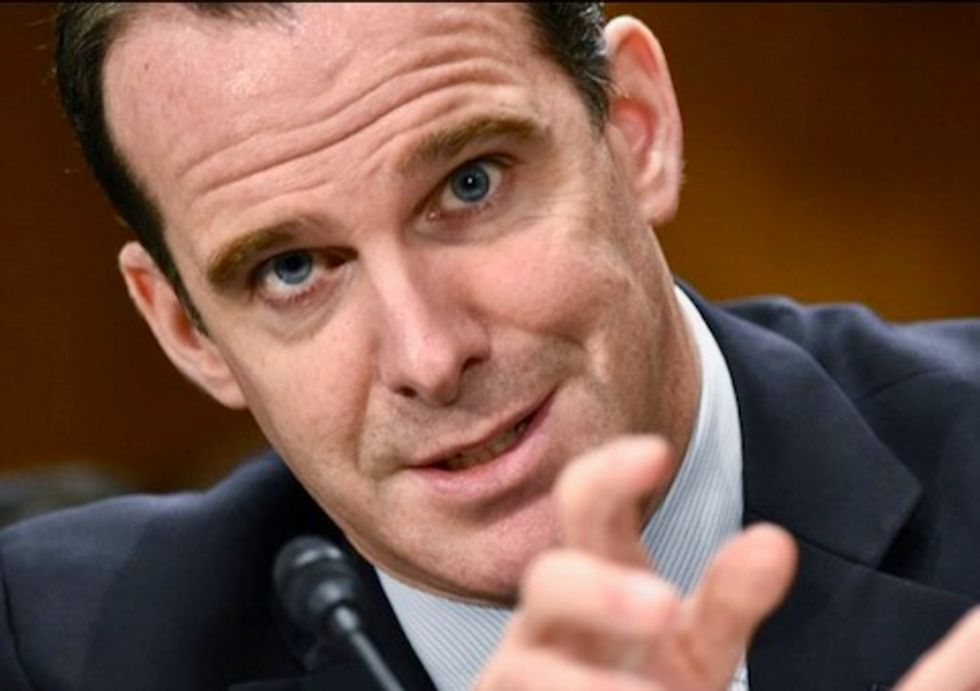 President Donald Trump's decision to pull US troops from Syria was made without deliberation, left allies "bewildered" and has rejuvenated the Islamic State group, the official formerly in charge of fighting the jihadists said Friday.

Brett McGurk, who quit as America's envoy to the anti-IS coalition after Trump declared victory over the group last month, warned a US withdrawal would shore up President Bashar al-Assad and lessen America's leverage with Russia and Iran.

And "the Islamic State and other extremist groups will fill the void opened by our departure, regenerating their capacity to threaten our friends in Europe —- as they did throughout 2016 —- and ultimately our own homeland," McGurk wrote in an opinion piece in The Washington Post.

McGurk, a Barack Obama-era appointee whom Trump kept on, said he was in the US embassy in Baghdad on December 17 when he got an urgent call from Secretary of State Mike Pompeo informing him of Trump's decision.

"But that was not true, and we have continued to conduct airstrikes against the Islamic State," McGurk said.

The decision came just days after National Security Advisor John Bolton had suggested an indefinite US troop presence in Syria, and as McGurk and then defense secretary Jim Mattis met coalition partners to confirm commitments for at least the next year.

"My counterparts in coalition capitals were bewildered," McGurk said.

"The president's decision to leave Syria was made without deliberation, consultation with allies or Congress, assessment of risk, or appreciation of facts."

McGurk said Trump had made his decision after a phone call with Turkish President Recep Tayyip Erdogan, who had said Istanbul would lead the fight against IS remnants in Syria.

But Turkey has also vowed to take action against US-backed Syrian Kurds who have conducted the fight against IS and lost thousands of troops as they slowly wrested territory from the jihadists.

"The irony is that defeating the Islamic State is what the president said from the beginning was his goal," McGurk said.

"His recent choices, unfortunately, are already giving the Islamic State -- and other American adversaries -- new life."

Just one month after Trump declared victory over IS, the jihadists claimed responsibility for a brutal attack in Syria this week.

Four Americans, including two services personnel, were among those killed when a suicide bomber hit a restaurant in the key city of Manbij in Syria's north -- the deadliest attack against US forces since they first deployed in the war-torn nation four years ago.

The Pentagon on Friday identified three of those killed.

Among them was Navy Chief Cryptologic Technician Shannon Kent of New York. Her death marked the first time a female US service member was killed in Syria.

Former President Donald Trump, as an ex-president, will get secret service protection, but according to the Washington Post, so will his family and several of his top aides at the expense of the American taxpayer.