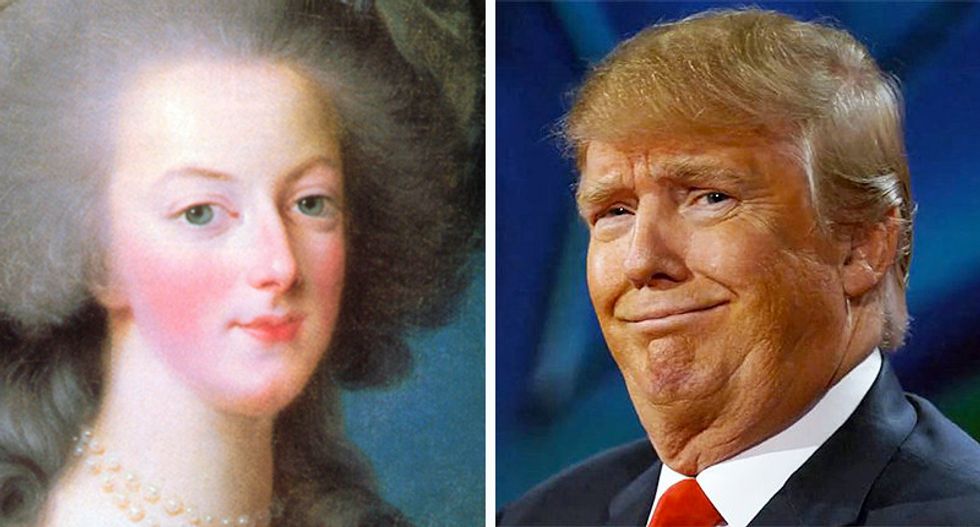 The President Donald Trump's shutdown of the federal government is his "Marie Antoinette moment" as the closure continues, a MSNBC guest explained on Saturday.

Antoinette was the last queen of France before the French Revolution.

MSNBC anchor Alex Witt played two clips on the shutdown, one from Sen. Chuck Schumer (D-NY) and by Trump.

"We made a plea to the president once again -- don't hold millions of Americans, hundreds of thousands of workers, hostage," said Schumer, the Democratic leader in the Senate.

"I'm very proud of doing what I'm doing. I don't call it a shutdown, I call it doing what I have to do for the benefit and safety of our country," Trump argued.

"What about what the president said, floating bypassing Congress altogether, trying to declare a national emergency, get his border wall funding. Is that fair play?" Witt asked.

"Not only is it not fair play, it's probably not constitutional," Alaina Beverly replied.

Beverly served as the associate director of the White House Office of Urban Affairs during the Obama administration.

"This is not the way that the system is supposed to work in terms of policy," she added.

"However, I will say that I think that this government shutdown is president trump's Marie Antoinette moment, where he's saying, basically, 'let them eat cake' -- while his cabinet members are receiving $10,000 annual raises, he's saying that the 800,000 federal employees affected by this shutdown should just tell their landlords to be easy and figure it out when it comes time to paying their utilities," Beverly explained.

"That is an interesting analogy there, first time I've heard that, but it certainly applies," Witt noted.

Antoinette was convicted of high treason, among other crimes, and was guillotined in 1793.

She was buried in an unmarked grave.