Trump supporter who laughed at Dr. Ford as president mocked her swears he's a good person 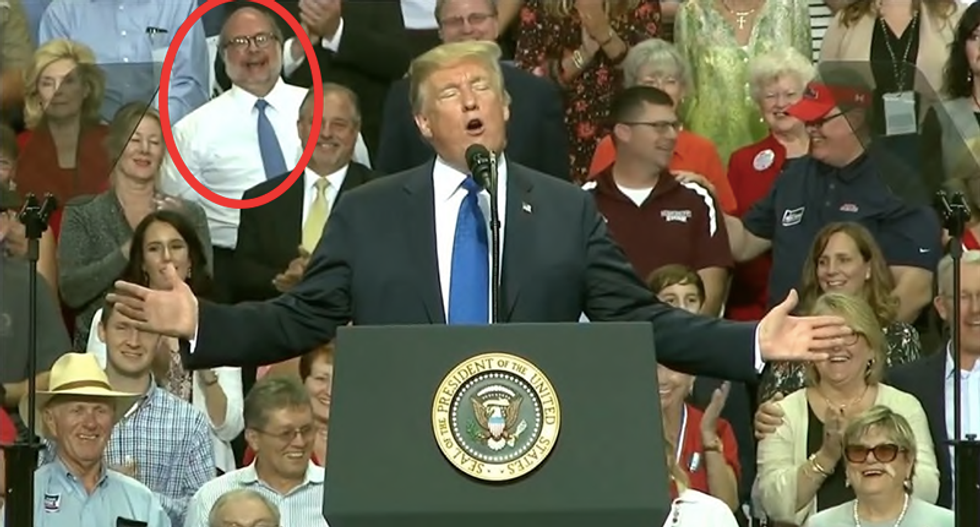 “I’m a softy. I care. It’s just the way I was raised," Joe Davidson told the Washington Post for an extensive profile on him. Davidson was one of the many old, white men standing behind President Donald Trump when he mocked and ridiculed Dr. Christine Blasey Ford. Her tearful testimony recalling her assault was just days prior to the event. The Trump supporter was caught on camera laughing as the president mocked a survivor of sexual assault.

While some fellow Trump supporters lined up beside Davidson, others question the humanity of Davidson.

“Who laughs at sexual abuse?” asked one person, the Post cited from social media.

“Old white men afraid they will lose their privileges,” another said.

“How can they be so uncaring?”

Davidson told the Post he wished people knew he was caring for his wife who had cancer and grandbabies.

When it comes to the president, he feels like Trump is getting a raw deal.

Except Davidson wasn't just standing behind Trump. He was laughing at a survivor of sexual assault while the president was making fun of her.

Davidson inherited money from his father's cotton farm but he promised he would never turn out to be a "rich jerk."

"He wished all the people judging him knew that he had been caring for his sick wife, who was home recovering from surgery," the Post wrote. "He wished they knew that before he left for the rally, he had taken her to the doctor to get a chemotherapy port installed. If people wanted to judge Joe Davidson, he would gladly tell them that...He opened doors for the elderly. He tipped well. He said, “Love you, appreciate you!” to the lunch waitresses at the Senator’s Place."

The excuses and gushing continued for several paragraphs in the Post profile. With each grouping of words, it seemed as if Davidson was trying to justify his laughter at the assault survivor.

"He would love to tell all the people who said he must hate women that he had always been surrounded by strong women," the profile said. "He loved his wife, who was one of the strongest people he knew. He loved Little Bun, who used to sit in the back seat of his car while he drove her all over town, and was never afraid of expressing an opinion."

At no point does Davidson apologize to Dr. Ford for laughing at her while Trump mocked her. The phrase "I'm sorry doesn't appear anywhere in the 3,500-word profile on him. He doesn't seem remorseful, and more he's trying to justify his behavior by showing he's empathetic in the rest of his life. He cares about family, friends and people in his community. But when it comes to someone he says he believes was assaulted, the empathy fell to laughter.

“Well, it’s been a whirlwind since Kenny and I attended President Trumps rally in Southhaven," Davidson posted at the time of the event. "We have been blasted by the left on social media, called everything in the book by people who don’t even know us…. I was in NO WAY making fun or trying to be insensitive to Dr Fords plight… I really believe she went through a terrible time and something did happen, but not by Judge Kavanaugh… We live in the greatest country in world and I am super proud to be able to do so!! God Bless America”

It's still unclear why Davidson found it was acceptable to laugh at the women he said he feels empathy for.