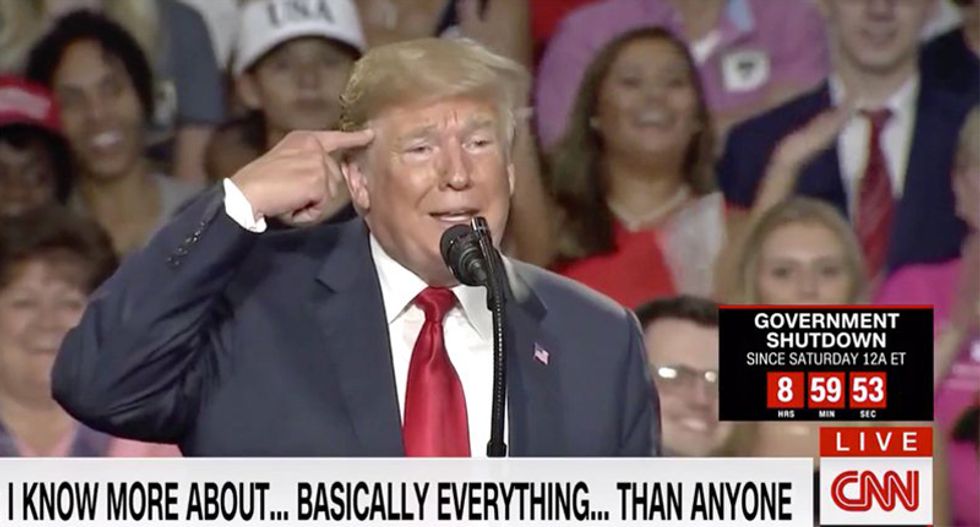 CNN chyron reading, 'Trump: I know more about ... basically everything... than anyone' (screengrab)

Statistician Nate Silver suggested President Donald Trump is telegraphing a "dumb 2020 strategy" by shutting down the government in an attempt to get U.S. taxpayers to foot the bill for the border wall he had promised Mexico would fun.

Silver, the editor in chief of 538, noted Trump's declining poll numbers during his shutdown, which is now in its 26th day.

Silver even calculated how Trump's polling numbers were moving each week of the shutdown.

"Trump’s approval ratings had been steady at about 42 percent for several months before the shutdown. Since then, they’ve been declining at a fairly linear rate of about half a point for every week that the shutdown has been underway, while his disapproval rating has increased by half a point per week," he explained.

Silver noted the 2020 election is still a long way off, but said, "t

here are some reasons for Trump and Republicans to worry that the shutdown could have both short- and long-term downsides."

Trump could be in the worst political position of his presidency by March.

"For one thing, there’s no particular sign that the shutdown is set to end any time soon. And if the decline in Trump’s approval rating were to continue at the same rate that it has so far, it would take his political standing from bad to worse," he explained. "By Jan. 29, for example, the day that Trump was originally set to deliver the State of the Union address before House Speaker Nancy Pelosi disinvited him from addressing Congress, his approval rating would be 39.3 percent, and his disapproval rating would be 55.9 percent."

"By March 1, at which point funding for federal food stamps could run out, his approval rating and disapproval rating would be 36.9 percent and 58.4 percent, respectively, roughly matching the lowest point of his presidency so far," he noted.

Silver also said that the shutdown may be harming Trump with Capitol Hill Republicans.

"Congressional Republicans are not a group Trump can easily afford to lose. They have a lot of power to check Trump’s presidency, from modest measures such as treating his Cabinet nominations with more scrutiny to extreme ones like supporting his impeachment and removal from office," he reminded.

Silver also noted, "the shutdown has prompted Trump to double down on his all-base, all-the-time strategy."

"The lesson of the midterms, in my view, was fairly clear: Trump’s base isn’t enough," he concluded. "Despite some initial attempts at reaching out to the center, such as in passing a criminal justice bill in December and issuing trial balloons about an infrastructure package, Trump’s strategy of shutting down the government to insist on a border wall was aimed at placating his critics on the right, such as Rush Limbaugh and Ann Coulter, and members of the House Freedom Caucus."

Taken together, 2020 may look more like the 2018 midterms than the 2016 election when Trump won the Electoral College despite losing the popular vote.

"In the midterms, voting closely tracked Trump’s approval ratings, and he paid the price for his unpopularity," he reminded.

OK, finally had to write about the political implications of the shutdown. It's clearly hurting Trump’s approval ra… https://t.co/WpmDq0UdKz
— Nate Silver (@Nate Silver) 1547683496.0

The case against: —Shutdowns tend to have short-lived effects on e.g. approval ratings —Too early for approval rati… https://t.co/EgjFCz6LKv
— Nate Silver (@Nate Silver) 1547683867.0