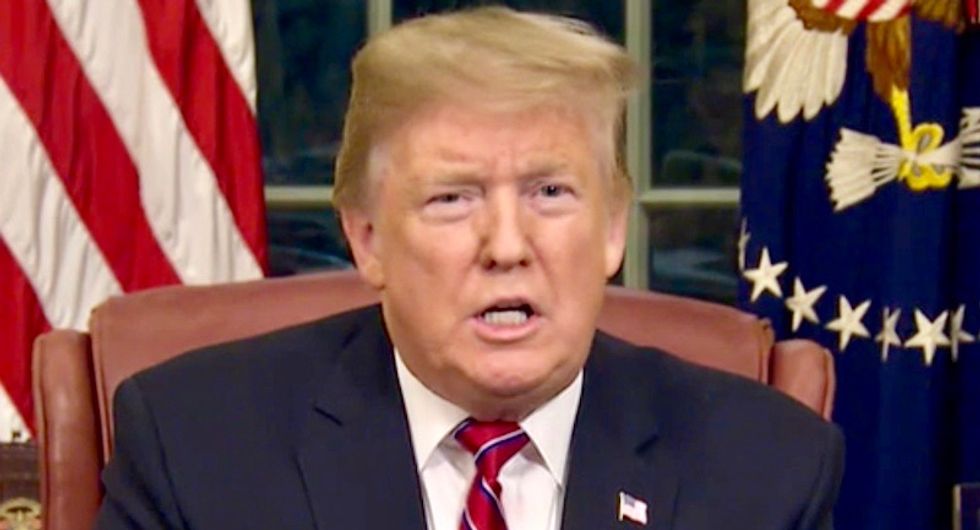 President Trump addresses the nation about his proposed border wall/Screenshot

As Republicans and Democrats sit down to try and hammer out a funding bill that addresses the security of the southern U.S. border, President Donald Trump is butting in.

Trump fired off an early morning tweet in which he said that the two parties would be wasting their time unless they spent their talks focused on the wall he promised voters Mexico would pay for.

If the committee of Republicans and Democrats now meeting on Border Security is not discussing or contemplating a W… https://t.co/xvjdjS7Ted
— Donald J. Trump (@Donald J. Trump)1548848966.0

On Wednesday, a Washington Post columnist explained why this is a huge opening for Democrats.

"Trump is letting it be known that he will continue to define 'border security' as a 'wall' or 'barrier' — that is, as a down payment on a large and monolithic superstructure that fulfills the fantasy he promised his supporters," writes columnist Greg Sargent. "That could make it harder for Republicans to accept a deal that spends billions on real border security, just not quite to Trump’s specifications, without enraging the base."

Because Trump is obsessed with a wall and not the type of border security that experts say works the best, Democrats have "an opening to go into these talks with a reality-based agenda to address the real problems at the border. And the early signs are that they are going to do just this."

While Trump likes how the border security issue plays with his base, it could be another opportunity to demonstrate the weakness of his leadership, Sargent says.

"The new Democratic offer in conference negotiations is an attempt to reframe this whole debate, and shift it to a reality-based discussion of what the real crisis genuinely calls for right now," he writes.

George Floyd pleaded for help with his "very last breath" but was not shown any compassion by Derek Chauvin, prosecutor Steve Schleicher said Monday in closing arguments at the murder trial of the former police officer.

"George Floyd begged until he could speak no more," Schleicher told the jury in a Minneapolis courtroom. "All that was required was a little compassion and none was shown on that day."

Sen. Ted Cruz (R-TX) on Monday once again tried to smear Democrats as the party of racism -- and got quickly shot down.

Writing on Twitter, Cruz bashed Senate Democrats for holding hearings on the history of racist laws passed in the Southern United States intended to discriminate against Black Americans.