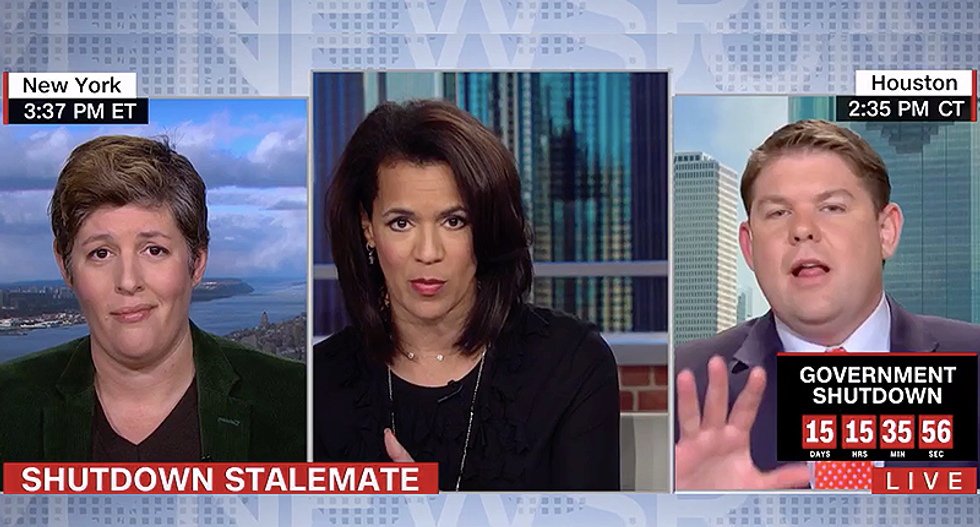 Conservative pundit Ben Ferguson got a little defensive when progressive analyst Sally Kohn called out the White House and their surrogates for making things up to support the claim America is under attack.

President Donald Trump has argued that the country is in a national crisis and that the situation on the border should be a reason that he can declare a national emergency so he can build his wall. The border isn't actually in a crisis scenario; there are far fewer migrants attempting to enter the United States now than before Trump taking office. Former President Barack Obama managed to deal with the problem without declaring an emergency. He eventually became known as the "Deporter in Chief."

"With all due respect," Kohn began in the discussion Sunday. "This is fearmongering of the worst order. It's ginning up fear, resentment, hate, all of this to get what you want because, for two years when your party controlled both houses of Congress, you couldn't get it done."

"Let's just call it what it is, lying about saying there were 4,000 terrorists, some of whom came across the southern border," Kohn said.

Ferguson jumped in to defend himself and Sanders, citing the California police officer that was murdered by an undocumented immigrant. Kohn asked how that immigrant got into the country, but Ferguson didn't know. Most immigrants who stay in the U.S. illegally, do so by overstaying a visa and getting into the U.S. through a plane trip. It's one of the main reasons Democrats say Trump's wall won't be effective.

According to the list of violent crimes committed by those with legal status compared to those undocumented, immigrants commit fewer violent crimes than their citizen counterparts. Statistics also show the overwhelming amount of crimes are property related, the second is larceny or theft and the third is burglary.

Ferguson got defensive and began shouting saying that people were trying to escape the man to Mexico on the border, but Ferguson still couldn't explain how the man came into the country.

"That is the fact of the matter here!" Ferguson shouted over CNN host Fredricka Whitfield. "It's not fearmongering! Talk to people in Texas! I'm in Texas right now! People here, where I am in Houston right now, who have been killed by illegal immigrants that come across the border illegally. And you say it's fearmongering!?"

Most of the Texas people that live on the border agree they don't want to see a massive wall and several who own property on the border are fearful Trump will take their land to build the wall. Since Ferguson is in Houston, he should know that the Houston Chronicle showed a poll that most Texans don't want the wall.

Kohn said that it's obvious Trump is throwing a tantrum because he didn't get what he wanted with Republican control for two years.