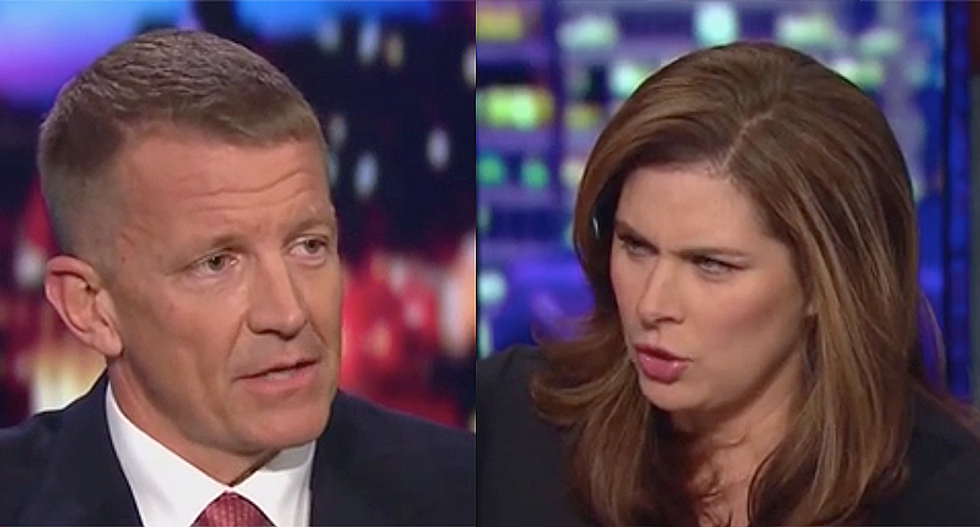 It's unclear if Blackwater would be one of the corporations contracted to build President Donald Trump's border wall, but founder Erik Prince is already a believer.

Congress has refused to fund Trump's border wall, both under Republican leadership and now with Democrats in charge of the House. His latest solution is to declare a national emergency and it would give him access to funds to do whatever he wants. While legal scholars have warned this would provoke the Constitutional crisis they feared, Prince is a believer.

In a CNN interview with Erin Burnett, Prince said that the drugs coming into the United States are the worst part of the border crisis. While drugs coming into the United States are a problem, the opioid problem was made by pharmaceutical companies. Trump hasn't done anything to stop those companies that continue to manufacture the drugs. Similarly, Trump's opioid council that has spent years working to find a solution has yet to do so and no programs have been started to deal with the huge number of people who can't get treatment.

"Look, are we a nation of laws or are we not?" Prince asked. "And I think having a wall, having actual border security gives you the option to have an actual wall, but with a wide gate."

Prince bragged he has a contract manufacturing business with a few thousand employees and he said it's hard for businesses to do the work to research an employee's status. Trump has yet to put any pressure on businesses that illegally hire undocumented workers.

Facts show that the majority of the illegal drugs come in through the ports of entry or through the tunnels underneath the fences.

"So our Ed Lavendara has gone along the border, I know you have, too," Burnett continued. "And he's gone to places where we have some of the best wall that we've got down there because as we all know, there's more than 700 miles that has some sort of structure on it, and guess what? They tunnel under it, they go around it. You of all people would know those sorts of things. Why in the world would a wall stop it?"

Prince struggled, saying only that it removes the fastest and easiest option for those coming across. As a fact check, living in the desert for days is not as easy as legally driving through the port of entry or flying into the United States.

Prince railed against the cartels, saying that there just be policies to stop these and enforcement.

"Yes, but all of that could be very separate from an actual wall, right?" Burnett said.

"A wall is a simple tool, especially because you said there's a few miles of wall, but thousands of miles of nothing," Prince said, again incorrectly.

Prince described a group of drug dealers driving ATVs through the huge ravines and gullies to dump their load of drugs to their carriers. He didn't answer how a wall would stop someone from launching drugs using a T-shirt shooter over it, however.

"When you talk about a wall, though, you know, the White House is also saying terrorism is a part of this. That terrorists are coming in. Why would a wall stop a terrorist who really wanted to come in?" she asked.

Prince again tried to claim that the wall is a barrier to deny access. All of the people who have committed terrorist acts were American citizens or in the U.S. legally. Trump has never addressed how to stop those terrorists.