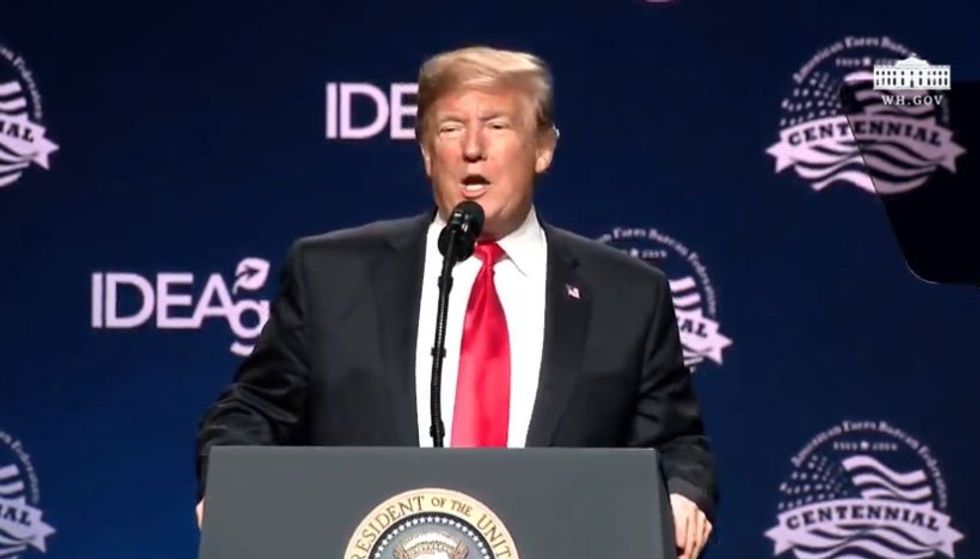 Donald Trump on Monday addressed the Farm Bureau ostensibly to tout his signing of the Farm Bill -- and in doing so pitched his border wall amid a fight that led to the longest government shut down in US history.

Below are the top five craziest moments from the president's Farm Bureau speech.

While noting that he was speaking at the 100th anniversary of the Farm Bureau, Trump made his love for farmers known when he pointed out that he'd attended the 99th convention too.

2. Gory claims about violence against women at the US-Mexico border

Trump's riff on women being trafficked across the border is getting more detailed by the day. In speech just now, h… https://t.co/LGU3JZ4sPD
— Felicia Sonmez (@Felicia Sonmez) 1547492395.0

The president used gory language to make claims about violence against women at America's border with Mexico -- and as Washington Post reporter Felicia Sonmez noted, it wasn't the first time.

"They tape their face, their hair, their hands behind their backs, their legs," Trump told the Farm Bureau audience.

3. Undocumented people who show up to their hearings are "not smart."

Fox News cuts away from Trump's speech after he rants about how undocumented immigrants who do show up to court hea… https://t.co/j5dSjVMNc7
— Aaron Rupar (@Aaron Rupar) 1547493103.0

While complaining about the "catch and release" policy in which undocumented people are arrested, released and given an immigration court date, Trump claimed that only two percent of people actually show up to their hearings -- and that those who do so are unintelligent.

"Those people, you almost don't want, because they cannot be very smart," the president said, spurring laughter in the crowd.

4. Bizarre slurring of "the Clintons."

Trump, slurring, misspeaks and accidentally says "Clintons," but pretends like he meant to do it all along https://t.co/JCBKl3tRSw
— Aaron Rupar (@Aaron Rupar) 1547493416.0

The president was arguing for his wall when he brought up a June 2018 incident in which Jim Chilton, an Arizona rancher, shot a Border Patrol agent -- and appeared to initially mix his name up with the Clintons.

As President Trump tells the ag industry that he has "virtually eliminated" the "death tax," here are some facts:… https://t.co/BRTPCxLcQh
— Phil Elliott (@Phil Elliott) 1547493702.0

Trump once again bragged about the elimination of the "death tax," terminology used to discuss the loathed estate tax.

But as Time's Phil Elliott noted, that claim is misleading.

In December 2017, FactCheck.Org reported that "while fewer people would have to pay it, revenue from estate taxes is expected to be cut by only a third over the next eight years."

"And then," the report noted, "the changes would expire."