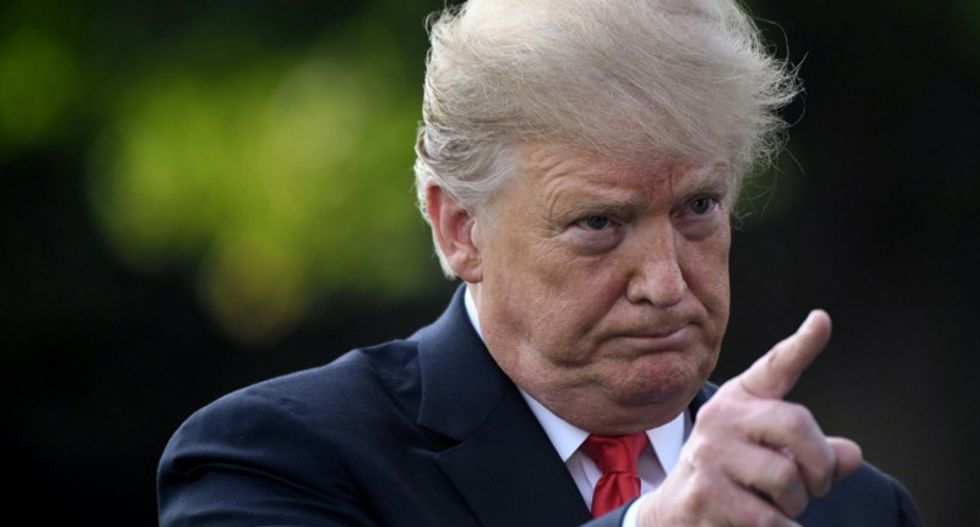 During his rambling Rose Garden press conference (the third such appearance in as many days), President Donald Trump covered a wide range of topics -- many of which left viewers more confused than not.

From his strange thoughts on eminent domain to his repeated insistence he's not a criminal, here are the seven most bizarre moments of Trump's latest presser.

1. Interrupting a reporter -- to say that federal workers are happy to not get paid

CNN White House correspondent Abby Phillip began asking the president why he wouldn't reopen the government "to create more space" for a discourse surrounding immigration -- but he interrupted her.

After a strange segue about the White House, Trump claimed that he'd spoken to federal workers who agree with his decision to shut down the government over his border wall fight, even if it meant them not getting paid.

"A lot of people that you think are upset and certainly they’re not thrilled, but they say, ‘Sir, do the right thing, we need border security,’ and these are people who are not getting paid,” Trump said.

2. No welcome signage at the US-Mexican border

During a long-winded rant about how poorly the current walls, fences and armed guards at ports of entry protect the country, Trump complained about a lack of signage differentiating between US and Mexico.

"You don't even have a sign saying, Mexico/US," he said. "There is no sign designating, 'you have just entered the United States.' Just open space."

3. Yelling at CNN's Kaitlan Collins: 'You're not in the construction business!'

Trump admonishes @kaitlancollins, "You're not in the construction business, you don't understand something. We have… https://t.co/CaMzAcoApz
— Aaron Rupar (@Aaron Rupar) 1546631216.0

CNN White House correspondent Kaitlin Collins reminded the president about the many times his goalposts shifted regarding the wall -- and he snapped at her.

"You're not in the construction business, you don't understand something," Trump said. "We have a rebuilt great steel business in the United States. Steel is stronger than concrete... you can't really see through a concrete wall."

4. 'The military version of eminent domain.'

After a free-wheeling explanation of how eminent domain works, Trump told veteran White House reporter April Ryan that he plans on using "the military version of eminent domain" to build his border wall.

"What we’re doing with eminent domain is in many cases we’ll make a deal up front, the secretary has done a lot of that and if we can’t make a deal, we take the land and we pay them through a court process, which goes actually fairly quickly and we’re generous," the president said.

"Under the military version of eminent domain and national security," he added, "we can do it before we even start."

Vox reporter Jane Coaston noted on Twitter while watching the speech that "the 'military version of eminent domain' would be...invasion."

5. Will 'absolutely' keep the government shut down for years

After Senate Minority Leader Chuck Schumer (D-NY) revealed that Trump threatened to keep the government shut down "for years" over the border wall fight, the president confirmed that he indeed said it.

6. Threatening a state of emergency to build the wall

When asked by a reporter if he'd considered "using emergency powers to grant yourself authorities to build this wall without congressional approval," Trump responded that he had.

"I can do it if I want," the president said. "We can call a national emergency because of the security of our country.

7. Claiming a Palestinian-American freshman congresswoman 'dishonored her family' for cursing about his impeachment

Responding to comments from freshman Rep. Rashida Tlaib (D-MI) in which she told supporters that she wants to "impeach the m*therf**ker," Trump said the Palestinian-American congresswoman was worthy of "dishonor."

In a legal blow for Donald Trump, the Supreme Court has cleared the way for presidential records dating from his time in office to be turned over to a House committee investigating the Jan. 6 attack.

Trump, through his lawyers, had sought to shield over 800 pages of information from the panel, citing executive privilege, which allows for a president to withhold certain information from public release. But in a 8-1 ruling, the Supreme Court on Jan. 19, 2022, rejected a request to block the documents from being handed to Congress.