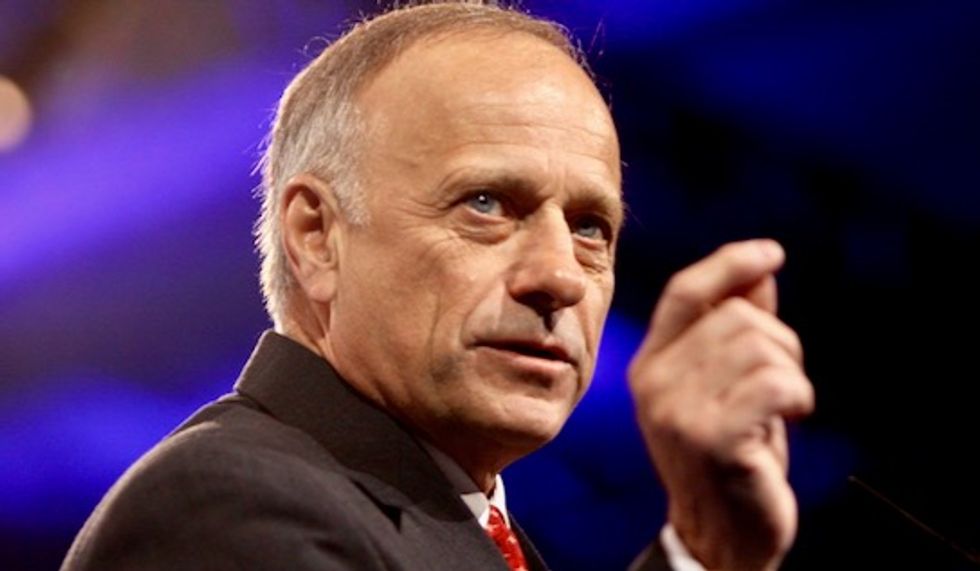 Steve King Gage Skidmore via Flickr and a CC license

U.S. Congressman Steve King (R-IA) is now defending himself after The New York Times published an interview Thursday in which he made remarks defending both white nationalism and white supremacism. Rep. King asked the paper of record when "white nationalism" and "white supremacism" became "offensive," drawing attention to his long history of racist and bigoted remarks.

"Today, the New York Times is suggesting that I am an advocate for white nationalism and white supremacy," King said in a statement. "I want to make one thing abundantly clear; I reject those labels and the evil ideology that they define. Further, I condemn anyone that supports this evil and bigoted ideology which saw in its ultimate expression the systematic murder of 6 million innocent Jewish lives."

King is referring to these remarks published in the lengthy interview the Times ran Thursday:

“White nationalist, white supremacist, Western civilization — how did that language become offensive?” Mr. King said. “Why did I sit in classes teaching me about the merits of our history and our civilization?”

In his statement Congressman King did not deny making the offensive remarks in which he asked when white nationalism and white supremacism had become offensive.

And he wasn't done trying to cover up his racist past. Instead, in his press release King actually compared himself to the Founding Fathers.

"It’s true that like the Founding Fathers I am an advocate for Western Civilization’s values, and that I profoundly believe that America is the greatest tangible expression of these ideals the World has ever seen," he wrote. "Under any fair political definition, I am simply a Nationalist. America’s values are expressed in our founding documents, they are attainable by everyone and we take pride that people of all races, religions, and creeds from around the globe aspire to achieve them. I am dedicated to keeping America this way."

That's false. King has a long record of making racist and bigoted remarks.

"This conviction does not make me a white nationalist or a white supremacist. Once again, I reject those labels and the ideology that they define. As I told the New York Times, ‘it’s not about race; it’s never been about race.’ One of my most strongly held beliefs is that we are all created in God’s image and that human life is sacred in all its forms."

Despite his pleas and denials, Rep. King, possibly for the first time in his nearly two-decade tenure as a House Republican, is getting some push back from (a handful of) Republicans.

These comments are abhorrent and racist and should have no place in our national discourse. Steve King asks how… https://t.co/Ut6RSo9Cn4
— Liz Cheney (@Liz Cheney) 1547146732.0