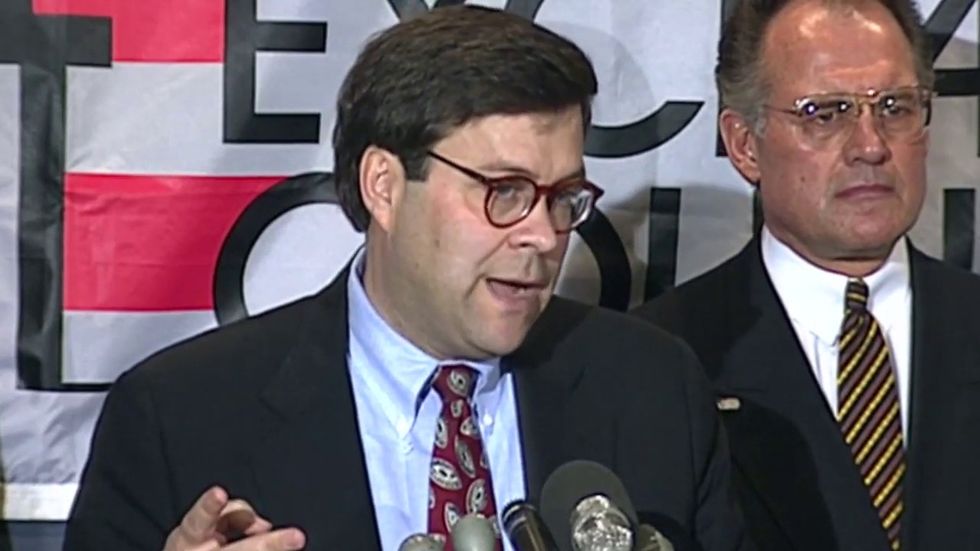 “I started off in Washington at the Central Intelligence Agency and went to law school at night while I was working at CIA,” recalled William Barr in a 2001 oral history for the University of Virginia.

Trump’s nominee to be attorney general has what Trump might call “deep state” credentials. Barr came to Langley in 1973. He was a 23-year-old graduate of Columbia with a master’s in political science and Chinese studies. His resume shows he toiled at the CIA by day and attended George Washington University law school at night. The Watergate scandal was ravaging the agency’s reputation and destroying the presidency of Richard Nixon.

Barr spent four formative years in the Intelligence Directorate and the Office of Legislative Counsel. He even made the acquaintance of CIA director George H.W. Bush. In 1977 Barr moved on to a prestigious clerkship for a federal judge and then a series of jobs in private practice and the Justice Department. In 1991, Bush, now president, appointed Barr to be attorney general.

At age 41, Barr was one of the youngest men ever to hold that office. He left after one year and went on to a long career in corporate law and public service. Barr now returns to his old job at the behest of besieged President Trump.

Barr’s confirmation hearings open this week amid questions about the legality of the president’s conduct toward Russian state agents and FBI investigators.

Will Barr protect the investigation of Special Prosecutor Robert Mueller? Or will he act on a tightly argued memo in which he claimed Mueller has already exceeded his authority?

In his first turn as attorney general in 1991, Barr handled three legal issues of deep concern to the CIA. He helped resolve all three issues favorably for the agency’s leaders and the president. Barr’s decisions were unfavorable to law enforcement, Congress, and the voters.

The first deep state fiasco handled by Attorney General Barr was the mother of all scandals, known by the sibilant initials, BCCI.

The Bank of Credit and Commerce International was a global institution, which deputy CIA director Robert Gates described, slightly more accurately, as “the Bank of Crooks and Criminals.” David Ignatius dubbed it “The Bank of Fear.”

BCCI was a shadowy but very real institution with connections to governments and intelligence services all over the world. BCCI’s owners specialized in evading regulators so that they could speculate and bribe with the depositors’ money. As the fraud mounted and spread, law enforcement officials and bank regulators the world over discovered what the CIA had been trying to hide.

Senate investigators, led by John Kerry, found the agency had numerous BCCI accounts. Kamal Adham, the former chief of Saudi intelligence and a CIA collaborator, played a leading role in the bank’s dealings.

The final report of the Kerry Committee captures the mind-boggling scale of BCCI’s corruption. It was the kind of true story that makes people believe there is a “deep state.”

In 1991, federal prosecutors in Tampa launched an investigation of money laundering at BCCI. The District Attorney of Manhattan investigated a broad array of bank activities and found itself getting zero cooperation from colleagues in the Justice Department and CIA. Barr sat on the influential deputies committee of the National Security Council, which controlled the paperwork.

Barr was up for confirmation as attorney general. Moscow said he heard that Democrats on the Judiciary Committee made Barr promise to let the BCCI investigation go ahead.

“We didn’t have a problem once Barr was in there,” Moscow said. “We got cooperation. We prosecuted seventeen people here in New York. Of course, the biggest guys got away.”

Several of the BCCI ringleaders were indicted, but they got away. Barr did not press Pakistan for their extradition, nor did his successors in the Clinton administration.

Barr played a more direct role in sidelining an investigation into an Italian bank that the CIA used to funnel aid to Iraqi dictator Saddam Hussein. The scandal was known, briefly, as Iraq-gate.

The backdrop was the geopolitics of the horrific war between Iran and Iraq in 1980-88, which killed millions. In the interests of harming Iran, President Bush authorized a program of covert support for Iraq, including the provision of targeting intelligence and commercial loan guarantees. The latter were made via the Atlanta branch of the Banco Nazionale del Lavoro (BNL).

The story was politically potent because Iraqi leader Saddam Hussein had just invaded Kuwait in August 1990. President Bush had to raise an international military coalition to drive him out.

The Iraq-gate story illustrated how, once again, a U.S. covert operation had backfired. The Iraqi dictator had been emboldened by the covert support of the CIA to launch a war on a weaker American ally.

“Were the intelligence services of the U.S., Britain and Italy all aware of—and participants in—the West’s secret, unlawful arming of Saddam?” asked New York Times columnist William Safire. “Of course; but the stonewalling strategy of the departing Justice politicians is to have the C.I.A. take the gaspipe for all the wrongdoers.”

One of those “departing Justice politicians” was Barr. He made sure CIA did not “take the gaspipe,” i.e., commit suicide. Under pressure to appoint a special prosecutor to investigate, Barr slyly appointed a special examiner, a magistrate with much less time and money. A retired judge conducted a cursory investigation and absolved both the CIA and Justice Department of wrongdoing.

Incoming president Bill Clinton was not interested in investigating the CIA, and the BNL case was forgotten.

Barr later dismissed the Iraq-gate allegations as “nonsense.” But there was no doubt Hussein had received billions of dollars’ worth of loan guarantees via the U.S. branch of BNL. How that happened was never determined.

Barr, more than anyone, made sure the Iraq-gate scheme was not fully investigated.

With President Trump reserving the possibility that he might pardon former aides indicted by Mueller, Barr’s handling of the Iran-Contra pardons of 1992 is revealing.

President Bush had been defeated for reelection; Barr urged Bush to use his pardon power freely before leaving office. Like Trump today, Bush was under investigation by a special prosecutor, Judge Lawrence Walsh, for his role in the Iran-Contra conspiracy.

Also under investigation were former defense secretary Caspar Weinberger and two top CIA officials, Clair George and Dewey Clarridge. They had all plotted to evade a congressional ban on aid to the counterrevolutionaries in Central America by illegally selling weapons to Iran.

The CIA was in real danger. The trials of George and Clarridge promised to be a public relations nightmare or worse. Sen. Pat Moynihan, chairman of the Senate Intelligence Committee, had introduced a bill to abolish the clandestine service. The Cold War was coming to an end, and the agency’s future was in doubt.

In his oral history, Barr says he urged Bush to pardon the CIA men on the grounds that they were victims of the “criminalization” of foreign policy. When it came to pardon power, Barr said he “favored the broadest” use.

“There were some people arguing just for Weinberger, and I said, ‘No, in for a penny, in for a pound.’”

Bush took his advice. Barr had no respect for the special prosecutor’s work and no regrets about consigning it to history. Walsh accused Bush of hiding criminal misconduct, but the former president and aides escaped justice.

In all three cover-ups, Barr sacrificed the interests of transparency and accountability to the political needs of Langley and the White House.

Can President Trump count on the same if Barr is confirmed? Yes, he almost certainly can.