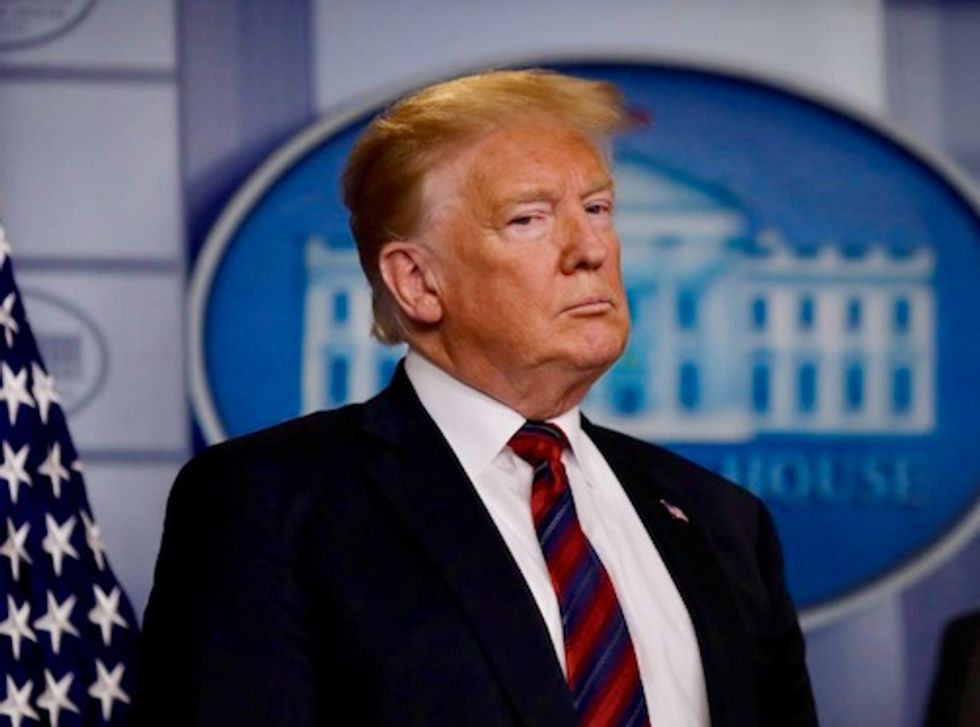 On Thursday, a Democratic majority was sworn into Congress. The newly elected progressive lawmakers made their intentions clear.

“When your son looks at you and says, ‘Momma look, you won, bullies don’t win,’ and I said ‘Baby they don’t,’ because we’re going to go in there and we’re gonna impeach the motherf----er,” Rashida Tlaib said at a party Thursday night.

Yale Psychiatry Professor Bandy X. Lee has long argued that Trump's behavior is pathological—and that the more that he feels his power threatened, the more likely he is to lash out in ways harmful to himself, the country and the world (her views do not reflect Yale policy).

Raw Story spoke with Lee about how Trump is likely to react to pressure from Democrats, the Mueller probe and other investigations into the Trump campaign and administration.

Tana Ganeva: A Democratic majority was just sworn into Congress and they have made it clear they aim to investigate the many scandals, ethics breaches and possible crimes plaguing the Trump administration. Are you concerned about how he'll react?

Bandy X. Lee: Yes, very. We know from Donald Trump’s past actions when he has come under criticism that there is great reason to be concerned about how he will react to an incoming Democratic House ready to put checks on him. We know from his frequent tweets that reference his own inflated self-image and retaliate against those who challenge it that this will be the pattern of his response. A study found that his Twitter usage widely instigates hate crimes, and Mr. Trump’s vengeful words against those in the House could further contribute to a culture of division and violence in the United States.

ABC News reported 17 court cases that traced defendants’ violence, threats or alleged assaults directly to Mr. Trump. The greater the pressure, the more his mental challenges will cause him to take unpredictable and potentially extreme and dangerous actions as president, and as long as he is in his office, he of course has a lot of power to do damage. There should no longer be any doubt about this propensity, and lawmakers and the public should not take it lightly, either.

Tana Ganeva: What is the best way for Democrats to perform their oversight duties without triggering a dangerous meltdown?

Bandy X. Lee: The severity of Mr. Trump’s impairment warrants an evaluation—I do not believe there is any way around it, unless we wish to gamble with the nation’s security and, realistically, the future of humankind itself. The evaluation would offer precision around the level of dangerousness we are dealing with, the least restrictive means of managing him, and his likely future course—and of course what everyone wants, which is a diagnosis.

At the bare minimum, we should do a capacity evaluation by appropriate, independent specialists, which would determine his ability to function or not in his office, and this evaluation does not require consent. This is of course a very uncomfortable situation, but even the president has the right to treatment by law, and the nature of mental pathology is that the sicker one is, the less likely one is to recognize that anything is wrong and will avoid testing and treatment at all cost.

Not to apply the correct treatment—which is containment and an urgent evaluation—is to enable the illness, and there is no good ending to this. Oversight is fine, but to believe that we can simply proceed with the normal course of investigations without responding to the medical need is irresponsible in the lack of understanding of what level of crisis we are facing. Neither is it humane to Mr. Trump at this time; criminal responsibility is important, and he has not shown any condition that would exonerate him, but we must address first things first in an emergency.

Tana Ganeva:  The past month has seen the administration roiled in controversy, from a government shutdown to the resignation of James Mattis. In what ways have Trump's unique pathologies played into the chaos?

His dangers are no longer probable but demonstrable: his attraction to cruel and violent policies; his effectiveness in inciting violence; his stripping of moderating forces; his pursuit of a position of power without appropriate qualifications; and his shaping of the national and international culture after his own mental state—all fit the pattern of well-known, dangerous personality structures.

Since there is no rational strategy underneath it all, granting him what he wishes was bound to cause him to deteriorate and to cause devastation to the nation—we have not yet seen the end. That is why mental health professionals have been warning against this presidency as a part of our societal responsibility.

In The Dangerous Case of Donald Trump, 27 psychiatrists and mental health experts have warned that his condition was more serious than people assumed, that it would grow worse with actual power, and that he would eventually become uncontainable.

The situation is very serious now, and there is a risk of everything from a nuclear war to a civil insurrection to his accidentally triggering something catastrophic—be it in Syria, North Korea, China, or Russia. As difficult as it may be to intervene now, it will only grow more difficult with time, and there is no other proper management than containment, removal from access to weapons and power, and an urgent evaluation, as we have been saying for almost two years.

Tana Ganeva: President Trump's approval ratings continue to be high among Republican voters and the Republican leadership is largely silent. How do you explain continued loyalty to the President?

Bandy X. Lee: Again, this is the expected course when we are dealing with mental pathology. Studies have shown that “leaders” with actual pathology are more effective in beguiling the public—and perhaps lawmakers, too, although we might have expected better of them—not less.

For example, a truly paranoid person is more likely to whip up frenzy, and hence garner irrational support, among his followers than a rational person who is simply employing the same methods as a strategy. With the sick person, you will see two camps over time: the healthier portion of the population, which becomes exhausted, inured, and increasingly hopeless; and the less healthy portion, which becomes more and more taken but less and less in touch with reality.

The overall effect is what we call “shared psychosis”: the population starts taking on the same symptoms as the person who is ill. The portion that “desires” Mr. Trump’s presidency may seem as if they are getting what they want, but the longer he stays, the more deleterious his effects will be, finally driving himself and them to destruction.

The destructiveness is what distinguishes pathology from true, healthy choices, and the importance of distinguishing between the two is why I believe mental health professionals need to speak up, even if it is unpopular or sounds hyperbolic at first. The only way out of the danger now is to remove him or his influence. The way to avoid this predicament in the future is to require all presidential and vice-presidential candidates to take a fitness for duty exam before they assume office, just as all military officers are required to do before assuming their duty.

Tana Ganeva: This week, Mitt Romney spoke up against the President, citing his lack of character. How do you think Trump perceived and reacted to this slight? Does it create a pattern for future Republican opposition to the President?

Bandy X. Lee: As expected, Trump turned to Twitter to release a retaliatory counter-attack where he unsurprisingly also brought the focus back to himself by saying: “I won big, and he didn’t.” This only reveals how rigid and poor his coping mechanisms are, and forebodes danger for our country.

We may remember a year ago when he tweeted that his nuclear button is “bigger and more powerful” than Kim Jong-un’s, in response to the feeling that the latter was challenging him. This created such an emergency situation that South Korea swiftly intervened in unprecedented ways and fortunately blocked an escalation that could have triggered a war, but given Mr. Trump’s proneness for violence, we can return to that level of danger at any time. Mr. Romney’s public criticisms of Trump may represent growing dissent in the Republican Party, which might make a bipartisan intervention more likely, which would be great—but there is not much time.

Tana Ganeva: Your experience leads you to believe that Trump exhibits thoughts and behaviors that suggest he's mentally impaired. What initially led you to that conclusion? What are the recent events that have confirmed your diagnosis?

Bandy X. Lee: It is difficult to communicate everything, but let me just say, over my 20-year career devoted to studying, predicting, and preventing violence, I have seen close to 1000 individuals with Mr. Trump personality profile. Some of these signs include behavior that is consistent with paranoia, a lack of empathy, impulsivity, an inability to consider consequences, and an attraction to violence and cruelty.

His inability to be grounded in reality shows that his condition is rather severe. He lies at a pathological level, has difficulty tolerating democratic institutions and the free press, not to mention his own intelligence communities, and is incapable of listening to expert advice, let alone opposing viewpoints.

A most recent example is the government shutdown over border wall funding, with Mr. Trump claiming that it will go on for “as long as it takes” until he gets the $5 billion dollars he is demanding. The real situation does not matter to him, and he will insist for erratic reasons—although “madness” has its own method—even if it hurts him.

Indeed, he will become increasingly self-destructive, as well as damaging to the country, the more his condition worsens. To be clear, I am not making a diagnosis, which usually requires a personal interview as well as a whole host of other information, but am assessing dangerousness, for which a personal interview is not always necessary or helpful (since dangerous individuals will try to hide the very things you need to know).