Here are the 5 biggest right-wing outrages of the week: Did the State of the Union have any impact? 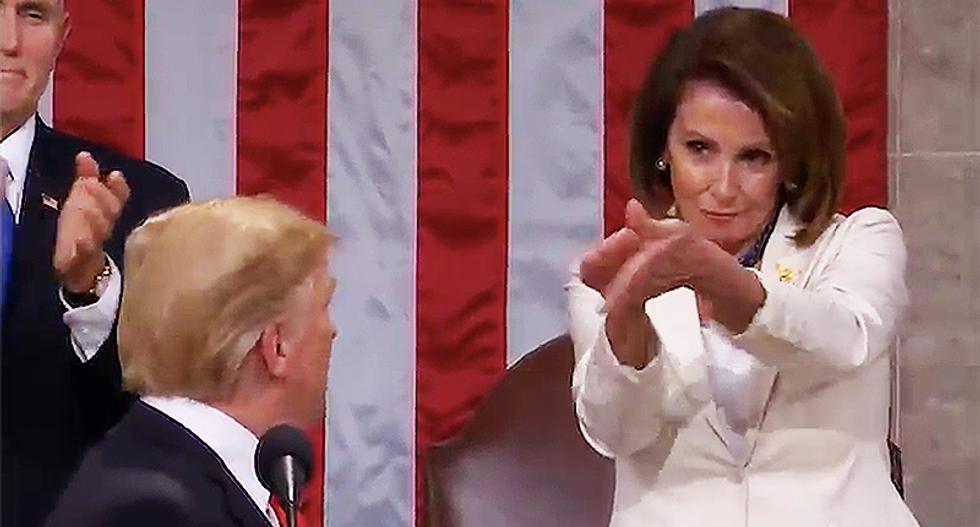 On Tuesday, President Donald Trump delivered his second State of the Union address, in which he doubled down on attacking immigration while simultaneously wrapping his speech in a flimsy call to bipartisanship.

It is unclear whether the speech had a huge impact on the public consciousness, however, because it was eclipsed by a chaotic week that saw multiple top Virginia politicians in both parties caught up in a blackface scandal, the unveiling of Democrats’ opening resolution for a “Green New Deal,” and billionaire Amazon founder Jeff Bezos accusing the National Enquirer’s David Pecker of blackmailing him with pictures of his genitals. In this environment, it is hard for any one politician to stick out for egregious behavior — but many made a sincere effort.

Racism against Hispanics has become so casual and commonplace in the GOP that it is almost a given. But on Tuesday, right-wing economist Peter Morici’s attack on progressive Rep. Alexandria Ocasio-Cortez (D-NY) was not subtle even by Trump-era standards.

“This is a party that no longer believes in core American values,” said Morici on Fox Business’ Varney & Co., in a segment attacking the Green New Deal. “And it also shows us what’s going on with immigration. Basically what you have in Ocasio-Cortez are Latin American values. Instead of us assimilating them, they are assimilating us. And they want to bring the kind of socialism that destroyed Venezuela, and frankly Mexico, here. You know, it isn’t that we’re going to become Venezuela, but we could easily become Mexico, and you won’t be able to go outside your door without getting shot.”

This attack on Ocasio-Cortez, who was born in the Bronx but is of Puerto Rican descent, is not only offensive, it’s stupid. Ocasio-Cortez’s ideas for progressive taxation and clean energy public works are not remotely the same thing as the dictatorship in Venezuela, which is a low-tax state that runs its economy on a centrally-planned oil industry. Nonetheless, “Venezuela” seems to be fast becoming a catch-all dog whistle for any policy that Republicans don’t like.

Republicans are pushing back aggressively as the major Democratic presidential candidates embrace “Medicare for All” — the popular term for a single-payer health insurance policy that would cover every American. But they might want to try using a different argument than the one put forward by Duck Dynasty star Phil Robertson in conversation with Fox Business’ Neil Cavuto on Tuesday.

“America has lost touch with God and his simple values. Instead, socialist rhetoric, including ‘Medicare for All’ is being touted by liberal 2020 candidates,” said Robertson. “I already have healthcare. It’s given to me by God — eternal healthcare … it’s free!”

It is worth noting that Robertson has a net worth of $15 million. So whether or not he sincerely believes in faith healing, he will never have to risk the financial ruin of unpaid medical debt, something that 41 percent of working-age adults have.

At the State of the Union address, a number of Democratic women came to the event dressed in white, to honor 100 years since the passage of the 19th Amendment granting women the right to vote. It was an inspiring display commemorating American progress, that even Trump himself acknowledged in his speech to bipartisan applause.

But Katrina Pierson, the Trump campaign’s former spokeswoman, saw something a lot more sinister in the white garb — and tweeted as such on Tuesday night:

The only thing that the Democrats uniform was missing tonight is the matching hood.
— Katrina Pierson (@Katrina Pierson) 1549431521.0

It takes a special kind of ignorance and depravity to compare women celebrating their equal rights in participatory democracy to the nation’s most infamous white supremacist terror group. Especially since, insofar as there was any organized presence of the Ku Klux Klan in the 2016 presidential election, they backed her boss.

On Wednesday, with Democrats back in control of the majority, the House Judiciary Committee held its first hearing on gun violence in eight years, to discuss H.R. 8, a new universal background-check bill, with many families of gun violence victims present. But Rep. Matt Gaetz (R-FL) thought the whole thing a waste of time.

“As we hear the stories and circumstances for those here, I hope we do not forget the pain and anguish and sense of loss felt by those all over the country who have been the victims of violence at the hands of illegal aliens,” he said. “H.R. 8 would not have stopped many of the circumstances I raised. But a wall, a barrier on the southern border may have.”

His comments angered Fred Guttenberg and Manuel Oliver, parents of the Parkland school shooting victims in attendance, who promptly started shouting at him. In response, Gaetz pointed at them and demanded to know if they could be ejected from the hearing.

There is absolutely no evidence that border walls reduce crime — when one was erected in El Paso, the city’s crime rate did not go down. Moreover, studies show immigrant populations are less, not more, crime-prone than the native-born citizen population.

On Thursday night, the Supreme Court blocked Louisiana from enforcing a law requiring abortion clinics to obtain admitting privileges at a local hospital. The law, which has been on hold since 2014, is identical to the one in Texas that the court ruled an undue burden to abortion rights in Whole Woman’s Health v. Hellerstedt three years ago, but it wasn’t clear if they would rule the same way this time, as Justice Anthony Kennedy has retired and the more partisan Justices Neil Gorsuch and Brett Kavanaugh have moved in. But Chief Justice John Roberts, despite dissenting in Whole Woman’s Health, honored precedent and sided with the liberals to protect abortion rights — for now.

Right-wing Christian radio host Bryan Fischer was outraged about the decision, and soon took to Twitter to denounce Roberts: 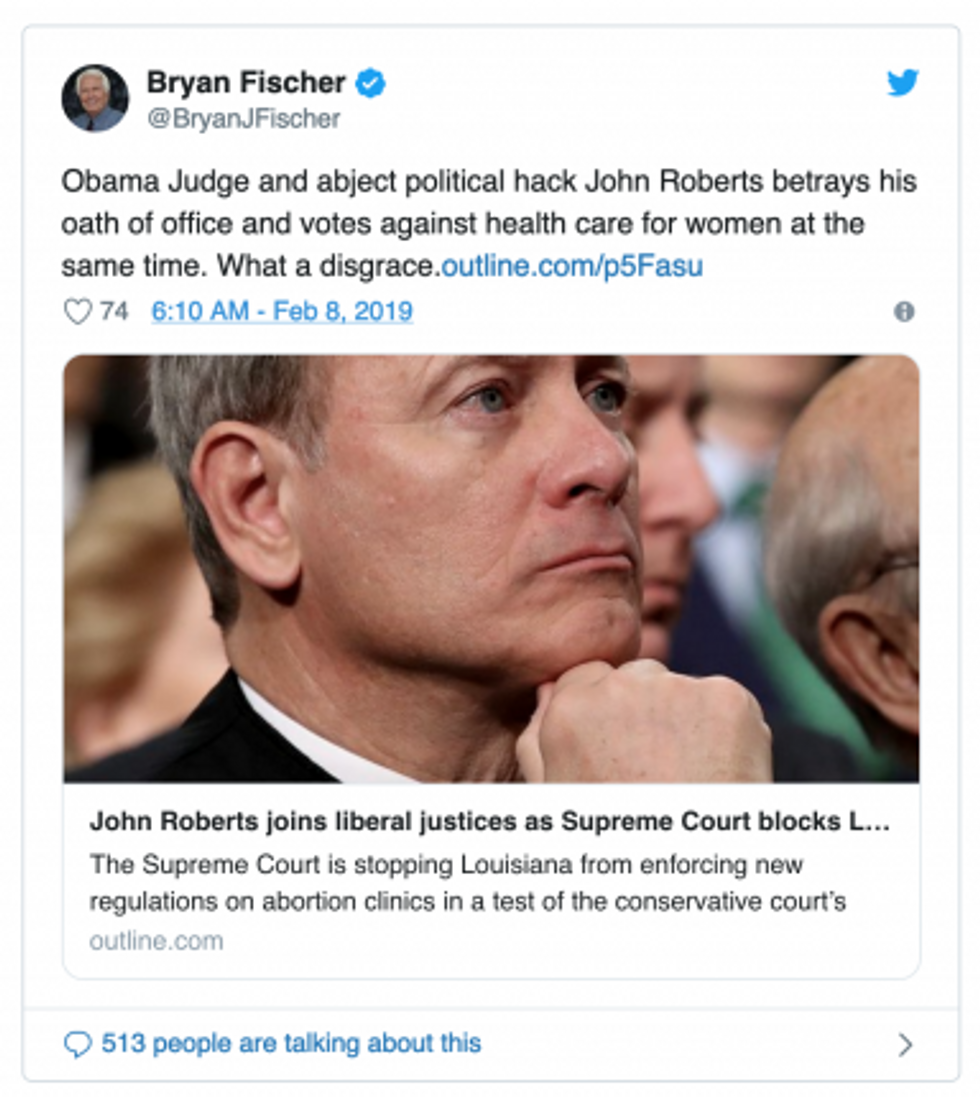 Anyone with an even tangential knowledge of the Supreme Court knows that Roberts was appointed by President George W. Bush. Additionally, at the time, Barack Obama was a senator — who voted against confirming Roberts.