Here are the 5 biggest right-wing outrages of the week: A week of distractions as Democrats lay the groundwork for 2020 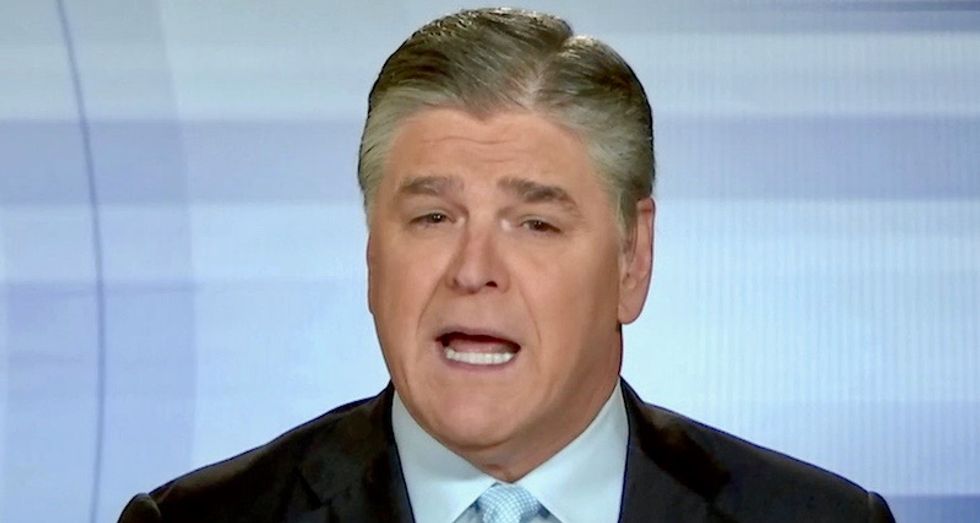 After President Donald Trump’s humiliating previous week, which ended with surrender in the government shutdown fight and the arrest of his longtime campaign adviser Roger Stone, this week has seen a chaotic mess of distractions. Republicans have been trying to turn Stone’s arrest into a police brutality scandal. Meanwhile, the media has been led around on a leash by the bizarre third-party candidacy of former Starbucks CEO Howard Schultz, which may be about to end before it begins.

Democrats, through all this, have been steadily and diligently laying the groundwork for 2020. Sen. Kamala Harris (D-CA) held a town hall on her presidential candidacy. Sen. Cory Booker (D-NJ) declared his own. And in the House, Democrats are advancing H.R. 1 to showcase their agenda of electoral and ethics reform.

Here are five of the craziest right-wing moments of the week:

Fox News commentator Sean Hannity is known as an epic master of whataboutism — he spends a good portion of his time on TV and radio defending Republican wrongdoing by trying to prove some Democrat did the same, or worse. But his defense of Roger Stone on his Monday radio show is truly a masterpiece.

“If we’re looking for crimes and people that lie to Congress or people that obstruct justice … when is the raid of Eric Holder?” said Hannity. “He has a long history of lying to Congress. You know he lied to Congress under oath about what he knew about targeting reporters, fast and furious, as early as the New Black Panther case.”

Hannity notably can’t name any specific thing that Holder lied about to Congress in those issues while serving as attorney general. Possibly because he didn’t. Republicans did push through a bogus, partisan contempt of Congress citation of Holder in 2012 related to document requests on ATF gunwalking, but that’s not the same thing as lying to Congress.

Sean Hannity was not the only commentator on Fox News with a hot take on the Stone arrest. Another strange one came from Michael Caputo, a Republican strategist and former associate of Stone’s who was previously investigated as part of the Russia probe.

“At any time, you can get a knock on your door, and 29 men will come with automatic weapons — which, by the way, is not only more than they sent to go after bin Laden. It’s 29 more men than they sent to Benghazi to pick up and defend our own men,” he thundered.

For years, Republicans have falsely claimed that President Barack Obama’s administration never sent help to Americans trapped in the Benghazi consulate during the 2012 attack. In fact, the Defense Department, deployed forces immediately, and when it became clear they were too far away to reach the city in time, the CIA and local militias worked to evacuate Americans to Tripoli.

Incidentally, the force and tactics used in the arrest of Stone were completely normal for a federal suspect deemed to be a flight risk.

It would be hard to find a bigger source of embarrassment for the Arizona Republican Party than state Rep. David Stringer. But apparently he is not a big enough embarrassment to merit expulsion from the state House.

Last year, Stringer faced outrage after his reported comments that African-Americans “don’t fit in,” and that integrating schools is impossible because there aren’t “enough white kids to go around.” But as if that weren’t enough, criminal records unearthed by the Phoenix New Times revealed Stringer was indicted in Maryland in 1983 on five sex offenses, including child pornography, found guilty of three, and sentenced to probation and psychiatric treatment. The details are unknown because his record was expunged as part of a deal.

After all of that, though, and even though GOP Gov. Doug Ducey has called on him to resign, Republicans have defeated an effort to expel Stringer, with House Majority Leader Warren Petersen claiming that “We have a process, a process that I’m sure everybody in this room would like to be treated the same way with.” He will still be subject to an Ethics Committee hearing.

4. Several right-wing pundits have no idea how renewable energy works.

As the Midwest was plunged into a record deep freeze caused by the unseasonably warm Arctic waters breaking the polar vortex that keeps cold air at high latitudes, right-wing “Gateway Pundit” blogger Jim Hoft had these words to say:

Incredibly, he wasn’t the only one to have a take like this. On Fox News, Jesse Watters and Tucker Carlson took a similar line.

Neither photovoltaic solar power nor wind power has anything to do with the temperature outside. If anything, solar panels work slightly more efficiently in cold weather.

Rep. Alexandria Ocasio-Cortez (D-NY) has repeatedly drawn the GOP’s ire, due to her unapologetically left-wing agenda, her young age, and her ability to dispatch critics on social media. On Thursday, Fox News host Tomi Lahren had some choice words to add to the pile-on.

There is, of course, rather a natural retort to such a comment: Ocasio-Cortez is a member of the U.S. House of Representatives, and Lahren is not. But whether Republicans consider that to be “real life” is certainly a matter of debate.