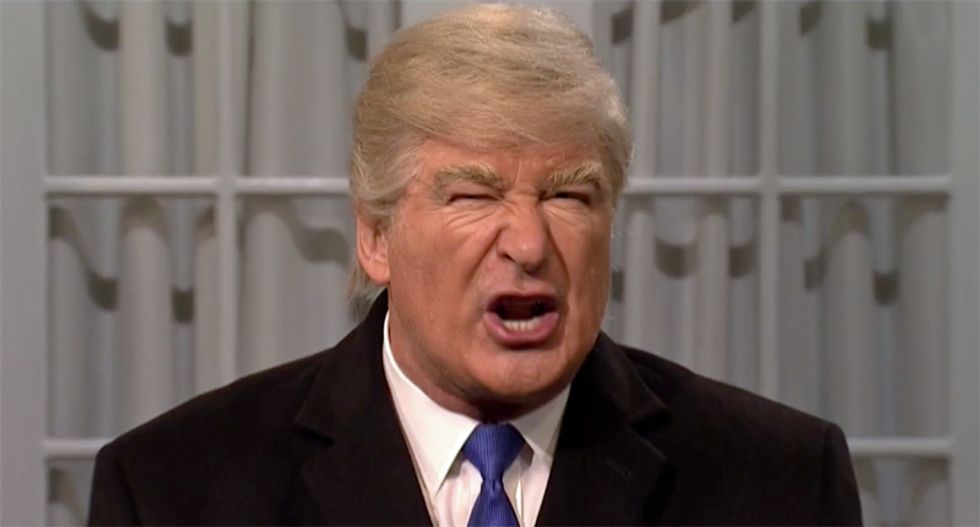 SEE ALSO: Trump melts down on Twitter over latest SNL portrayal in freak out over ‘Fake News NBC!’

"I'm here to declare a very urgent, important national emergency," he began. "This is a big one, so I don't want to waste any time. That's why first I would like to blow my own horn a little bit. I had a great health exam, I'm still standing 6'7", 185 pounds -- shredded!"

"Let's cut to the chase, folks. We need wall. Okay? We have a tremendous amount of drugs flowing into the country from the southern border -- or the brown line as many people have asked me not to call it," he continued.

"That's why we need wall. Because wall works. Wall makes safe," he argued. "You are not having to be smart to understand. In fact, it's easier to understand if you are not that smart."

"You can see why I have to fake this national emergency, right? I have to, because I want to. It's really simple," he explained.

Baldwin went on to mock Trump's bigotry by showing the commander-in-chief do multiple impersonations of minorities.

The segment showed Trump taking questions from journalists, but not NBC, because "they suck."

"Oh, seriously, man, how do you keep getting in this room? I would love to build a wall around Jim," he replied.

"Those numbers are faker than this emergency," Trump replied.

"This is a total emergency, a five-alarm blaze and I need to go to Mar-a-Lago to play some golf -- and live from New York, it's Saturday night!"