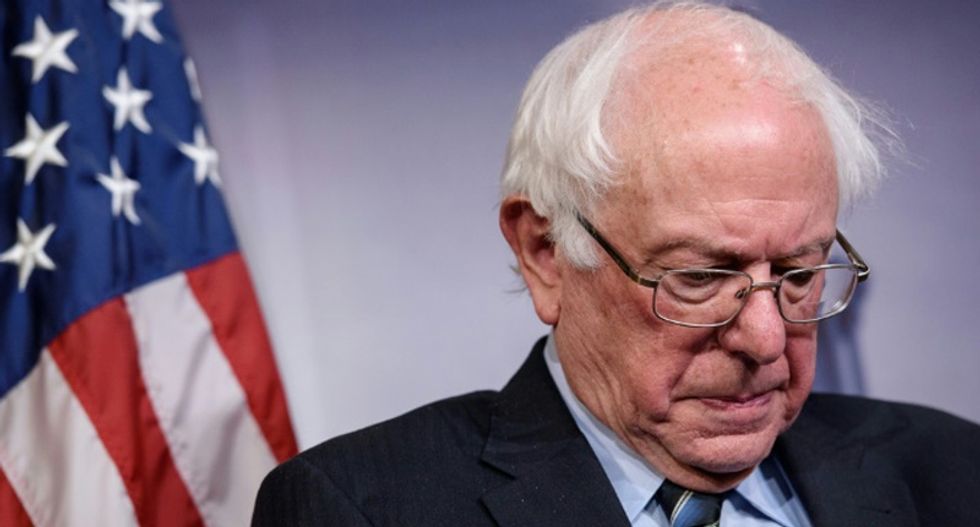 Senator Bernie Sanders has been rattled by accusations from several women on his 2016 presidential campaign that they were harassed or mistreated by campaign staff. (AFP/File / MANDEL NGAN)

So far, Sen. Bernie Sanders' second potential presidential run has not taken off the in the way that his supporters might have hoped.

This isn't to say that the Vermont senator is doing badly in the polls, per se. A Monmouth University poll taken late last month found him in a distant second with 16 percent, trailing former Vice President Joe Biden's 29 percent but ahead of Sens. Kamala Harris of California and Elizabeth Warren of Massachusetts (at 11 and 8 percent, respectively). An ABC News/Washington Post poll from around the same time found him placing third, behind Biden's 9 percent and Harris' 8 percent but ahead of Texas Rep. Beto O'Rourke's 3 percent (it's worth noting that this same survey found President Donald Trump with 4 percent of the vote and 43 percent marked as "Unsure").

Perhaps most notable, however, was the Daily Kos Presidential Straw Poll, a survey that has traditionally served as a fantastic bellwether of who liberals support within the Democratic Party. When those results came out last month, Warren stood ahead with 22 percent, followed by O'Rourke with 15 percent, Harris with 14 percent, Biden at 14 percent and Sanders following behind at 11 percent.

It's easy to forget that his success in the 2016 Democratic primaries had as much to do with the perceived absence of any viable progressive alternative to frontrunner Hillary Clinton as it did with Sanders' distinctly pugnacious and idealistic brand of charisma. Because many liberals were dissatisfied with Clinton's record — in particular, her association with the comparatively more conservative policies touted by her husband, former President Bill Clinton, during the 1990s — Sanders unapologetic brand of left-wing politics wasn't just refreshing; it was, to true-blue liberals, an oasis in a desert.

Yet now that the 2020 cycle has rolled around, a number of Democrats are moving much closer to Sanders' version of leftism than would have been conceivable during the 2016 cycle. This is perhaps most evident in Sanders' support of Medicare for All. While his fellow Democrats haven't gone so far as to endorse his precise policy proposals, major candidates like Warren, Harris, O'Rourke and Sen. Cory Booker have offered at least rhetoric support for the concept. This reflects a growing awareness that the outspoken liberal wing of the Democratic Party cannot be taken for granted. Even if one questions the sincerity of some of these Democrats in their stance on that or other core progressive issues, all of them know that if they promise to deliver Sandersian policies as president and then fail to deliver, their party base will take them to task.

Another major takeaway from Sanders' decline is that Democrats are more sensitive to the need for a diverse electoral coalition. The party's problem hasn't been that women and voters of color haven't preferred them over Republicans, but rather that their support has been taken for granted. That's why it should encourage progressives to hear that Sanders caught flak for offering a State of the Union response that could have taken attention away from Stacey Abrams, an African American woman who was almost certainly robbed of the Georgia governorship in November. This demonstrates that the Democratic Party recognizes the importance of diversity to its brand, not just as a way of attracting swing voters but of also energizing voters who have too often felt that no one running for office shares their background or directly represents them.

Finally, the Sanders decline could be welcome for the party if it foreshadows an opportunity for progressives who share Sanders' values to select a candidate who doesn't alienate the party's more moderate elements. This is not an easy feat to pull off, but the fact that moderates like Biden and O'Rourke have done so well in the early polls reveals that a substantial number of Democrats are center-left rather than staunchly liberal. These are people who ultimately share the humanitarian values of Sanders and his backers but — whether one agrees with them or not — have concerns about the viability or desirability of his approach that aren't going to simply vanish. Indeed, as CNN's Chris Cillizza noted about Sanders' State of the Union response, part of the problem was that it made Sanders seem like a man separate from the Democratic Party rather than a potential leader of it.

None of this means that Sanders won't get the nomination or win the election. Plenty of future presidents fared as well as or worse than Sanders currently does in the polls at this point in their election cycles, and the worst scandals from the Sanders-verse have not touched him personally (the sexual harassment that occurred during his campaign being the foremost example). What it demonstrates is that, quite simply, the fact that Sanders isn't doing better in the polls merely demonstrates that his message has become more popular in the party while the potential weaknesses of his candidacy are being potentially addressed. For anyone who wants a Democratic president to take office in 2021, these are welcome developments.