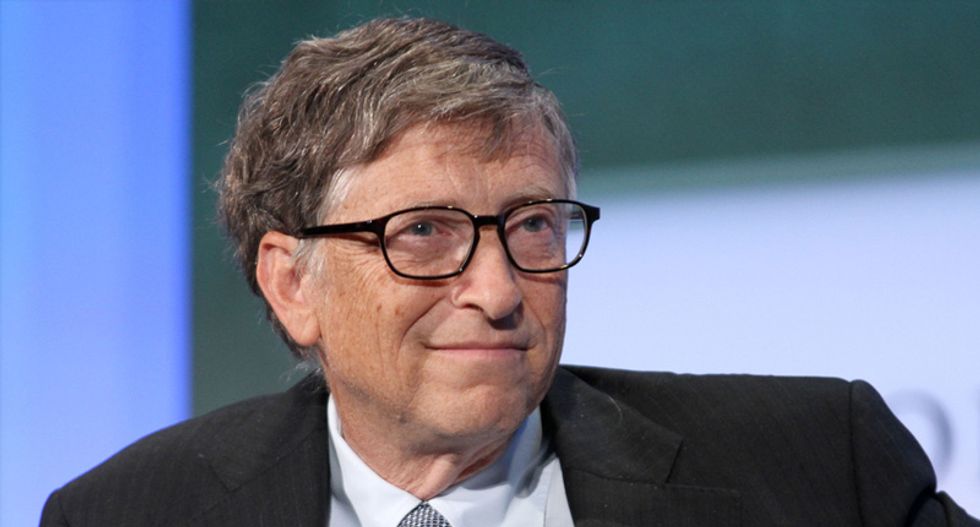 Anthropologist and author Jason Hickel swiftly disabused readers of a narrative offered by Microsoft founder Bill Gates this week, rejecting the billionaire's statement on Twitter that "people underestimate just how much life has improved over the last two centuries."

The idea that the free-market capitalism has grown while solving the crisis of extreme poverty around the world may be tempting for some to embrace, Hickel wrote in the Guardian—but it is "completely wrong."

Ahead of his appearance at the World Economic Forum's annual meeting in Davos, Switzerland, Gates shared an infographic on Twitter claiming to show that extreme global poverty has plummeted since 1820, with 94 percent living in poverty 200 years ago compared with just 10 percent today.

This is one of my favorite infographics. A lot of people underestimate just how much life has improved over the las… https://t.co/NAKJypSzKM
— Bill Gates (@Bill Gates)1547915535.0

The global population as a whole hasn't gained more wealth in the last 200 years, he wrote—instead, "the world went from a situation where most of humanity had no need of money at all to one where today most of humanity struggles to survive on extremely small amounts of money," with much of the world having endured "a process of dispossession that bulldozed people into the capitalist labor system."

As European colonizers invaded the global south, Hickel added, millions lost control of their land and were forced "into European-owned mines, factories, and plantations, where they were paid paltry wages for work they never wanted to do in the first place"—all for the benefit of the rich.

Roser and Gates also promote what Hickel sees as an unrealistic view of true poverty, basing the infographic on an understanding of the global poverty line as living on $1.90 per day.

This poverty line is "obscenely low by any standard, and we now have piles of evidence that people living just above this line have terrible levels of malnutrition and mortality," wrote Hickel, leading many economists to recommend a poverty line of at least $7.40 per day.

On Twitter, Hickel suggested Gates would likely show less enthusiasm for the number of people subsisting on $1.90 per day if he had experienced such poverty in today's economy—or anything close to it—himself.

Hickel's analysis is far more in line with recent findings on poverty than the graphic shared by Gates and developed by Max Roser of Our World in Data. In recent months U.N. Special Rapporteur on Extreme Poverty Philip Alston has found that even in wealthy countries like the U.S. and Great Britain, "punitive" neoliberal policies have driven rising income inequality and pushed the poor to near "ruination."

Still, the notion that poverty levels have plummeted under free-market capitalism—the same economic system which has allowed just 26 billionaires to amass as much wealth as the 3.8 billion poorest people in the world—has also been promoted by other wealthy frequent Davos attendees including the musician Bono and author Steven Pinker. On Twitter, Hickel accused Bono of latching on to a convenient theory for those who have benefited immensely from capitalism while much of the world is left behind.

Ummm... no. What you really mean is that capitalism has given you more wealth than any other political philosophy.… https://t.co/F5LjHn6v3a
— Jason Hickel (@Jason Hickel)1548413338.0

"Our world is richer than ever before, but virtually all of it is being captured by a small elite," Hickel wrote. "Only five percent of all new income from global growth trickles down to the poorest 60 percent—and yet they are the people who produce most of the food and goods that the world consumes, toiling away in those factories, plantations and mines to which they were condemned 200 years ago. It is madness—and no amount of mansplaining from billionaires will be adequate to justify it."