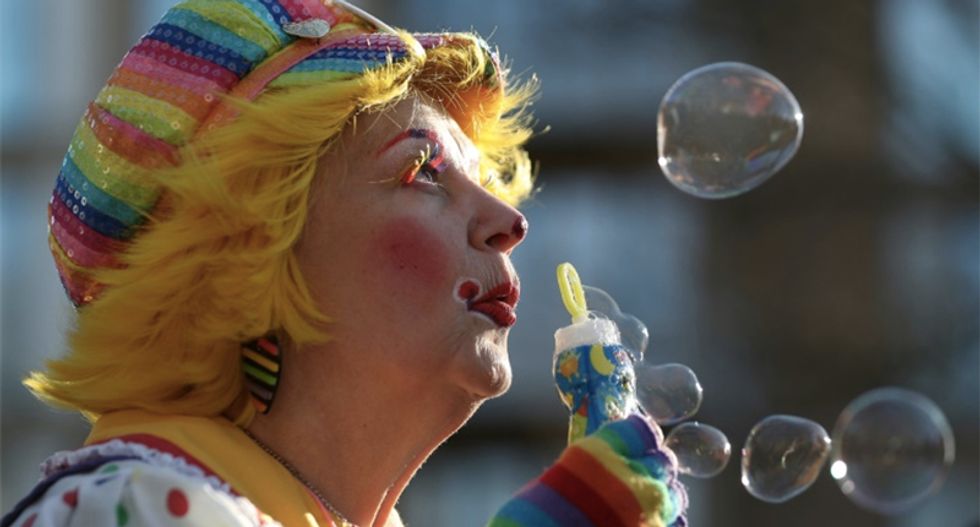 The streets of east London erupted with slapstick humour on Sunday as clowns from all over gathered for the annual memorial of the legendary Joseph Grimaldi.

"King of clowns" Grimaldi was a 19th-century English stage performer, credited with inventing the white-faced, curly haired, red-nosed look that came to define the role of a clown.

Scores of devotees travelled by plane, by car and on foot -- wearing oversized shoes -- to the All Saints Church in Haggerston for the service, which has been held annually since 1947.

"We have people flying in from Canada, Ireland, from France, people coming down from Scotland" for the "funny reverential service remembering the legend," said organiser Bibbledy Bob.

Balloons and bunting hung above the normally sombre pews, which were taken over by wags wearing tiny hats, huge bowties and novelty flowers in honour of the English actor and comedian, who lived from 1778 to 1837.

Unicycles rolled down the aisles, while other fans sat holding custard pies throughout the service.

"There's many ways to become a clown, you only have to look at the Houses of Parliament," he joked.

"If I told you that David Beckham was coming today, you'd totally believe me, there's paparazzi from all over the world."

Grimaldi became the most popular entertainer of the Regency era of the early 1800s, performing in pantomimes, notably in London's West End.