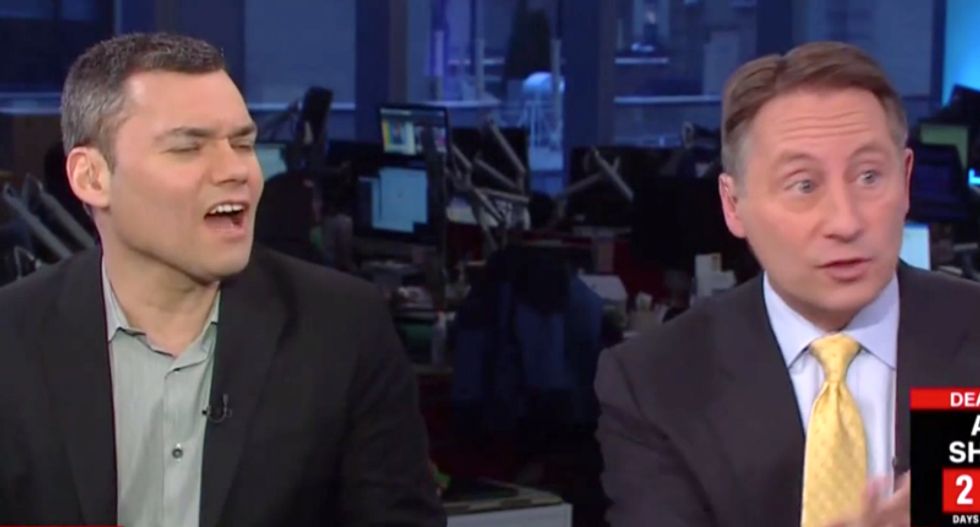 CNN contributor and member of President Donald Trump's 2020 re-election committee Rob Astorino probably wished he canceled his Wednesday appearance on the network after host Brooke Baldwin and his fellow panelist, the Forward's Peter Beinart, took turns rope-a-doping him for calling out Congresswoman Ilhan Omar's comments critical of AIPAC, while at the same time refusing to condemn the president's many racist remarks.

Baldwin opened the segment with footage of a Trump campaign ad that had been condemned by the Anti-Defamation League as well as his remarks about the "very fine" neo-Nazis that murdered a peaceful anti-racist protestor at the 2017 Unite the Right rally in Charlottesville Virginia, before turning to Astorino and asking "how do you explain that?"

"Well, it's amazing to me, Omar makes this statement and it's about 10% on Omar and 90% now on what Trump said in the past," Astorino replied. "Let's stick with Omar -- "

"Well, the president said she should resign," interjected Baldwin. Astorino then said that he disagreed with Trump, but Baldwin steered him back.

"But what about President Trump? Those clips we played?" she asked.

Astorino said Trump "said stupid things" and then mumbled something about Nation of Islam founder Louis Farrakhan. Baldwin pressed the issue, asking why the president hadn't condemned racists in his own party like Steve King (R-IA). Astorino demurred, which is when Beinart began losing his temper.

"There's no parallel between Steve King and Ilhan Omar," he said, and argued that the congresswoman had every right to criticize AIPAC and what he called Israel's "system of state-sponsored bigotry in the West Bank." Her tweet, he said, may have been artless "but Ilhan Omar is focused on fighting for human rights, could not be more different than Steve King, a kind of bigot across the board." That's when things really began to heat up.

Astorino said Omar's defenders were guilty of double standards, but despite being repeatedly pressed, could not explain how. He also refused to condemn House Minority Leader Kevin McCarthy, who has been accused of using anti-Semitism as a fundraising tool.

"How can we take you seriously as someone who's concerned about anti-Semitism if you only criticize anti-Semitism when it's coming from one party?" asked Beinart, who pointed out that the president has never apologized for his own racist remarks.

"Are you talking about me or the president?" asked Astorino.

"Yeah, you," shot back Beinart, getting personal. That's when Astorino said "everyone is offended by something."

On and on it went, until all three were shouting over each other.