Elizabeth Warren launches 2020 bid: 'Money has too much damn influence in Washington' 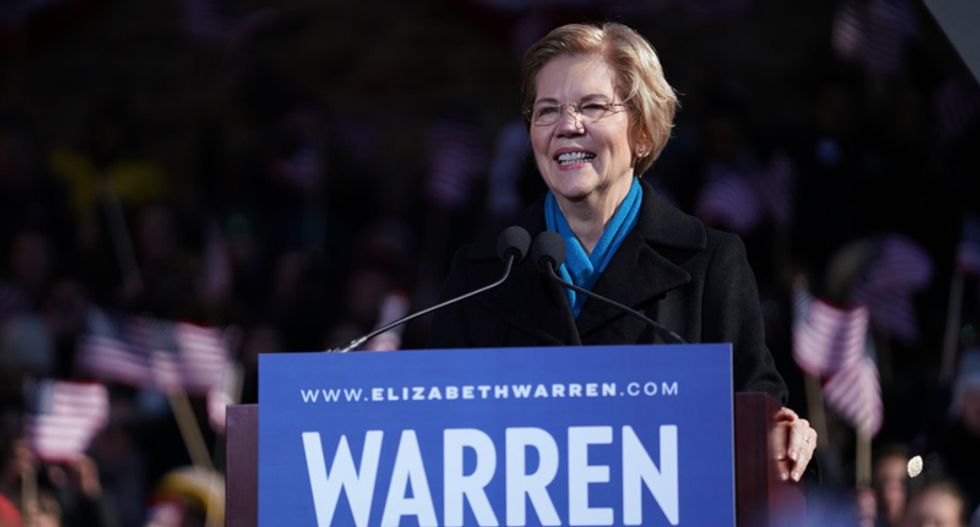 U.S. Senator Elizabeth Warren, struggling to move past criticism over her claims of Native American heritage, aimed for a fresh start on Saturday with the formal launch of her 2020 presidential campaign, saying that she is fighting for all Americans.

The Massachusetts Democrat, a leader of the party’s progressive wing, made her announcement from a historic site in Lawrence - a city northwest of Boston that was once the hub of textile mills and which launched the U.S. organized labor movement.

Warren, 69, has made workers’ rights, fair wages and access to healthcare central to her campaign.

“This is the fight of our lives. The fight to build an America where dreams are possible, an America that works for everyone,” Warren said. “And that is why I stand here today: to declare that I am a candidate for president of the United States of America.”

Warren is part of an increasingly crowded and diverse field of Democrats vying for the chance to challenge President Donald Trump, the likely Republican nominee.

A year before any ballots are cast in a Democratic primary, many of those candidates are spending this weekend talking to voters in the early-nominating states of Iowa, New Hampshire and South Carolina.

From Lawrence, Warren went north to New Hampshire, where she held a town hall meeting in the town of Dover and repeated her call for Democrats to eschew corporate political money.

“We gotta walk the walk; if we actually believe that money has too much damn influence in Washington, then change starts right here in the Democratic presidential primary,” she said.

Warren’s announcement will be followed on Sunday by U.S. Senator Amy Klobuchar, 58, who has said she will reveal her presidential plans in her home state of Minnesota.

Warren picked up the endorsement of the Progressive Change Campaign Committee simultaneously with her launch. The group could pump millions of dollars behind her candidacy and provide an outside attack dog against her Democratic opponents.

“We believe that Elizabeth Warren is the most electable Democrat and the best person to be president,” said Adam Green, the committee’s co-founder.

Warren’s heritage claims have dogged her since her first Senate campaign in 2012, and Trump mockingly refers to her as “Pocahontas.”

“Will she run as our first Native American presidential candidate, or has she decided that after 32 years, this is not playing so well anymore?” the president tweeted on Saturday. “See you on the campaign TRAIL, Liz!”

Warren’s ancestry drew fresh scrutiny earlier this week with the discovery that she described her race as American Indian on a form to join the Texas legal bar in the 1980s.

Warren has repeatedly apologized, saying the claim was based on “family lore,” and she now understands tribal sovereignty dictates membership.

In a statement, Trump’s campaign described her as a “fraud” and said the American people will reject her “dishonest campaign.”

Warren is one of four women so far seeking the Democratic nomination - an unprecedented number of female candidates vying to lead a country that has never elected a woman as president.

Warren and the other women running so far, including Senators Kamala Harris of California and Kirsten Gillibrand of New York, are hoping to build on the success of women candidates who played a significant role in Democrats regaining control of the U.S. House of Representatives in November’s congressional elections.

Lesley Thompson, 43, of Grantham, New Hampshire, had her support for Warren cemented after seeing her hold a town hall meeting, but knows many of her neighbors are still on the fence.

“She’s a fighter and I’m a fighter,” Thompson said.